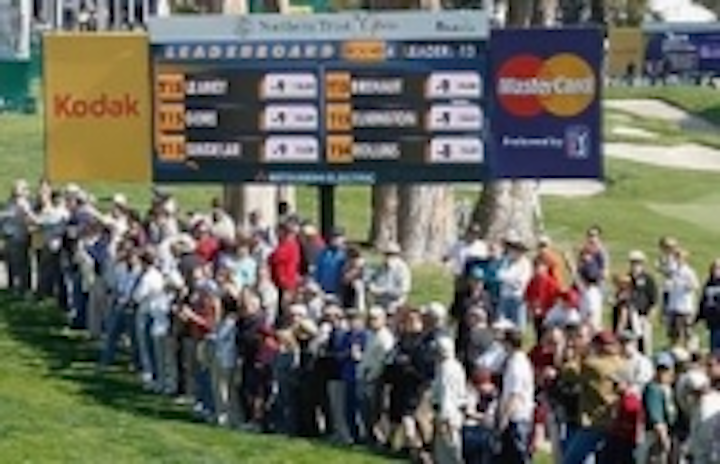 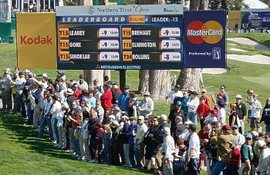 Mitsubishi Electric, the official HD-TV and outdoor video display provider of the PGA TOUR, is supplying 11 additional state-of-the-art Diamond Vision™ LED high-definition scoreboards for PGA TOUR events in the USA. The TOUR’s initiative to upgrade its scoreboard technology, begun last year, has proved exceptionally successful in providing a better on-site experience for fans. The overwhelmingly positive response from fans has prompted the PGA TOUR to increase its fleet of Diamond Vision electronic scoreboards.
The custom-built Mitsubishi Electric scoreboards made their debut at THE PLAYERS Championship in May 2007, providing a lively mixture of videos, player and course information, linked to the TOUR’s ShotLink real-time scoring system. Following that event, the 22 boards deployed at THE PLAYERS were divided into two touring systems of 11 which were phased in at subsequent tournaments.

“The feedback we’ve received about the first set of scoreboards was tremendous,” said Tom Wade, chief marketing officer for the PGA TOUR, referring to the original Diamond Vision scoreboards. “We originally planned to have 11 boards on the course, but they have been so popular that we’re now putting one at almost every hole.”

The Diamond Vision scoreboards bring a new level of interaction and excitement to PGA TOUR tournaments. Thanks to the full-color capabilities of the Mitsubishi Electric scoreboards, fans are treated to animations, personal player profiles including images and action shots, and broadcast-quality graphics just as crisp and brilliant as those seen on Diamond Vision stadium and arena displays.

“We are always looking for ways to enhance the spectator experience at our tournaments, and the Mitsubishi Electric scoreboards have become a very important element of this initiative,” said Wade. “Not only are we extremely pleased with what we already have been able to provide the fans through the scoreboards, we are excited about developing compelling new elements that we can include. The addition of these 11 scoreboards will further our efforts to inform fans about our players and the competition.”

Familiar to golfers the world over, the PGA TOUR travels extensively around the US and the world, promoting the game and giving golf fans the chance to see the professionals in action first-hand. In 2008, the three Tours will compete in approximately 108 events for approximately $355 million in prize money. Tournaments will be held in nine countries outside the U.S. and in 37 states.