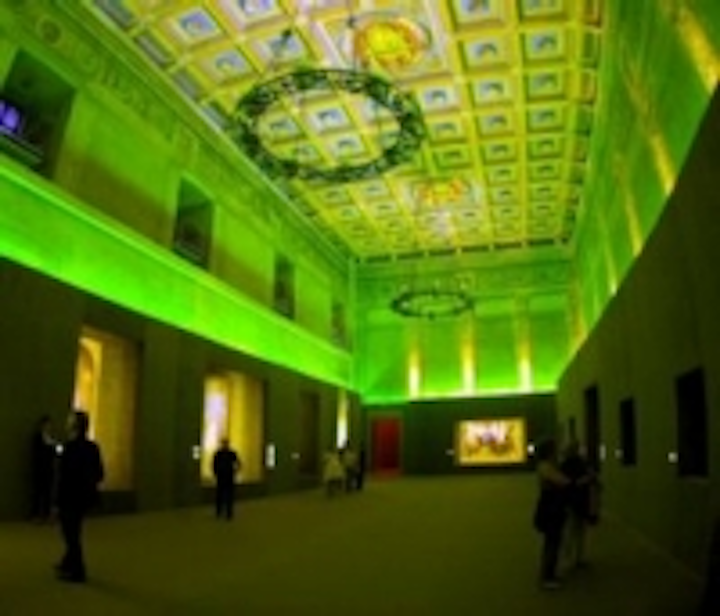 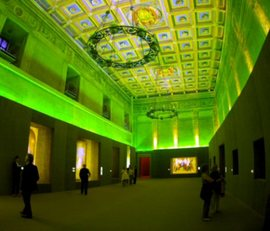 A wide range of Coemar LED lighting effects was at the centre of a groundbreaking art exhibition recently at Rome’s Palazzo Venezia.

Lighting designer AJ Weissbard — whose experience at the top end of theatre, opera, architecture and fashion has seen him working with artists such as Robert Wilson, Peter Greenaway and Giorgio Armani — was the man responsible for presenting the work of Renaissance artist, Sebastiano Del Piombo, using principles new to the art world.

The exhibition is the first devoted entirely to the work of the Venetian master. Curated by Claudio Strinati and produced by MondoMostre it marks AJ Weissbard’s first collaboration with Luca Ronconi, artistic director of Piccolo Teatro di Milano, and stage designer, Margherita Palli.

The American LD was offered the project back in April 2007 as a result of a mutual collaboration with Palli, and he immediately recognised the importance of the first retrospective of the artist’s work on this scale.

AJ Weissbard had wanted to break from conventional track lighting, using halogen and fluorescent sources, and apply an LED solution; as the exhibition was quintessentially Italian, he favoured the idea of using a local producer, and turned to Coemar. “I thought it was important for the exhibition to keep as many materials in one company in order to manage costs and maintenance.”

Working with LED he also knew he could protect the paintings from heat and excessive light, with low power consumption, long life and easy maintenance providing further advantages. “Everything was designed to take the way we use these components to another level.”

In huge rooms of up to 450 sq. metres (and 10m high) the designer took a volumetric approach to the space, to determine the quantity of light necessary. His approach was to light the entire volume of the main spaces in order to cradle the paintings in light. The project incorporated Coemar PCB 3 LED’s (each containing 3 x 1W Lumileds), and Coemar LineaLED 1/25 in 3200 Kelvin colour temperature with multiple sources for each painting, and a mix of Coemar PinLite LED’s and ParLite LED’s to supplement other equipment to light each space in its three dimensional entirety.

Luca Ronconi had suggested that he wanted the lighting to pull the visitor physically along on a journey in a cinematic fashion — a voyage of discovery, a way of seeking something new. And it was Coemar’s PCB fittings that largely enabled AJ to achieve the desired effect.

“I haven’t found another product on the market that does what the PCB does — these were the workhorses of the paintings. I treated them with tinted colour correction filters and the paintings depended on this because there was no other architecture to hang any traditional front-lighting fixtures from.”

The lighting is powered by Coemar Regoled and Regobox LED drivers, sending 12 channels of DMX to an ETC Expression computerised master controller and then onto DMX recorders for playboack. All equipment was supplied by Milan-based company, Volume.

Although he and his lighting team, comprising programmer Giuseppe Grilleta, electrician Marcello Lumaca, and co-technician Aliberto Sagretti, were initially apprehensive about using new product (and had considered using MR16’s). But it was the DMX support which Coemar’s PCB offers, that became vital to the project. “Since every painting was to have a unique solution I wanted the flexibility and versatility offered by the different Coemar effects, where I could balance intensity on each individual painting.”

This was a radical departure from the more traditional design approach of placing heavy lighting on the wall and then adding further spots to make the art stand out from the white background. Explains Weissbard, “This show was different in that every painting has its own unique light plot and is studied for balance of intensity and adjusted for colour.” In other words the lighting was specifically focused on details within each masterpiece to bring out the depth rather than being swathed within a general wash.

And with clever projection of the distance between the aperture and the painting he has been able to pull off some focusing tricks and treat each painting “as its own little stage”, eliminate the perception of the source of the light and even avoid sources reflected in the glass protection found on many of the paintings.

What enabled the designer to conceal every light source (and contain any extraneous light) was the ingenious construction of a double wall infrastructure.

He explained, “By modifying the structure scenically visitors could concentrate on the art and the paintings appeared to float in space and come to life in front of them.”

Initially the treatment he proposed concerning the double wall had caused some consternation. “But this was important as it has enabled us to produce some really powerful effects. It allows each masterpiece to be viewed individually without peripheral distraction. In other words you only see the painting once you stand in front of it.”

The exhibition itself is built around three main rooms — the Sala Regia, Salle delle Battaglie and Sala del Mappa Mondo — containing nearly 40 of del Piombo’s paintings and another 15 or so drawings and monographs; the two final rooms are dedicated to showing the impact of his work on other artists.

Each room was lit distinctly with reddish, green and blue themes of static uplit wall washes from the PinLite LED’s within an overall backdrop of fluorescents and HMI PC fixtures which served to not only as an impact of colour, hide defects in the decaying walls, but also to draw out the deep colours in the paintings themselves

Low power requirements and heat dissipation made the task of creating a ‘micro climate’ within the museum (to control temperature and humidity) relatively easy — and the entire extravaganza is powered simply from conventional wall sockets. “The museum was in a state of disrepair and the fact we didn’t want to add another electrical service was fundamental to protecting both the environment and the cost,” he says. “The whole thing was carefully studied.”

In summary, the designer says, “Using the Coemar fixtures I have been able to produce some looks which I think are quite unique, and of which I am particularly proud.” His approach was so fastidious that some LED fixtures were still being tested as late as December — with the exhibition due to open in February.

Coemar sales manager Giorgio Radice stated, “We are delighted to have had the opportunity to supply the fixtures for the first major exhibition in which the paintings of such import have been lit exclusively by LED. It is a confirmation of the efforts we are putting into product development, and I consider this sends out an important message.”

As for AJ Weissbard, as a result of the Sebastiano Del Piombo collection he hopes he has helped to revolutionise the way in which museum exhibits and art gallery masterpieces will be viewed in the future.