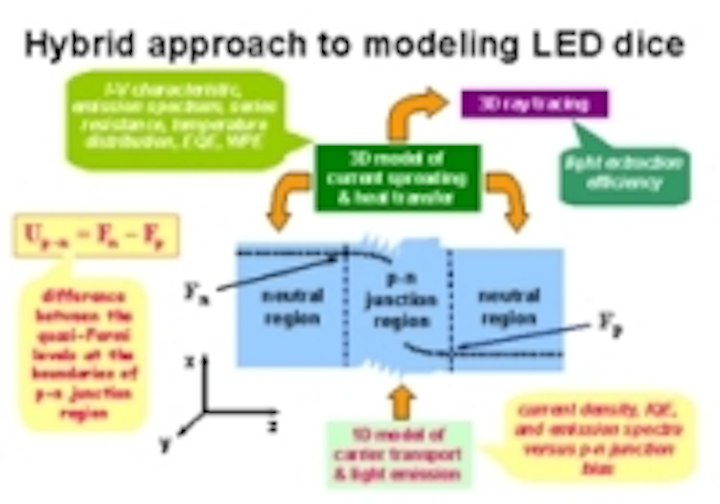 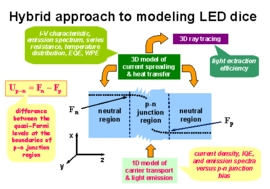 STR Group has released new version of SimuLED software package (http://semitech.us/products/SimuLED). The software concept is based on the hybrid approach presented in the figure, allowing effective solution of multiscale and multidisciplinary problem. The software was developed as an engineering tool for LED and laser diode design and optimization and is already used all over the world.

A presentation illustrating software capabilities is available at the STR website (http://load.str-soft.com/Data/SimuLED/SimuLED_October_2008.pdf).

SimuLED consists of 3 compatible software tools: SiLENSe, SpeCLED, and RATRO modules. A brief description of options is listed below.

The SiLENSe software tool (http://www.semitech.us/products/SiLENSe/) is aimed at 1D drift-diffusion analysis of electron and hole injection into the active region, and their radiative (and parasitic non-radiative) recombination. SiLENSe 4.00 released recently operates with heterostructures grown not only on polar but also on non-polar and semi-polar substrate/template orientations.

The SpeCLED package (http://www.semitech.us/products/SpeCLED/) provides a 3D analysis of current spreading and temperature distribution in the whole LED chip.

Last release of the SpeCLED program supports new die elements:
- A current spreading layer like ITO placed on the p-contact layer is now available.
- Substrate was included into the computational domain. Current spreading and heat transfer in conducting substrates and heat transfer in insulating substrates are supported.
- Electrode pads were included into the computational domain. Voltage drop inside the pads is taken into account.

New models of the die surfaces were implemented into the last RATRO release:
- A model of a multiple metal layer contacts to be applied to p- and n-electrodes.
- A model of regularly patterned surfaces to be applied to free semiconductor or substrate surfaces.
- Specification of wavelength dependence of refraction and absorption indices of the semiconductor, substrate and epoxy materials.
- Simulator operates now with the polarization light predicting polarization degree in the far field.
- Both isotropic and Lambert laws of emission from the active region are supported.