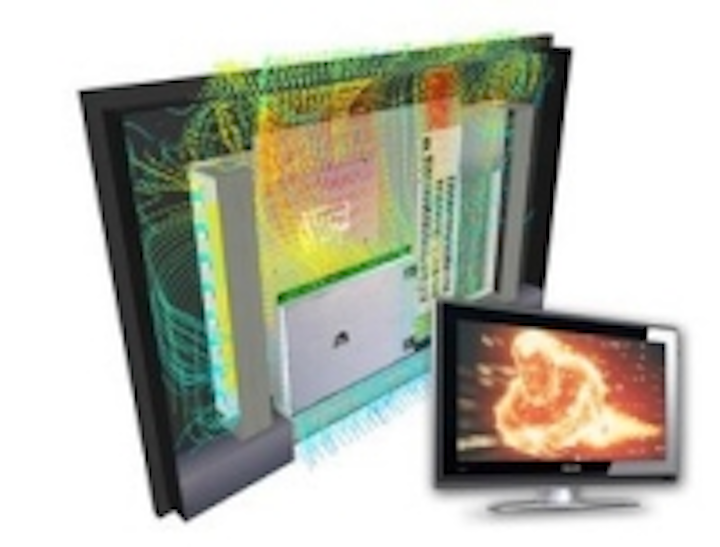 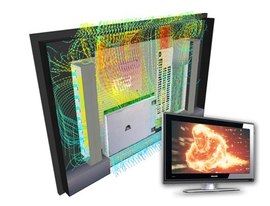 “Thermal simulation enabled us to understand the thermal impact of our design decisions long before prototypes were available,” Martin said. “As a result, we saved a considerable amount of time and money by getting the design right the first time from a thermal standpoint.”

Reviewers are suggesting that the new Philips Aurea 42 inch LCD TV represents the future of television. A total of 126 power LEDs placed around the screen create a multitude of segments that fuse into one soft surround of light in the active frame, directly enveloping the screen and flowing seamlessly into a soft halo on the wall. With the LEDs added around the display and electronic components it was clear from the beginning that thermal management would play a critical role in the design process.

Accordingly Martin began working very early in the development process to perform an architecture study with the goal of defining the effect of critical mechanical design choices on cooling.

“Thermal simulation is the ideal tool to address this type of design challenge because it enables us to accurately evaluate a wide range of design options in a minimum amount of time,” Martin said. “Thermal simulation provides the temperatures that determine whether or not the design is able to meet the specifications. Thermal simulation also provides diagnostic information including airflow, temperature and pressure at every point in the solution domain. This information helps us understand why a particular design is performing the way it is and in many cases helps guide us to rapid improvements.”

“We use FloTHERM computational fluid dynamics software for thermal simulation because FloTHERM provides a wide range of tools specifically designed for modeling electronic components and allows us to run large models,” Martin said. “These tools greatly reduce the time needed to model complex electronic assemblies. We have used FloTHERM for many years and over this time have compared its predictions to physical tests on many occasions. FloTHERM has consistently demonstrated the ability to accurately predict temperatures and other important performance parameters. We have developed many successful products with FloTHERM in considerably less time than would be required without simulation.”

Martin created a simplified model of the new TV set based on the limited information that was available in early development phase. Martin used the model first to investigate the effect on thermal performance of various mounting plate, back cover configurations. Martin provided the information shown here as well as other thermal simulation results to the team that was responsible for mechanical design of the new television.

“Simulation gave us insights into what would and would not work from a thermal standpoint,” Martin said. “As a result, we were able to iterate to an optimized design much faster and at a lower cost than would have been possible using traditional build and test methods.”