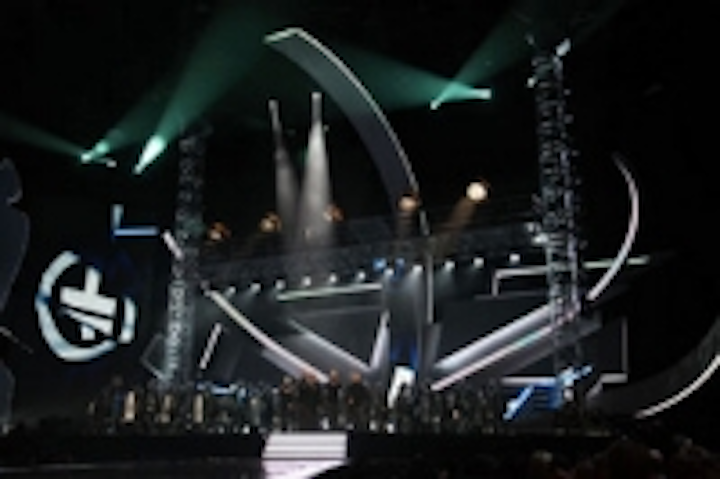 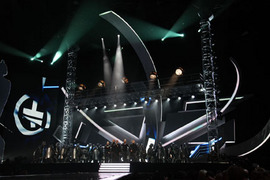 A completely new look Brits effervesced with style and vibrancy making it one of the most visually exciting to date, with video playing an integral role in the design and setting in a radical format change.

XL again followed their highly successful model of splitting the project management duties between Chris Saunders, who oversaw the camera and playback elements (celebrating his 17th Brit Awards!) working alongside Paul Wood, who managed the screens, projection and specials packages for the various live artists.

Chris Saunders says, "It was great to be working on The All New Brits, specially in a new venue and with a new format, celebrating some of the best musical achievements of the last year in a show that continues to advance, evolve and push boundaries in technical and presentational goals, this was a stunning show with the emphasis on the musical performance, and it worked!”

Peter Bingemann's stunning set design comprised an 'exploded' Union Jack flag, with custom built video flourishes, XL supplying all the main elements including an eye-catching 20 metre wide by 22 high St George's Cross made up from Pixled F11 screen surface. The set and screen support structures were constructed by Steel Monkey, and XL dispatched the panels for the St George's Cross element of the structure to be pre-built at the Steel Monkey workshop in Bristol.
The stage had a long thrust going out into the VIP seating area, with a second stage at the end of it that hosted all the awards presentations by James Corden and guests.

XL supplied more F11 to make up the two main on-stage screens. The first was a landscape format 11 metres wide by 6 high central screen, which flew in and out (downstage of the Union Jack) on a Kinesys automation system between performances, This was utilised to display all the Awards nomination packages and VT inserts.

XL's package also included a GV Kayak HD PPU and 2 x Sony HXC 100 cameras, which together with 12 feeds supplied by host broadcaster CTV were mixed by live video director Nick Fry and output to the IMAG screens via XL's Barco Encore screen management system. The playback systems were managed and engineered for XL by Richard Turner and Richard Burford.

XL also supplied extras for some of the live acts including Arcade Fire in the form 4 x Barco FLM22 22K scenic projectors and a Catalyst playback system which covered part of the set, plus 5 square metres of Barco I12 12 mm indoor LED attached to the riser fronts for Tiny Tempah.

Content for the Awards elements was supplied by Hello Charlie. Most of the performance playback videos were sync’d to timecode and stored on 2 x GV Turbo 2 hard drives and virtual VTRs. Sam Pattinson created the footage for Take That's appearance and Richie Stembridge produced the visuals for Arcade Fire.

The Red Carpet area is a main focal point of The Brits, and this year XL supplied 23 square metres of Stealth 25 mm LED in 12 strips and another Hippotizer playback system.

Paul Wood comments, "As one of the highest profile events on the British music calendar, we are always proud to be involved in The Brits - the production values are high, the design and presentation is always ambitious and the results very rewarding".