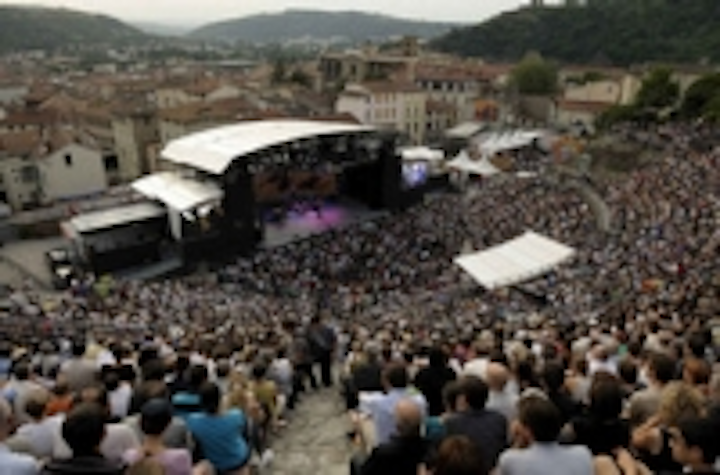 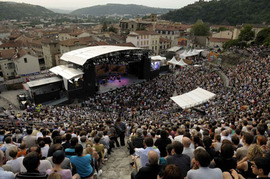 A Jands Vista T2 lighting console running the new Vista v2 software was used to control all the moving, conventional and LED lighting on the main stage at the 31st Vienne Jazz Festival in France. A Vista I3 console, also running Vista v2 software, acted as a tracking backup.

The main stage for the glamorous 31st edition of the legendary two week Jazz Festival was located in the magical Le Theatre Roman, a near 8,000 capacity amphitheatre in the centre of the picturesque town, formally one of the largest urban theatres of the Roman Empire.

The lighting equipment was supplied by Lyon based rental company GL Events. The main stage production lighting design was created by Christophe Paillet and Matthieu Aufort, with Christophe acting as the main programmer and operator.

With the stellar musical line up, the pressure of daily live TV broadcasts from the festival, and many season ticketholders attending multiple shows, the lighting design had to be versatile and variable enough for each artist to have a distinctive look and feel to their set.

It was the first time that GL Events had used the Jands Vista platform, having only recently taken delivery of six new consoles from Jands' French distributor - Montpelier-based ESL. After a little training, they were confident that the time was right to use the speed and flexibility of the Jands Vista v2 software on this high profile event.

Says Christophe, "Each day Vista v2 helped us in our creative process. The effects in particular, that are available with Vista enabled us to effectively have a 'new' lighting rig each day." He adds that even after two weeks of solid re-programming, he and his team were not running out of either ideas or options, and the Vista kept delivering precisely what they were looking for.

GL Events were ready to place an order for new consoles with another manufacturer until ESL suggested that they should take a look at Vista v2. After they had a demo, and then conducted some in depth tests with the Vista, they were so impressed that they ordered two Vista T2 consoles and four Vista I3s. They are delighted with their choice. "It is very powerful and is intuitive, quick and easy to set up and programme" says Christophe of the version 2 software.

Vista v2 was designed from the ground up to allow all levels of user to get the most from whatever mix of technology they have available, whether dimmers, moving lights, LED, or video.

Christophe further comments that the service from ESL and also from Jands themselves has been excellent. ESL were "super-active" in ensuring that GL Events received their consoles in time for the Vienne Jazz Festival - for which they also supplied lighting to several other stages and venues, with a second Vista crew comprising Alexis Billard and Jérémie Halloin.

The lighting rig for the Le Theatre Roman stage was a mix of moving heads from Clay Paky, Martin Professional, Robe and VARI*LITE - about 70 in total. There were 20 Starway MiniKolor LED units and 12 LED PARs, plus a wide selection of generics including 2Kw fresnels, assorted profiles and 20 Sunstrips - all controlled from the Vista T2.

Christophe really enjoyed working on the Vista consoles and comments, "The v2 software really gives the Vista range the potential to become one of the most specified and successful consoles, especially if Jands keeps developing its software along this same trajectory. It is so quick and easy to programme”.

Olivier Torres from ESL adds, "Vista v2 is indeed a huge jump forward. You can now control moving heads, conventionals, LED and digital sources, and all types of video and media inputs in the same style and with the same functionality - very quickly and straightforwardly!"

Jands Europe’s Neil Vann says, "The guys at GL Events are so pleased that they took a look at Vista v2 before buying anything else, and we are not surprised that they were so impressed with what they saw. Vista v2 offers the power found in top level consoles, but the simplicity to make it accessible. This gives companies the freedom to get the most utilisation from their consoles on a wide range of style and scale of show with multiple levels of operator."

GL Events is delighted with its Vista purchase. After the success of the Vienne festival they are already specified on upcoming high profile events including EQUITA, a huge equestrian and agricultural show in October, and the world famous Lyon Fêtes des Lumières (City of Light) festival taking place in December.