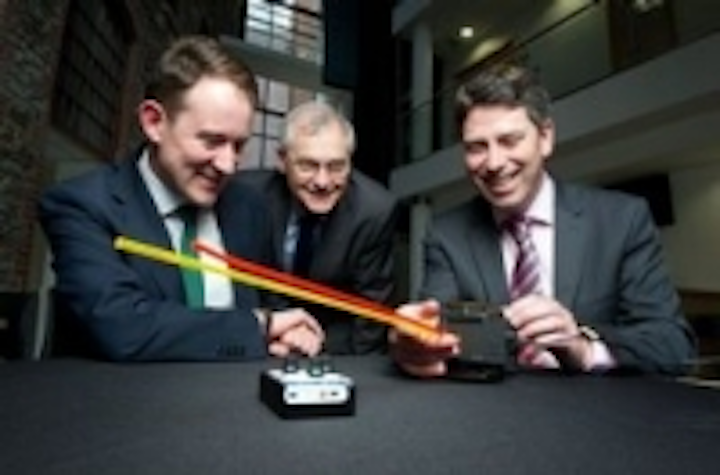 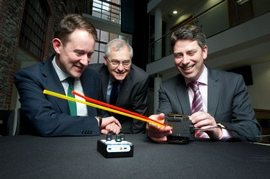 Minister for Research and Innovation Sean Sherlock T.D. has launched a high-tech spinout InfiniLED Limited at Tyndall National Institute, UCC. InfiniLED is commercialising a new generation of LED technology, which significantly extends the battery life for portable devices such as cameras, mobile phones and laptops as well as for various medical and analytical instrumentation by producing more usable light, using less energy.

Speaking at the launch Minister Sherlock praised the effective use of research and development investment in the creation of this new high-tech business. As we strive to embed the knowledge economy in Ireland it is vital that we maximise the return on the significant investment Government is making in research and development. InifiniLED is an excellent example of the type of company that we want to see emerge from this investment. One that will grow, develop and create the jobs this economy needs .

The Micro LED technology was invented by a team of researchers led by Mr. Brian Corbett at Tyndall National Institute, supported and funded by Enterprise Ireland. Under the EI Business Partner Programme, Entrepreneur Joe O'Keeffe, who has already spun out a series of successful companies, evaluated the commercial potential of the Micro LED leading to today s launch of the company, InfiniLED.

"Portable device manufacturers are continuously in search of new technologies that provide end users with extended battery life, while reducing energy usage. Our Micro LED technology extends battery life by up five times relative to the current state-of-the-art for any device with an LCD display," according to Joe O'Keeffe, Interim CEO of InfiniLED and serial entrepreneur. "The Micro LED technology brings performance advantages across a broad spectrum of applications. Already, products have been developed to serve LCD display, medical and analytical instrumentation and maskless lithography markets. InfiniLED is actively seeking new applications, new customers and new licensing opportunities. We are in the process of raising investment and we invite any interested investors to contact us at info@InfiniLED.com," added Joe O'Keeffe.

"This is an excellent example of a successful collaboration between researchers, UCC s Technology Transfer team and external entrepreneurs. We are delighted that Dr. Bill Henry, who as a Tyndall employee worked on indentifying commercial opportunities for the technology, has now joined InfiniLED as Chief Commercial Officer. InfiniLED will continue to access our facilities and expertise in the further development of the Micro LED technology under an access agreement between InfiniLED and Tyndall," explained Professor Roger Whatmore, CEO Tyndall National Institute.

InfiniLED is a next generation Light Emitting Diode ( LED ) development and production company based in Cork, Ireland. The Company s strategy is focused on achieving significant market share in certain sectors of the vast and fast growing LED market through its ground-breaking LED (Micro LED) by forming partnerships with major global manufacturers of LED dies and wafers.The LED is a next generation LED technology developed specifically to deliver more usable light using less energy.

InfiniLED is targeting initially the following three market segments, where the LED's advantages will be most effective:

>> Back Lighting for mobile phones, TVs and monitors, where the benefit is reduced energy consumption and extended battery life
>> Analytical / Point Of Care / Medical Instrumentation, where the benefits are battery life extension and size reduction via simplified heat sinking and the elimination of optics
>> Maskless Lithography, which can be enabled through the production of micro arrays of LEDs

The benefits of InfiniLED's LED technology give it a significant and sustainable competitive advantage in the market.

Joe O'Keeffe is a serial entrepreneur having been a founder and/or a member of the executive team in Irish high-tech start-ups such as EnBIO, PlasMedica, SensL, Nanocomms, MVT Technologies, Pentus and Inflow DNX. Recognizing the obstacles which inhibit more commercial output and start-ups from government investment in R&D, Joe has recently created ScienceWorks Ventures, a technology investment and development company to fill the gap between the world class R&D taking place in Ireland and the low number of high-tech start-ups coming out of this R&D. ScienceWorks identifies and acquires innovative technologies which are not being commercialized and is creating a portfolio of high growth businesses out of them. InfiniLED is a ScienceWorks portfolio company.

Tyndall National Institute, University College Cork is one of Europe's leading research centres. With ca 450 staff, students and academic & industrial / visiting researchers. Tyndall undertakes internationally-leading research into information and communications technology hardware for applications in the digital economy, energy, healthcare and care of the environment. Tyndall uses its facilities and expertise to support industry and academia nationally and provides large numbers of highly qualified graduate students, key to the development of Ireland s national economy. Tyndall has over 200 industry partnerships and customers worldwide. Several start-up companies in Ireland have been based on technology originating at Tyndall. The Institute s researchers include 125 PhD and 10 Masters students. 38 nationalities are represented within the institute at all levels, with its research published in 200 peer reviewed publications last year. Income for 2010 was over 33m.

The aim of the EI Business Partners Programme is to identify, engage and support entrepreneurs to capitalise on the rich portfolio of research within the academic sector and create start-up companies. The Business Partners Programme introduces entrepreneurs with a strong track record of commercial success to research teams that have developed commercially-viable technologies. The aim is to increase the number of companies emerging from publicly-funded research.

UCC s Office of Technology Transfer was established in 2007 with the aim of commercialising the deep pool of intellectual property in the University. Working with industry, academia and agencies to establish dynamic and valuable partnerships, the Office matches cutting edge technologies with real market needs and challenges to enhance the economic and social returns of the investment in research. Since 2007, UCC has licensed over 50 technologies to indigenous and multi-national partners. In that period, UCC has also established 8 campus company start-ups, most of which were partnerships between the University and external entrepreneurs.