dbn spaces out at Jodrell Bank 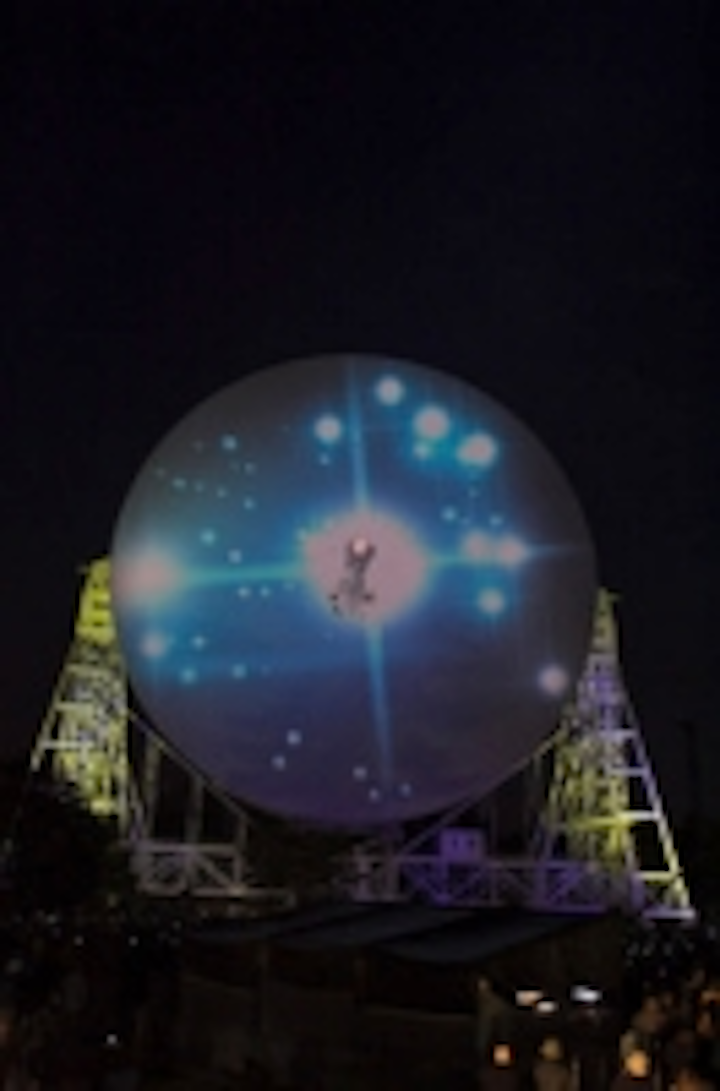 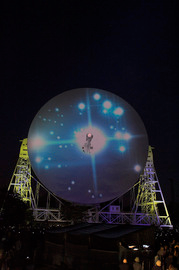 Jodrell Bank Observatory this is .... the site of the UK's iconic Lovell radio telescope, the third largest steerable radio telescope in the world and the majestic piece of engineering and architecture presiding over the first of a potential new series of live concerts.
Manchester based dbn was asked to provide lighting by co-promoters Ear To the Ground, who were collaborating with Kendall Calling and The Warehouse Project to stage the event in this unique setting, headlined by the Flaming Lips. Also on the bill was British Sea Power, OK GO and two other bands. A 5000 capacity audience enjoyed the fun and the astrophysical vibes of a beautiful summer day.
dbn's project manager Nick Walton comments, "It was a fantastic opportunity to work in a very special place overlooked by one of the most amazing scientific instruments in the world. Everything went smoothly and it was a massive success all round. We hope this will be the first of more events here".
The 12 metre orbit stage was situated just to the right of the 76 metre wide revolving telescope Dish, which despite its colossal proportions, created a very harmonious perspective when moved into position for the show so the face of the dish pointed towards the audience. Projections were beamed on to it during the Flaming Lips' set, and a custom 3 minute video work was screened on the Dish before the band's encore.
dbn's brief was to provide stage lighting for all the bands - accommodating the Flaming Lips spec from LD Ian Turner, who is also the LD for British Sea Power. Although not actually stipulated, Walton and dbn made the decision to also light the framework, legs and pivotal elements of the Dish - a mass of criss-crossing white-painted steelwork, which is perfect for illumination. "It was an opportunity not to be missed that took the concept of truss toning into another spatial dimension," enthused Walton, "As well as being a functional working tool, it is a stunning piece of architecture, and I really loved doing it".
Around the perimeter of the Dish he positioned a selection of Studio Due City Color wash lights - a mix of 1.8 and 2.5Ks, plus a quantity of i-Pix BB4 and BB7 LED wash fixtures. Walton was keen to get the richness and deep quality of light from the LED fixtures and combine it with the arc lights.
Two high powered Flower effects were located the other side of the Dish and blasted through the framework towards the crowds for the finale.
The stage lighting was more conventional!
dbn sub hung 2 main trusses, which were jointed using custom hinges that angle the metalwork very efficiently around the orbit's roof space, maximising the 8 metres trim height. They also flew a one metre truss piece for the Flaming Lips' mirror ball.
Rigged onto the two main trusses were 10 Clay Paky Alpha Spot 1200 HPEs, 8 Alpha Spot 700 HPEs and 16 Alpha Wash 700s.
On the deck were 4 Robe ROBIN 600 LEDWashes for low level coverage and 2 x i-Pix BB16s for powerful cross stage washes.
dbn supplied 10 Martin Professional Atomic strobes for the 'production' lighting rig, and for audience illumination, a collection of 2 and 4-lites hung on the front side of the first truss, supplemented with additionals from the Flaming Lips' floor package. This also included a 6.5 metre high arch of Stealth LED screen, framed with Sunstrips, which had to be moved on and offstage, extra strobes, Chroma-Q DB4s, and 4 smoke machines - which worked together with 4 from dbn - and a multi-coloured laser.
Ian Turner also brought in his own Chamsys MagicQ console to run the Flaming Lips show, while dbn’s Avolites Pearl Expert was used to run all the other bands’ lighting and the Dish lights.
Nick Walton worked with a crew of 4 for the in and out - Nick Buckley, Andy Kennett, Colm Whaley and Moss Everhard. They set up on the Friday morning ready for a Saturday show, leaving a night free for programming. The thoroughly slick operation encountered a few challenges, the main one being the fact that it was a cell phone free environment whilst the dish was in operation during the build! However, this also had its advantages - and there were also no excuses for leaving anything back in the warehouse!
Sound was supplied by another local company, Audile, and projection was co-ordinated by Pod Blumen of Bluman Associates, who used 6 x Christie 20K machines overlaid to create one super-bright picture on the Dish.
Apart from enjoying a great band line up and glorious weather, the crowds were also treated to two appearances by Dr Tim O'Brien, Reader in Astrophysics from the Jodrell Bank Centre for Astrophysics, does who was instrumental in helping make the show happen.
He gave two short and highly entertaining talks about the Lovell Telescope, highlighting facts and figures, explaining how it had been 'pimped' over the years with the latest in space communications technology since its inauguration in 1957. Using audio samples, he elucidated on the various rhythmic sounds made by pulsars, quasars, masers, meteors and gravitational lenses and other astrological phenomena as they spin through the universe millions of miles in outer space, observed and listened to by scientists worldwide via the Dish.