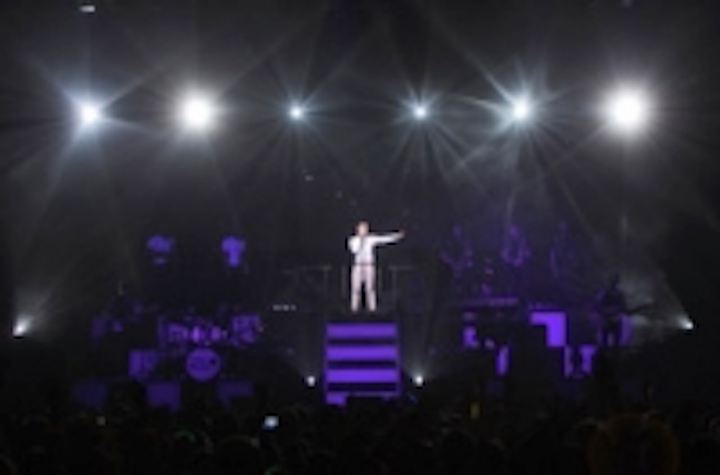 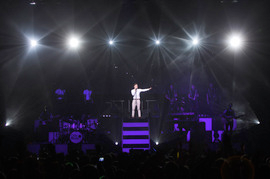 The chart topping singer/songwriter and runner up of X-Factor 2009 has evolved a live performance style of his own, cutting a new and fresh model from that of other successful reality TV contestants who follow up with solo careers. Show producer Beth Honan's stage set was designed with a ska/2 Tone flourish, and Murs' performance included some Madness inspired quirks and a generally up-beat, jaunty tone, backed by a stonking 9 piece band including full brass section. His natural wit and humour was also integral to the show.

The lighting design was created by Phil Wiffin for HSL. Dave Lee operated and looked after everything on the road, working alongside tech Johnny Harper. HSL's project manager Mike Oates comments, "Once again Production North compiled a great team to produce a versatile, entertaining show with high production values. It was good to be working with production manager Sarah Hollis again, and exciting to be involved with a talented artist at the start of his career.”
The lighting rig was designed to fit into a variety of venues - from arenas of up to 5000 capacity to theatre spaces for around 2000, including a run of sold out 'homecoming' shows at Essex Boy Murs' 'local', Southend Cliffs Pavilion.

Dave Lee and Phil Wiffin programmed the Hog 3 console during 3 days at Rhyl Pavilion, and had the show well in shape by the time they went into the first gig, collaborating closely with Honan in the process. Honan also commissioned all the show's video content which was produced by Tom Baristowe.

Dave Lee explains, "Beth had very clear ideas about things like colour and shape. She likes everything to look clean, symmetrical and ordered - very modern - and we never had more than two colours per look or song". There were also plenty of monochrome and white looks using different colour temperatures, and big, dramatic stabs and accents in strong white beams.

This general lighting aesthetic fitted snugly with the tiered stage set accommodating the band, its different levels fronted by Pulsar ChromaPanels - also supplied by HSL - giving a chequer board appearance harking back to ska fashion influences. A central stairway pulled all the architecture together, following the same well defined angular lines as the set and lighting.

Wiffin made another great job of maximising the lighting rig, just like the recent Alexandra Burke tour, which featured some of the same creative team.

The lighting rig was hung on 3 straight trusses.

On the rear chord of the back truss were 10 x 5 metres of Mainlight Industries Soft-LED low resolution LED drape (100 mm pitch), with a section of Pixled F-15, supplied by XL Video right in the centre. Video content ran simultaneously across both surfaces.

The back truss lighting fixtures were 6 x Vari*Lite V*L3000 spots and 12 x Robe ROBIN 600 LEDWashes - which Lee describes as "Very bright and absolutely brilliant". Three Robe ColorBeam 700E ATs were also used for strong back beam effects, along with the V*L s.

The mid truss featured 9 x Robe ROBIN LEDWash 600s used for general stage washing. Due to their light weight, only a span of 30 cm truss was needed.

The multi-level stage provided many opportunities to squeeze in some strategically positioned floor based fixtures, and there were 4 x V*L3000 Spots and 4 x Robe ColorBeam 700E ATs on the tiers, with a split-row of 8 x i-Pix BB4s along the upstage edge of the top level, rear-lighting the backing vocalists and brass section. Six i-Pix BB7s - 3 per side - washed the mid stage area and provided low level cross lighting on the musicians.

The 18 aforementioned ChromaPanels were also run into Lee's lighting console, and he had two RJ Cyrano 2.5K follow spots, also supplied by HSL, positioned at FOH.

The video ran from 2 x Mac Pro servers running Arkaos software, synched to the Fostex hard drives via a laptop, and controlled by MD Sean Barry, which ensured that visuals and music were harmonised.
The show started with a carnivalesque feel and full-on visuals except for the ChromaPanels that appeared in the third song. On the fourth number all the video disappeared and Murs was lit just with the VL3000s.

There was a gradual build which was then stripped right back again for the acoustic breakdown in songs 7 and 8, before gathering steam into a fabulous 4-song Stevie Wonder medley, which was always a real crowd pleaser. All the LEDWashes and the ChromaPanels worked hard on this section, with Lee using the LEDWash's zoom feature and smooth dimmer to create some stunning looks.

The show finished on a high note with Murs' two big hits "This One's For The Girls" and "Please Don't Let Me Go" - accompanied by a full on all-singing-all-dancing visual extravaganza.

Lee says, "The service and support from HSL was fantastic as always - not that we have needed much, as everything was so well prepped and in such excellent condition that it all ran like clockwork".
It was a rental company's dream tour - it went out, stayed out and returned a few weeks later with no-one hearing from them in between!