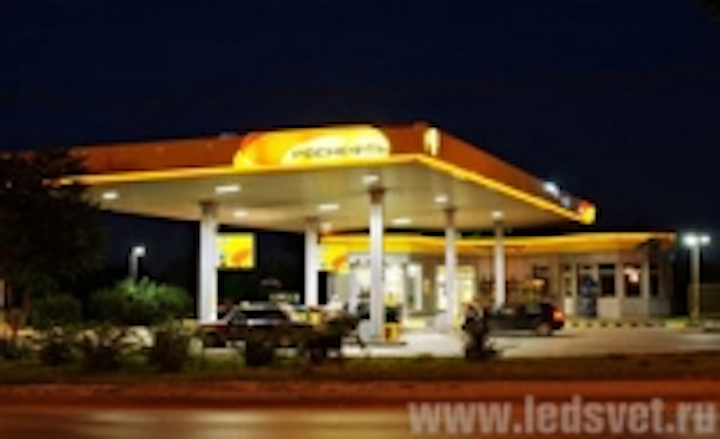 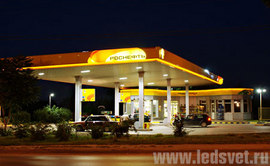 «FOCUS» LLC implemented lighting projects at the petrol stations of the oil company «Rosneft» throughout all Russia. Focus LED luminaires fully substitutes non-modern HID and fluorescent lamps. Have been made ​​complete replacement of mercury-vapor lamps with LED models on the perimeter of petrol stations and in interiors, achieved significant level of energy efficiency. Projects were implemented with outdoor luminaires USS-70 and USS-36, for roads we used USS-90 Magistral and for internal areas approached luminaires of SPO series.
«Rosneft» is the leader of Russia’s petroleum industry, and ranks among the world’s top publicly traded oil and gas companies.

«Rosneft» is widely engaged in exploration and production across all key hydrocarbon regions of Russia: Western Siberia, Southern and Central Russia, Timan-Pechora, Eastern Siberia and the Far East. In addition, the Company participates in several exploration projects in Kazakhstan and Algeria. Rosneft’s seven major refineries have convenient locations throughout the country, from the Black Sea coast to the Far East, and the Company’s retail network covers 41 regions of the Russian Federation.

«FOCUS» сompany was founded in 2004. Our professionals have great experience in the field of optoelectronics. The company began its activities with the development and manufacture of electronics for the special lighting fixtures on the orders of other companies — manufacturers. Now we produce lighting solutions for outdoor areas (USS series), office spaces (SPO series), industrial and warehouse buildings (PS and Bell (Kolokol) series), promotional billboards and facades, greenhouses, and also for landscape and architectural installations.

«FOCUS» сompany has a lot of innovative developments, patents, and implemented projects in the sphere of energy efficient technologies.
Our company positioned itself as a manufacturer of high quality products. Manufactured products satisfies the most stringent requirements for reliability. Our mission is to bring innovation to the market place and offer a greater consumer choice.
We appreciate the frank and open relationship and we value our reputation of reliable partner.

The "FOCUS" company was the first firm which joined the "Non-Profit Partnership for Manufacturers of LEDs and LED-based Systems," or LEDSM NP.

Aims and objectives of “Non-Profit Partnership for Manufacturers of LEDs and LED-based Systems”:
Mission:

Actively shape the market of LED products, ensure the development of LED industry in Russia.

Non-profit partnership of producers of LEDs and systems based on them created to make all the agents of the market be responsible for development and manufacture of LED lighting.

- Protecting and increasing the efficiency of investment companies in domestic production, technology, science, education in the LED and in related areas.

- Development of qualitative and quantitative market for LED technology.

- Formation of the rules and norms of functioning of LED market in Russia.