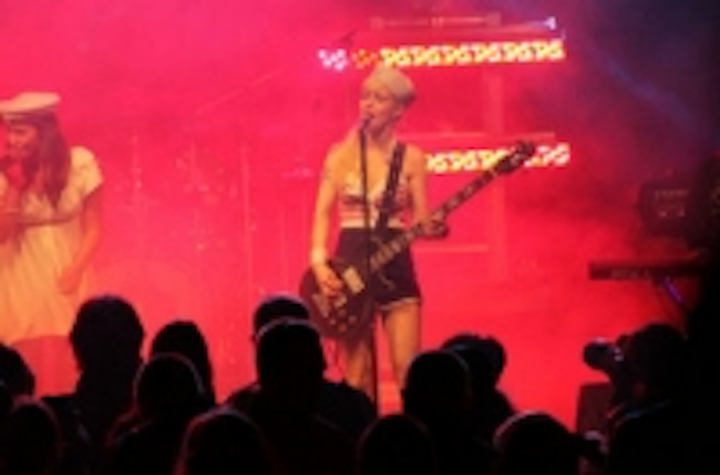 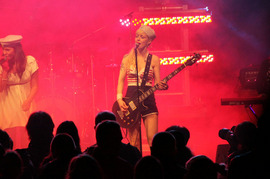 The one day event was attended by 2,500 people - far exceeding expectations considering the local population is only around 4,000. An action packed line-up included The Backstreet Girls from Norway, Swedish girlband Cocktail Slippers and many others who rocked the day away in great style!

The stage was a 12 metre wide by 10 deep ground supported roof, under which a series of production trusses were hung."My main objective was to provide an overall design that was diverse enough to give all the bands - and a Battle of the Bands competition - something unique and different for their sets" explains Ronny. This was a major reason he specified the Jands T2 console - running the new v2 software - for its powerful, quick and simple programming abilities.

"It's flexible, powerful, easy to use and gives plenty of scope for creativity, so I know I can put a show together accurately, quickly and efficiently" he confirms, adding that it's also one of the best desks he knows for working on-the-fly.

Talking generally on the new v2 software - launched at Prolight+Sound, Frankfurt to great excitement - he says "It's absolutely brilliant! I already liked version 1, yet this is even better - even more intuitive, much more powerful and definitely takes things to a different level."

Upstage of the band's backlines were eight Chroma-Q™ Color Force™ 48 LED battens mounted in four banks of two, which were used as blinder effects. These were chosen for their intense output and rich array of colours. Ronny thinks they are among the best blinder units currently available.

Ten Chroma-Q Color Block™ 2 LED fixtures were used for striking architectural illumination of the roof and its structural support towers. These are among Ronny's favourite fixtures and worked brilliantly as truss warmers on this show. "They are hugely versatile, bright, easy to fit in to any space and have an excellent dimming curve" he expands.

Far upstage was a ShowLED animation curtain, used as a changeable and funky backdrop, and on this same truss were seven Robe ROBIN 600 LEDWashes, a fixture that Ronny thinks is fantastic. The lighting rig was completed with eight strobes.

Content for the ShowLED curtain was stored and played back via a Green Hippo Hippotizer media server.

Lighting for the event was run by experienced Norwegian lighting programmer Lars-Erik Braatlie. "He did a fantastic job" says Ronny, explaining that programming time was limited, but using Vista v2 really helped produce a great looking show in a tight timeframe.

Vista v2 was designed from the ground up to allow all levels of user to get the most from whatever mix of technology they have available, whether lighting, LED, or media. Available in a wide range of hardware, Vista v2 offers both the simplicity to work fast, with the power to control the finest details, so everyone can focus on creating a great looking show rather than on programming a desk.

Jands Europe’s Neil Vann comments “On this style of event, where things are constantly changing, the flexibility and accuracy of Vista v2 really comes into its own. Just because you don’t know what the next act sounds like doesn’t mean you should have to compromise on how good the show looks - and Lars-Erik and Ronny are part of the ever growing worldwide family who prove each day that with Vista you don’t have to.”

The inaugural Spydeberg Rock Festival proved such a massive success that next year's event is already being planned, complete with an extra day, increased capacity, and a Jands Vista at front of house.