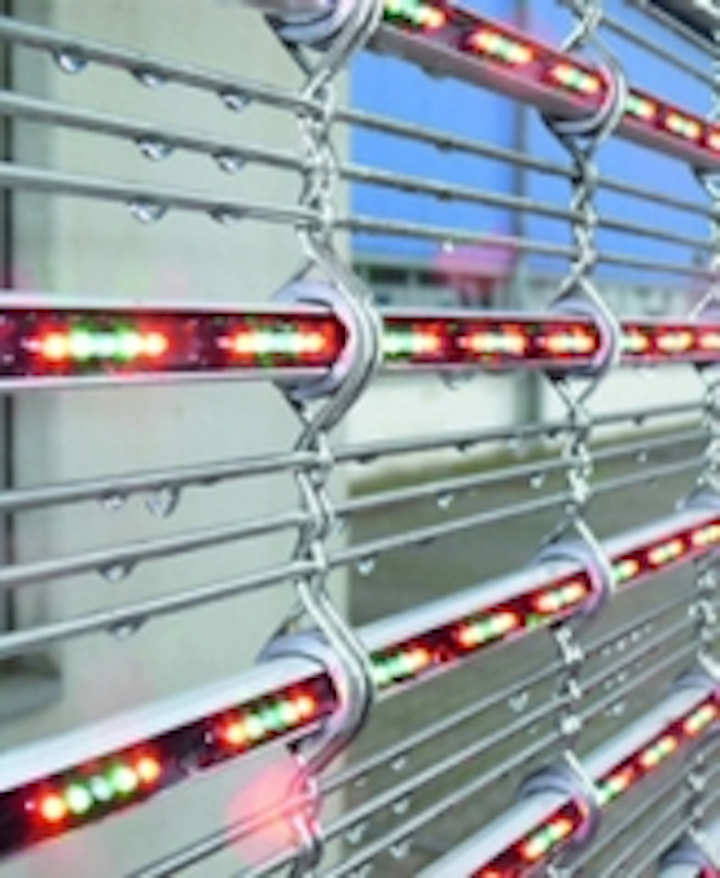 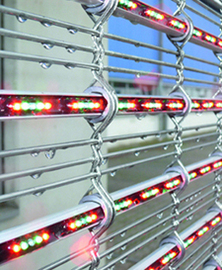 The world's leading technical weavers GKD – Gebr. Kufferath AG
managed to underline their success once again in 2006. After 1994, it
once again secured the renowned Steel Innovation Award for its
architectural and design meshes. This time the system for
medialisation of architecture in the category “Steel Design” took the
place on the winner's podium. The creative combination of electronics
and stainless steel and the “spectacularly increased range of
application of metal mesh in façade and surface architecture”
convinced the jury. Today, five years afterwards, Mediamesh® has
become a highly-demanded system for architecturally integrated
medialisation of façades worldwide. Eleven media façades in seven
countries and three continents cast their spell on people all over the
world. Whether in Milan, New York or Tripoli: Mediamesh® is a
convincing trend-setting digital signage concept and intelligent
façade medialisation system.

Flexibility and motion, mirroring and projection, transparency and reflection mark the sensual qualities of the metal mesh type Tigris even in its "raw state“. The Mediamesh® system is based on stainless steel cable mesh, equipped with individually controllable LED. The profiles are linear-wired and connected to a central server in the object via control units.

Mediamesh® combines this technical design with extraordinary robustness and resistance, even under extreme climatic conditions. No need for maintenance and low energy consumption – it requires only about one sixth of the power of conventional displays - confirm the overall efficiency of the system. However, its special highlight is its transparency which - contrary to conventional billboards - allows the unrestricted use of rooms located behind it. Even though it provides functional privacy and sun protection at the same time, Mediamesh® is the only system of its kind that allows unobstructed view from inside the building.

New perspectives
The international success story of Mediamesh® is based on the unique
efficiency and range of medialisation of buildings by day or by night. In addition to individually developed media displays, the mesh system serves as a medial platform for events, conferences, advertisement messages, films or even live feed tweets – round the clock. The higher the density of the selected project-related pixel resolution, the finer the image resolution of the media façade and the closer the possible viewing distance. The individual configuration of Mediamesh® depends on planned application
and image quality. Any desired format (16:9, 4:3, etc.) is possible. The system's special fascination stems from the unrestricted size of the playable surface, providing each electronic image with adequate presence. The combination of both spectacular and profitable uses as digital signage presents unimaginable prospects to planners and operators of large, prestigious construction projects at heavily frequented areas.

Without limits
The spectrum of building types already featuring Mediamesh® façades is
similar to a workbook of a global architectural network. University, sports arena, convention center or hotel: If it can be designed, the sky is the limit for creativity. As pilot project, Mediamesh® has stood the test in form of a spectacular scaffold cladding. During the general renovation of the Milanese City Hall - on the famous Piazza del Duomo, directly beside the cathedral of Milan - Mediamesh® revealed its multifunctional potential as privacy protection, fall protection and medial ambassador for the first time.
Thus, the busy square featured a temporary 21st century screen during the construction period, communicating with visitors across from the famous gothic cathedral. As semi-transparent cladding, Mediamesh® provided an unobstructed view of the adjacent buildings while simultaneously broadcasting live from such places as the Scala in Milan, the Giuseppe- Meazza stadium or even from Rome during the recital of the Angelus by Pope Benedict XVI.

Eloquent ambassador
In 2009, the first media façade made of Mediamesh® on the North-
American continent was created in Fresno, California, for the new Henry Madden Library building at California State University. Here Mediamesh® shows the film of an American woman weaving a basket - as reference to the traditional crafts of Native Americans - on the building façade. The Mediamesh® on the front of the Tripoli International Convention Center finished in February 2010, serves more as means of communication than cladding. 350 m2 Mediamesh® set visual accents beside the main entrance of the Convention Center in Libya. The media façade, which has been integrated into the bronze-coloured mesh membrane of the building in front of the glass cladding, allows an unobstructed view. Thus it turns into a
mediator between the indoors and the outdoors through appearance and
content.

Athletic signal
The first large-scale Mediamesh® façade on a sports arena was installed at the American Airlines Arena in Miami in 2009. With a size of almost 320 m2, the new digital outdoor advertising space earned the arena the attribute of Times Square South. The exposed function of the American Airlines Arena as the innovative, dynamic center of Miami is emphasised by the luminous media façade, sending effective advertising signals. The installation of the
Mediamesh® along the curved glass front of the arena presented a
particular challenge. Despite the curved architecture, the flexible,
adaptable system ensures absolutely distortion-free optics. As a
promotional platform on the American Airlines Arena in the US, Miami
Media Mesh – in short: Triple M – created a sensation not only with the operators of basketball stadiums.

Promising traffic architecture
During the course of this year, two additional large-scale projects in the US and the Emirate of Qatar will further prove the success of Mediamesh®. On a daily basis, more than 200,000 people pass by the New York Port Authority Bus Terminal, making it an ideal location for advertising. At the end of June, this enormous contact potential will be taken into account with a 552 m² media façade. Thus, New York gains another superlative and the Port Authority Bus Terminal is a far-reaching luminous benchmark for the adjacent Times Square. The so far largest Mediamesh® façade, scheduled for completion at the end of the year, is located in the new airport building in Qatar: As the largest single order in the history of the business unit
CreativeWEAVE, GKD – Gebr. Kufferath AG is installing the world's largest Mediamesh® in the New Doha International Airport. Spread over five strategic areas, a 1,100 m2 media façade is created in the main terminal.

Successful innovation driver
Ingo Kufferath, Chairman of GKD – Gebr. Kufferath AG, is convinced that the success of Mediamesh® will continue and considers it a confirmation of the company's inventive spirit: "What is unique about GKD is our innovative strength and culture. To us, technological leadership not only means to provide our customers with the best possible product, but also to continuously search for new things, to be the driver for technical innovations.“ His brother Dr. Stephan Kufferath, Chairman of GKD – Gebr. Kufferath AG, agrees and adds: "Mediamesh® is a successful example for this future-oriented strategy. The global projects are a proof that lateral thinking and openness for cross-disciplinary cooperation - as in this case in
the area of medialisation – are worthwhile.“

GKD – Gebr. Kufferath AG
With two divisions - WORLD WIDE WEAVE for technical meshes and
CAPITAL EQUIPMENT for capital equipment and engineering - the ownermanaged
technical weaver GKD – Gebr. Kufferath AG is the world market
leader for metal and plastic woven solutions. The division WORLD WIDE
WEAVE comprises the business units SOLID WEAVE for filtration and
separation media, WEAVE IN MOTION for process belt technology and
CREATIVE WEAVE for metallic fabrics for the architecture and design
sector. The division CAPITAL EQUIPMENT, with its unit GKDCompactFiltration, sets international standards in capital engineering for clearly defined markets in the solid/liquid filtration sector. With six production facilities – the headquarters in Germany, the others in the USA, Great Britain, Spain, South Africa and China - as well as branches in Dubai and Qatar and agents around the world, GKD is always close to the market and its customers.