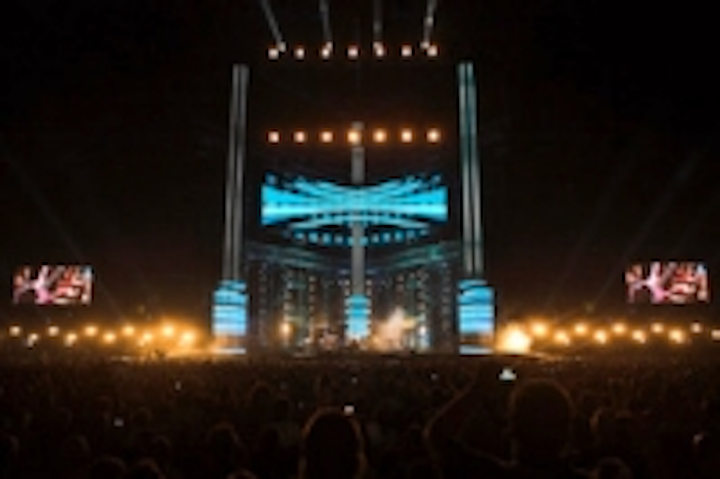 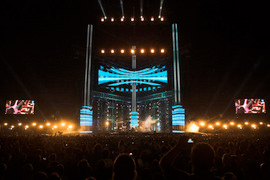 Pinna has been working with the artist - a prolific singer/songwriter, often controversial and the most popular live performer in Italy, considered a God by his fans - for the last 20 years, each time coming up with a new, fresh and completely different look and feel to the stage and setting.

This time his elegant, hugely dynamic 37 metre high, 3-level, portrait format architectural set structure was based around the concept of 'verticality' designed by GioForma Set design studio. It included large quantities of scenic LED panels, some of which were moved on a Cyberhoist system and a large lighting rig, of which an integral element was the 24 x Robe ROBIN LEDWash 600s.

These were rigged specifically on two staircases at stage level (level 1 of the 3 mentioned above) - one each side of the stage - which were ensconced between four 9 metre high side-stage lighting pods. The LEDWashes were focussed on the band and washing the stage area immediately around them.

Pinna expands, "I wanted a lightsource that was extremely bright and powerful to give a seriously punchy 'bump' effect for my accents and punctuations to the music". Rossi's show is a full on rock 'n' roll spectacle, so plenty of that goes on!

It is the first time he has used Robe's new LEDWash 600, although he has used other Robe fixtures frequently since 2005 on a variety of shows and tours including Antonello Venditti, (with the Robe's supplied by RMS) and Eros Ramazzotti.

The LEDWashes were first demonstrated by Marco Bartolini from Robe's Italian distributor Robe Multimedia, and immediately convinced Pinna that he had found exactly the right fixture for the desired effect.

The LEDWash 600s were worked hard throughout the two and a half hour Vassi show and utilised constantly for general illumination as well as the 'power-bumps' that Pinna so specially wanted.

"I love the zoom" he says referring to the unit's very versatile 15 - 60 degree range, adding that he also likes the richness and purity of the colours, the flat and even consistency of the beam and the colour mixing - which is completely homogenised and super-smooth.

Pinna is interested in integrating LED technology into light-shows for numerous reasons and has tried out many different types of fixtures, saying "These LEDWash 600s are amazing - very bright - and quite unique. In fact, I have never had quite such an impressive LED fixture on tour before".

Pinna is so impressed by the brightness and the light weight and portability of the LEDWashes, that he is considering replacing some of the other fixtures on the rig with more Robes for the next leg of the tour in August.

He controlled the LEDWashes and all the rest of the lighting - including other moving lights, Jarags, blinders, strobes, LED PARS and conventional PARs - from a grandMA full size console, working closely with Marco Denardi, who ran the video media servers via another grandMA full size. They spent 6 intense nights of programming the show in Ancona Stadium ahead of the first gig there.

The tour's main lighting contractor was Limelite srl from Rome, with the LEDWash 600s supplied by rental and dry hire specialist, PR Electronic, also based in Rome, which has one of the largest stocks of all the latest Robe technology in the country.