Giant LED media facade system in the Hague, The Netherlands 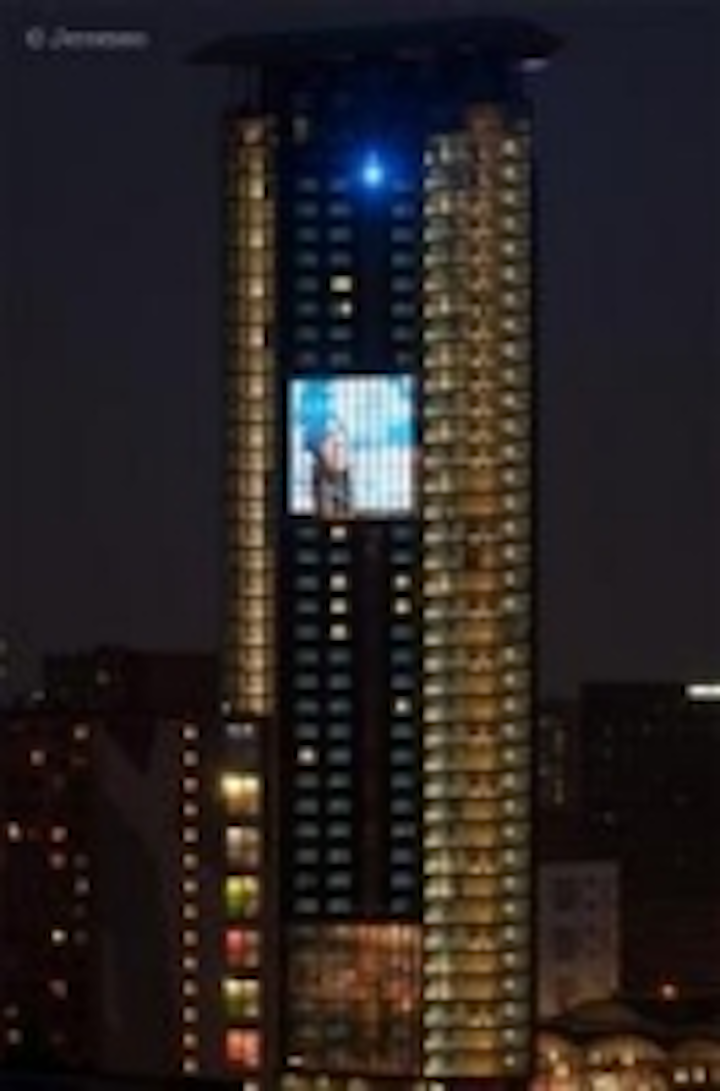 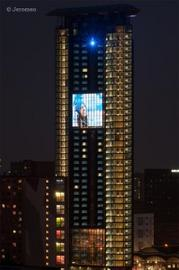 On the 1st September 2011, a giant LED Media Façade display was launched in the Dutch city of The Hague. The display measures more than 19m wide x 14m high, and is situated approximately 80m above ground, in the façade of the “Strijkijzer” building. Designed and manufactured by Media Façade specialists VML-Technologies BV, the display, which can be viewed up to 2km away, is used as a community information board, featuring a mix of local news, information, events and advertising, plus it is planned to give the local people the opportunity to interact with the display via social networking sites for such things as birthday greetings, including pictures and videos of the lucky person.

The installation consists of 1,716 LatticeTM S-14054L LED strips which cover an area of 11 windows wide and 6 windows high The display is technically unique in a number of ways. VML-Technologies designed and manufactured custom LED strips which seamlessly integrate into the façade of the building, with no visible cables or equipment anywhere on the display. Even though the system is 70% transparent, so that the occupants of the building can still see outside, by day the display packs a powerful 6,000nits of brightness, ensuring a vivid image even on the brightest days. When turned to black overnight, it becomes virtually invisible. Using the VML LatticeTM "PictureBox Controller", the LED strips are controlled in such a way that the whole picture is ‘pasted’ across the grid of window frames and remains perfectly visible.

VML-Technologies worked closely with the owners of the building, the renowned Dutch housing trust Vestia, and also with the original architects of the building, AAArchitecten, in order to create a display which is not only functional, but also architecturally attractive. An example of this can be seen behind the display, where the power supply units are mounted on completely silent “power trees” rather than being hidden away as is usually the case. VML-Technologies were also able to create a display of remarkable clarity and detail, despite using only a relatively limited number of horizontal lines, by developing special image processing software specifically for this type of display. The display is also very low power.

VML-Technologies were selected as the preferred supplier of the LED Media Facade system, following a very careful 2 year selection process carried out by Ceres, the Vestia Projects office responsible for evaluating and choosing a suitable supplier for this important project. Vestia and Ceres wanted a solution which would integrate seamlessly with the iconic glass and steel structure of the building façade, which spans over the interior of 6 floors from level 26 to level 31. "VML-Technologies was the only company which could clearly demonstrate that they had the necessary skills and expertise required to execute this complex and highly customised solution. We are very happy with the level of cooperation we received from VML, and we are extremely proud of the end result" said Aad Bouwhuis, Director, Housing Association Vestia Den Haag Zuid-Oost.

The overall result is a spectacular and beautiful display on the outside, and a carefully finished and aesthetically pleasing appearance inside the building.