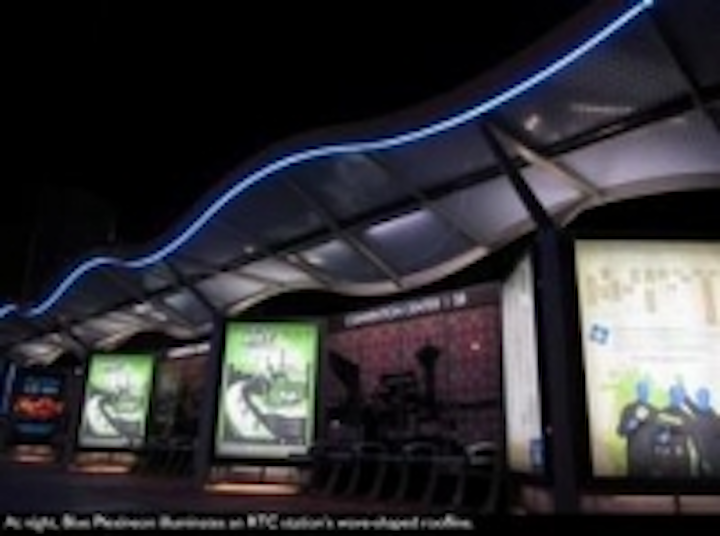 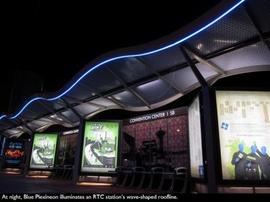 In the Las Vegas metropolitan area, every aspect of a new rapid transit system has been designed to entice riders and challenge common preconceptions about public transportation.

One example is the series of transit stations along the first route completed: the Strip & Downtown Express, running from downtown Las Vegas through the Vegas Strip. Featuring distinctive wave-shaped rooflines edged with iLight’s Plexineon Blue Series fixtures, the 15 stations help riders recognize the route and brand the system as modern and appealing.

“We wanted the stations to complement the transit experience,” says David Swallow, project manager at the Regional Transportation Commission (RTC) of Southern Nevada, the local transit authority and transportation-planning agency.

Also like light rail, the system’s stations provide level-platform boarding. For their design, function was important and so was visual appeal, says Windom Kimsey, principal and head of design at Tate Snyder Kimsey, project architect.

Conferring with engineering firm WSP Flack + Kurtz at the design stage, the team at Tate Snyder Kimsey decided to illuminate the wave-shaped roofline at night. The goal was to convey a sense of movement and create a memorable impression for riders navigating the system. The roof’s curved edge, however, presented a challenge.

“We needed something that would fit in a very tight space and could bend,” Kimsey says.

For a thin, flexible strip of light, Jay Wratten, senior lighting designer at WSP Flack + Kurtz, recommended Blue Plexineon, knowing the product also is resistant to vandalism and has a track record of successful installations in hot climates.

“All those factors combined to make it the compelling choice,” Wratten says.

More than a year after installation, Kimsey is very pleased with the product: “Both functionally and aesthetically, the Plexineon looks great.”

The RTC also is delighted with the effect. “It gives the transit station that extra finished touch,” Swallow says. “It has a punch to it.”

The award-winning design since has been replicated across the RTC system. Comfortable, safe and eye-catching, the stations improve the public transit experience and encourage use—promoting sustainability, air quality improvement, enhanced mobility and quality of life in one of the fastest growing regions in the country.