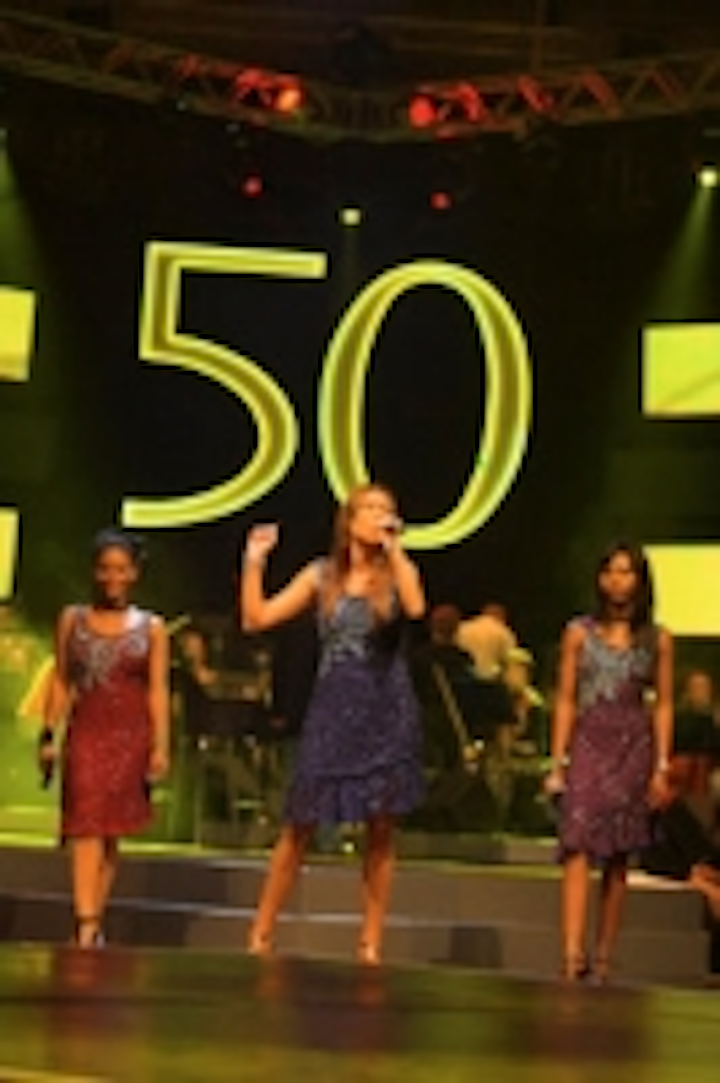 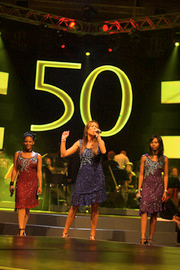 Toyota South Africa celebrated its 50th anniversary with a gala dinner event staged in Hall 5 of the Gallagher Convention Centre, Midrand, Johannesburg, South Africa. The centrepiece of the evening for 700 invited guests - including Toyota management, staff and associates, VIPs, politicians and dignitaries - was an up-tempo live entertainment spectacle with a cast of over 140.

Robe moving lights played their part in the slickly choreographed musical chronology that accompanied a presentation of Toyota SA's achievements since 1961, when the late Dr Albert Wessels imported the first Toyopet Stout pick up trucks (popularly known as 'bakkies' in SA) into the country.

The show's creative director and designer was Laurence Sale from Inhouse Productions, who asked Johannesburg based corporate lighting specialists DNG to provide the full technical production - lighting, sound, video and staging. Sale and DNG have worked together on many previous projects.

The set covered an area 30 metres wide by 35 deep and formed an epic looking diamond, complete with multiple stepped rhombus shaped risers. The main overhead trussing was configured as four box trusses flown in diamond orientation to match the definition of the set.

The orchestra was right in the centre, and the two outside walls of the space were supported by a 6-legged ground support system at the back, and clad with two levels of 16 mm pitch LED panels. There was a large edge-lit '50' sign at the rear apex of the stage.

In addition to the new Robe ROBIN fixtures, Dickinson also used 14 of DNG's ColorSpot 575E ATs. These were originally purchased 4 years ago and have been constantly in service ever since, and proved extremely reliable and very versatile workhorses.

With that positive experience in mind, when Robe launched the ROBIN Series, DNG needed new stock to service its continually busy schedule and wanted the latest technology. Robe's South African distributor, DWR arranged a series of demonstrations, after which they made their purchase.

"The LEDWash 600 is a totally brilliant unit," enthuses Dickinson, "It gives beautiful even coverage, a clean light path and absolutely no shadows". For the Toyota show, he programmed the LEDWashes in Mode 2 as a standard wash light, being too pushed for time to take advantage of all the effects using the LED rings.

They were used for all the stage and set washing, for covering the orchestra and the performers, who at times were spread out across the entire length and breadth of the set. The LEDWashes allowed him to do this with ease and finesse.

The low ceiling height was another parameter to consider. This is where the light weight of the LEDWashes and the ROBIN 600 and 300s really helped, in that they could use 40 mm mini-beam trussing instead of heavier duty, which looked far neater, tidier and was altogether less obtrusive on the sight lines.

Apart from the LEDWash 600s, the other Robe fixtures on the rig were all used for beam work, specials and effects. With the large set and an all-action show there was a lot of reliance on lighting for movement, colour and pizzazz, and it was an essential element of the visual aesthetic, together with the video for which ambient content fed to the LED panels was specially created by Laurence Sale.

Dickinson is generally delighted with the ROBINs having now used them on several shows. They have always been "completely stable, reliable, flexible and just generally excellent tools for any situation" he states, adding that the service and support from DWR is "Incredible - fast, efficient, knowledgeable and above all, friendly" ... and all part of the bigger picture when investing in a brand.