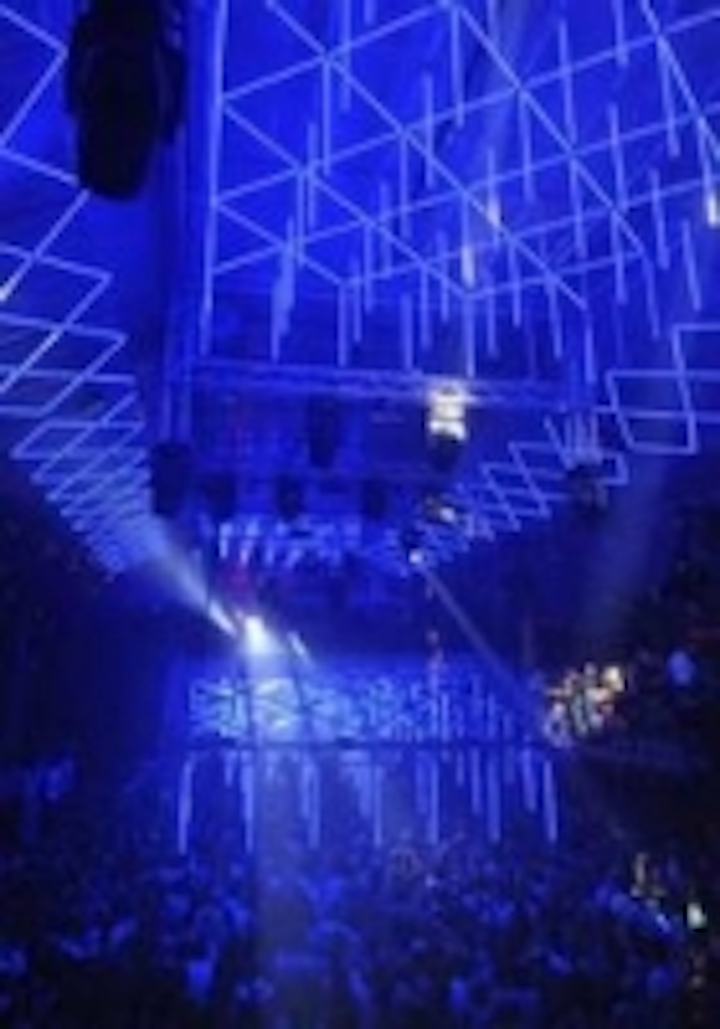 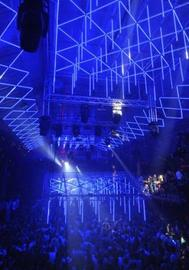 (IDMA/Winter Music Conference) including 2011 and ranked #4 on DJ Magazine's Top 100 clubs in 2011, Amnesia is well known around the globe. The famous Ibiza venue now owns the biggest kinetic 3D LED installation in Europe with 76 DMX universes controlled by MADRIX.

8,848 RGB pixels are turning the night into day at Amnesia Ibiza thanks to Rebeca Sánchez, Miquel Clot and others. The striking setup was first to be seen at this year's opening, 11th of June.

The Opening Party 2011 was as diverse and colorful as the whole spectrum of Amnesia's club culture–it hosts Matinée, Cocoon, Cream Ibiza and others. The main concept of the lighting redesign is based on this special diversity.

The premise that something different happens every night was quickly established in the first meetings of designers, technicians, and decoration teams. That is why the whole design needed to be functional and spectacular at the same time.

LEDsCONTROL (MADRIX distributor for Spain) therefore planned a spacious, lightweight, and safe construction with large distances between fixtures. Hence, operators are able to adapt to the different, daily events with ease. Owing to the generous height of the club (11m), the installation is hidden from view if the LEDs are not lit up. But when the show starts, the impressive 2D/3D setup fascinates people within seconds.

The fixtures in use were specially customized for Amnesia by LEDsCONTROL. 354 LED tubes, the majority, have a length of 1m and contain 32 SMD RGB LEDs. 2 LEDs each are controlled as one pixel via DMX. The fixtures are attached in zig-zag shapes of 45° and form a tram of 'diamonds' that covers the entire ceiling (incl. horizontal platforms and inclined roof).

On top of that, 1m vertical fixtures are positioned below the horizontal platforms at every intersection of horizontal tubes. 4 LEDs each are controlled as one pixel via DMX to offer 360° view. The astounding 3D effect is delivered by 217 tubes in total.

Dozens of special effects were developed by LEDsCONTROL for this installation. These customized effects as well as custom-built and unique MADRIX Scripts, mostly used for 3D, provide the new club experience.
But the timing during operation is important. The combination of video walls, moving heads, LEDs and other lighting equipment requires the special attention of the lighting operator to create an atmospheric and vibrant light show.

A grandMA 2 console, which also controls MADRIX remotely via DMX-IN, and the MIDI controller AKAI APC-20 complete the state-of-the-art setup. More than 2km of cables were used, while the installation demands 10,000W of power.

LEDsCONTROL is a solid state lighting and control consultancy established in 2009 by Rebeca Sánchez. Miquel Clot joined the team in 2010. Advising the best possible solutions for LED technology and control projects, LEDsCONTROL develops and provides creative designs and the right content for installations around the world. The portfolio includes major projects, such as Dubai Airport T3, Gran Casino Lloret de Mar, and Amnesia Ibiza. Rebeca Sánchez started working in stage lighting control in Mexico in 2001. In 2005, she moved to Barcelona focusing on LEDs, stage designs, and architectural lighting. Miquel Clot joined the industry in 1990, working for different theater companies around the world and touring with various artists.

The MADRIX® brand brings professional LED lighting control solutions based on innovative software and hardware to the lighting market. MADRIX is a professional LED lighting controller. It is a powerful and intuitive Windows® software and at the same time centerpiece of the MADRIX range of products. MADRIX supports a lot of well-known industry standards, such as DMX512, Art-Net II, Streaming ACN, DVI, Eurolite T9, ColourSmart Link, and the Philips Color Kinetics and Insta/ROBE protocols. The application supports pixel mapping and is both an effect generator and media server with outstanding capabilities to display unique real-time effects and visuals.