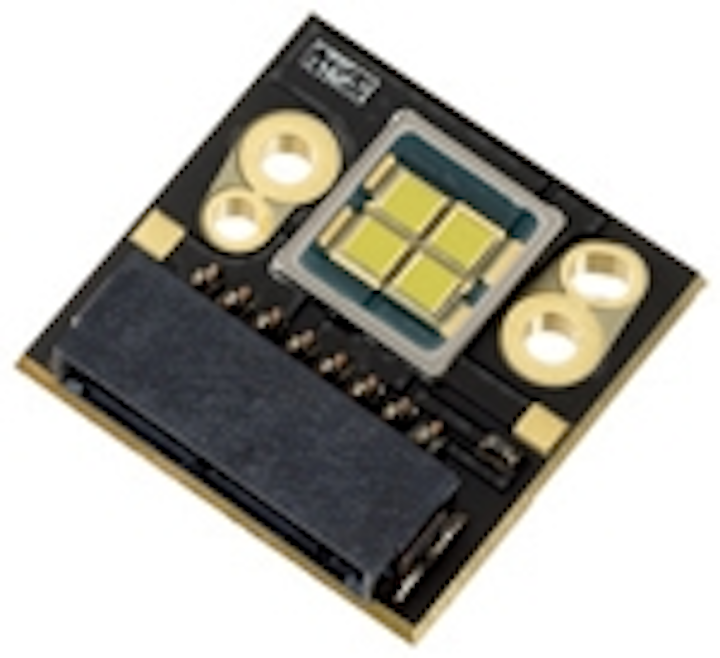 The CBM-360 delivers 4,000 lumens from the smallest total source area of any LED package in its class, the key factor to enabling a compact, high efficiency imaging optical system for a gobo spot. The Trackspot Bolt builds on its legacy as the industry standard for moving mirror fixtures with pure white light output from a single Luminus CBM-360. Even with such a powerful lumen output, the LED provides bright and even light over time using less power, and the fixtures dissipate less heat than the original models.

In a unique move, High End Systems is offering a trade-in program through the end of the year for lamp-based Trackspot fixtures. "Luminus' LED engine and the feature set in the Trackspot Bolt come together to offer small clubs and stages state-of-the-art lighting," says Brad Schiller, High End Systems Product Manager. "The original Trackspot was extremely popular and most are still in operation today. Our trade-in program helps customers move to modern LED technology and stunning new effects while providing operational savings, extra dependability and long-term service. The response has been incredible and customers are impressed with the quality and brightness of the Trackspot Bolt's output."

"We are excited to be adding High End Systems the growing list of industry pioneers using our products," says Don McDaniel, Ph.D, Director of Global Entertainment for Luminus. "A compact light engine built around our CBM-360 LED has allowed High End Systems to revive the Trackspot Bolt with more light and features while reducing power consumption at the same time; a perfect example of the innovation Luminus brings to the entertainment market with our Big Chip technology platform."