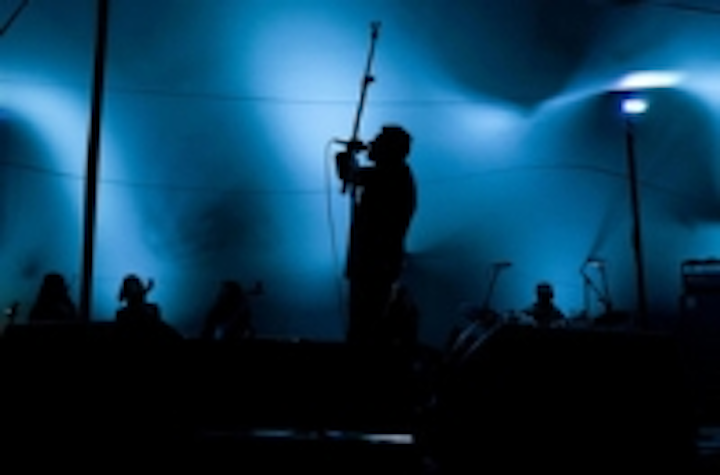 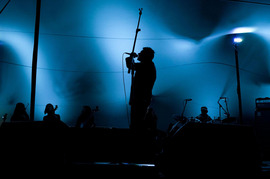 Rainbow Warrior III, a purpose-built motor-assisted sailing yacht recently left the German shipyard where she was built and made her maiden voyage across the English channel and up the River Thames in London for a special Greenpeace 40th anniversary celebration. At the helm for the last leg of the Thames voyage was Michael Eavis, founder of Glastonbury Festival and enthusiastic supporter of the high-profile campaigning organization.

Entec has been involved as a technical supplier to GBQ since the concept first evolved in 2006. They were working again with lighting designer Andy Keightley, the band's sound engineers Matt Butcher (FOH) and Dave Guerin (monitors) and their production manager Craig Duffy. The event was the first reformation of GBQ since 2008.

The Rainbow Warrior III first stopped at West India Dock in London's East End on her way in to the capital. Entec's Sound and Lighting HOD's Dick Hayes and Noreen O'Riordan conducted a site visit two days ahead of the event, which proved a valuable exercise as several things were changed afterwards.

Dick realised that the ship's crane was ideally positioned - as well as being the right piece of kit - from which to fly a hang of d&b J-8 line array speakers - rather than ground stacking Q-Series, which was the original idea. Noreen and Andrew meanwhile decided that in keeping with the whole spirit of environmental consciousness, they should provide the greenest possible rig - and so went completely LED in the specification.

With the final specification for sound and lighting decided, the equipment was then trucked from Northolt and loaded onboard, before Rainbow Warrior then sailed up river to a mid-river mooring opposite the Design Museum on the South Bank, just before Tower Bridge.

The band used the Rainbow Warrior III's helipad deck - at the stern of the vessel - as a stage, and the array of five d&b J-8s was flown off the crane conveniently positioned just in front of the stage area. In addition, two J-SUBs were stacked on the deck, and two E12s were used as fills for all the guests aboard the ship. The band used M4 monitors along with a pair of Q-Subs for the drummer.

The performance was mixed somewhat unorthodoxly via a Yamaha M7CL console by Guerin stationed on the Rainbow Warrior - with Matt Butcher standing on the river bank in the public viewing area - directing and tweaking the mix by radio communication!

Last minute adjustments had to be made to the height of the main PA array, which needed raising to account for the ebbing tide! Dick commented afterwards "Unfortunately tidal flow has not been allowed for in d&b’s Array Calc..... must have a word with those cunning chaps in Germany!!!!’

Andy Keightley has LD'd GBQ from the start, and has also worked with Entec on various projects over the years, commenting, "As always, they were fantastic - great service, equipment and people". Entec's Sudip Shrestha was the technician.

Keightley's lighting brief included some detailed and specific requests from bassist Paul Simonon in particular, regarding the overall scene-setting atmospherics, which needed to resemble the oscillations of gas lighting and flickering candles, moody shadows, silhouettes and hazy claustrophobia of historic London.

Apart from the genuine wish to be as green as possible - in keeping with the whole Rainbow Warrior III ethos - LED light sources also made sense for power saving, as there was just one single 16A supply available to power all the lighting. The bare-end tails from the Entec power distro were wired directly into one of the ship's buss-bars.

Being moored mid river, Andy also was keen to ensure the lighting came off the ship and lifted the space around it, so the amassed public could really get a sense of scale and spectacle. The late addition of a large stretched fabric gazebo style roof over the performance area entailed some last minute adjustments to the lighting plot/

All the equipment was on stands, scaffolding poles, tank-traps or floor mounted.

To create a huge, epic searchlight feel with lots of light and energy emanating from the yacht, Keightley used six i-Pix BB4s running along the back of the stage. Part of the rationale behind this was also to make the ship as visible as possible from afar!

For footlights and up-lighters on the floor at the front of stage, he utilised six i-Pix BB7s. Eight JTE PixelLine battens were attached to tank-and scaff devices as were six GLP Impression LED wash moving lights, positioned around the stage action. Eight i-Pix Satellite 'brick' lights were attached to the tent posts, highlighting the architecture and shape of the roof structure.
The control position was in a storage area adjacent to the helipad, and Keightley programmed and operated the show using an Avolites Pearl Expert console.

Says Entec's Noreen O'Riordan, "We were all extremely proud to be involved in this project. Apart from our history of working with Damon Albarn and Craig Duffy, it was an interesting challenge to work in such an unusual venue ... and great to help support Greenpeace".
Rainbow Warrior III is the first purpose-built (as opposed to converted) vessel operated by Greenpeace and will be active on environmental protests and scientific excursions. She replaces Rainbow Warrior II now retired to Bangladesh to serve as a hospital ship. The first Rainbow Warrior was notoriously sunk by French commandoes whilst in Auckland Harbour, New Zealand, in 1985!