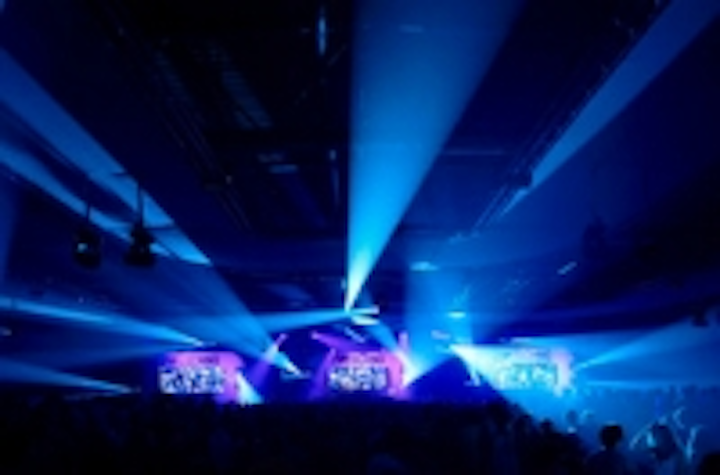 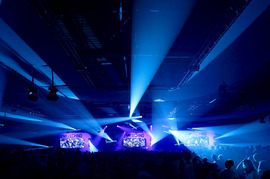 Over 100 Robe ROBIN 600E Spot and LEDWash moving lights were used to illuminate the Blue Room, one of five arenas at the 2011 I Love Techno (ILT) event – one of the biggest and most successful rave experiences in Europe - staged at the Flanders Expo, Ghent, Belgium, and attended by a completely sold out audience of 35,000 enthusiastic ravers.

The Robes were specified by the event’s lighting video and production designer Thomas Boets of LD Productions, and supplied by rental company L&L Stage Services from Herentals, Belgium.

Boets designed visuals for all areas across the whole event - in which he has been involved for over seven years.

Seventy-six Robe ROBIN 600 Spots and 26 ROBIN 600 LEDWashes were used in the Blue Room, rigged onto to a series of trusses over the stage/DJ booth and on two box trusses – one inside the other – with curved edges that were flown above the audience. These two trusses had white fabric stretched between them, providing an ideal projection canvas for the ROBIN 600 Spots.

The LEDWash 600s were used to produce rich, bold and very bright colour mixes and techno-tastic looks all around the room, which featured a hi-energy molten mix of sounds from a truly stellar line-up featuring Digitalism, Steve Aoki, Fake Blood, Cassius, Mumbai Science and others.

The lighting had to be dynamic and very flexible, offering enough options to keep going for 12 hours of non-stop partying and dancing to the very best of techno – and that’s a challenge for any lighting rig, and also for operator Tom van den Burg, who used a Chamsys MQ 100 console to cut his own magic visual mix.

The pace was intense and relentless and utilised all the features that the ROBIN 600 Spots and LEDWashes had to offer – colour and shutter chases, zoom and iris shaping were just a few of the effects explored throughout the evening to the delight of performers, fans and Boets himself, who was very pleased with the results.

Boets decided to use the Robe fixtures for the ILT Blue Arena after using ROBIN 300E Spots in the Ancienne Belgique in Brussels for the recent album launch for Belgian house/soul band, Sweet Coffee .

He comments, “I have seen the amount of Robe fixtures continually increasing in the Benelux region, and the new ROBIN Series units in particular tick so many boxes – they are small, super-bright, lightweight and very fast – all the attributes you need for the particular demands of dance event lighting” …. so, he decided to give them a good work out!

He also spec’d two Robe DigitalSpot 7000 DTs for Hall 5 to project onto a scenic version of the ‘I Love Techno 2011’ logo which is constructed from a series of interlinked triangles.

He was very impressed, and will “Definitely” be using Robe again. He thinks that the LEDWash series, with three models now available - the 300, 600 and 1200 versions - has massive potential in multiple sectors.

The LEDWash 600 has already been Robe’s most successful and best ever selling fixture since its launch a year ago.