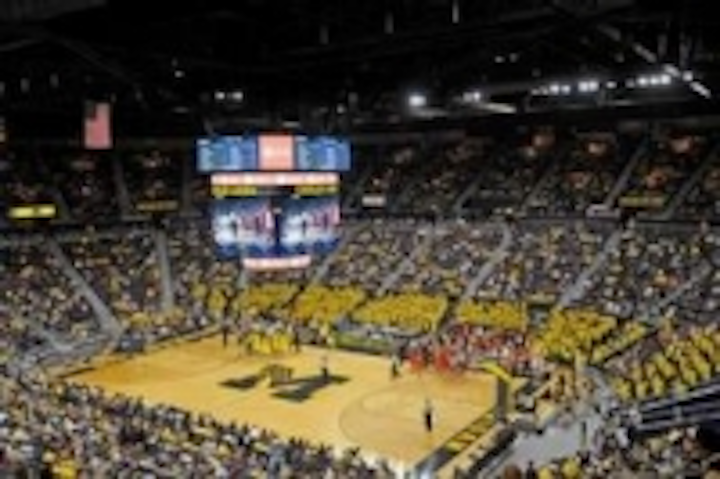 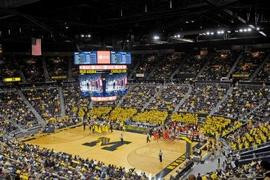 Crisler Arena, the home of Michigan basketball since 1967, is a tribute to Herbert O. “Fritz” Crisler, former Wolverine football coach and athletic director. Seating 12,800, Crisler Arena has hosted multiple NCAA championship tournaments and serves as a training and studying center for Michigan student-athletes.

Inside the arena, Crisler's support structure is decorated with Big Ten and NCAA championship and qualifying banners for gymnastics, basketball and other winning Wolverines sports teams. The pre-game presentation on the Lighthouse LED video screens prepares the crowd for the upcoming game. Michigan basketball sponsors rotate advertising and branding opportunities on the four-sided system, while highlights of recent seasons, Wolverines athletics promotions, entertainment features and general announcements keep the crowd's attention until tip-off.

Once the teams finish their warm-ups, the PA announcer announces the line-ups in a humorous, one-sided manner. The visiting team's names are little more than whispered, while the Wolverines are announced with the fervor of returning heroes. The crowd's cheers and the video board animations mirror the announcer's favoritism. Striking graphics and exciting custom programming keep the crowd ready for the fight to come. The moment the announcer finishes the starting line-ups, the Michigan band leads the crowd in "Hail to the Victors," the Michigan fight song. Fists pump into the air with every shout of, "Let's Go Blue!" while the band, cheerleaders mascot and dance team are featured heavily on the Lighthouse LED video screens.

At tip-off, the Crisler Arena production team delivers the game to the crowd via the center-hung LED video displays. The presentation enhances the action on the court, using instant replays, stats, in-game features, between-play music and videos, plus custom Michigan basketball and Michigan athletics vignettes. The excellent production and video quality provide a fan experience of a higher magnitude, with fan attention alternating between the court and the video screens. With the game, the band, the cheerleaders, the crowd and the video screens, Michigan home basketball games are now a complete sports experience.

Lighthouse LED video creates impact at Crisler Arena, and the system's versatility enables the University of Michigan to put on a show that rivals the quality of its nationally-recognized basketball teams.

For the Crisler Ice Arena installation, Lighthouse teamed with partner and LED video systems integrator TS Sports, along with market-leading LED innovator and developer Cree, based in Durham, NC. Cree brought their vast experience and exceptional LED technology to the high-profile University of Michigan project.

“Crisler Arena is a project we're particularly proud of,” says Ed Whitaker, Director of Sales for Lighthouse NASA. “As with Michigan Stadium and Yost Ice Arena, Lighthouse is excited to give Michigan fans at Crisler Arena their Wolverines like they've never seen them before."

Lighthouse Jumbovision is a leader in LED video technology that develops, manufactures, and markets LED video display solutions for multiple indoor & outdoor applications, media and entertainment events, and sports arenas across the globe. With numerous technological breakthroughs to its name, Lighthouse has established itself as a multi award-winning leader in the LED video industry that holds itself to the highest standards of quality.