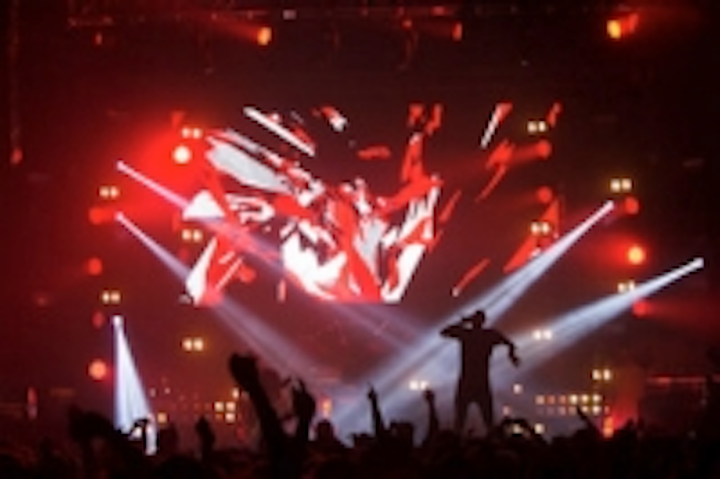 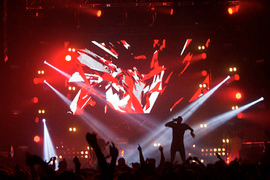 Carson has worked for Chase & Status for the last two years, clutching his seat as their career trajectory has gone supersonic. The band shares the same management team as Pendulum, another artist to whom HSL provides lighting.

However, this is the first time Carson has used HSL to supply both lighting and video – a process likely to happen increasing frequently following a recent major investment in Martin EC10 and EC20 LED screen product. "It makes things very straightforward dealing with one source for all these elements," confirms Carson.

The Chase & Status project was managed for HSL by the equally supersonic Mike Oates, who says, “We always enjoy working with Neil. He has great imagination and flare and the Chase & Status show is exciting, atmospheric and a great fusion of lighting and video”.

Carson designed the screen architecture - based on a central upstage block of EC10 in the middle, about 6 metres wide and 2.5 deep - flanked by three columns of EC20 at 5, 4 and 3 metres high respectively, which added real depth and three-dimensionality to the stage. The modular design allowed it to be easily - and practically - reduced to fit into smaller venues, whilst ensuring aesthetic continuity.

Different overall screen formats and shapes have been a consistent feature on all sections of Chase & Status’s recent touring schedules, keeping the visual evolution moving forward and the performance space always fresh and invigorating. Nothing stays still for too long on planet Chase & Status or in their hyperactive performances.

Their video content is created by The Light Surgeons. In addition to stunning animations and raw, edgy ambient sequences, on this leg of the tour it featured special footage of all the Chase & Status vocalists, who appeared onscreen for their songs - and sometimes onstage for real.

Playback was stored on an AI media server, triggered by timecode from the band at the start of the track. Carson could tweak parameters like the screen intensity from his Chamsys MagicQ 100 lighting desk to match the space and the variable daily configuration of the lighting rig.

The video - and its paramount importance - was also the starting point for Carson's lighting scheme.

He had to ensure that video remained visible at all times while he delivered enough lighting drama to keep pace with the maelstrom of sounds coming off the stage. The looks and scenes veered from fantastically large, boisterous and ravey looks to subtlety and classical theatre style mood. One of Carson's primary aims was to produce real dynamics, and a structure rather than just a flashorama! His careful punctuation of the show was combined seamlessly with the flow and feel of live operation and a bit of improvisation.

All the toured lighting was located on the floor, so it could function as a completely independent rig. However, when house moving lights were available - typically about 12 moving lights, a mix of washes and spots - these could also be hooked in to the touring system..

HSL supplied 24 Clay Paky Sharpies - also a new addition to their hire stock - which look spectacularly bright and tight! They were joined by 24 GLP Impression Zooms, which, like the Sharpies, were dotted all over the towers. They are among Carson's current favourite LED washes and were joined by 18 x 2-cell moles and 12 Atomic strobes.

On the deck were 6 Martin MAC 3K profiles, strung out along the back wall, used for powerful back lighting effects and highly effective silhouetting of the band. On boom stands upstage of the band were six i-Pix BB4 LED wash lights, six 2-cell Moles and six Atomic strobes,

In front of the keyboard stand were two custom 'C' and 'S' scenic letters, filled with a total of 110 Jarag-style lamps which are very NOW. Each was pixel-mapped via the lighting console. They consumed one and a half dimmer racks, but were well worth the effort.

Carson, explains "Mike was extremely helpful in sorting out the cabling and other peripherals needed to get these letters working once the metalwork was completed by Hangman"

He continues, "I really enjoy working with HSL. They are very friendly, efficient and super-professional, apart from which, Mike always goes the 'extra nine yards' to make something happen or help add value to the tour".

His crew were Marc Callaghan, Chris Roper and Dan Oswald, who all worked closely with media server operator, Gianni Fabricio.

Carson also highlighted the efficiency of having a crew working on the combined disciplines of lighting and video. The fastest de-rig time for all their screen elements - from being onstage to packed into the trunks ready to load into the truck - was an impressive 2 minutes and 54 seconds. This was achieved with plenty of co-operation from the local crew during the get out in Swindon!

The tour had two days production rehearsals at Brixton Academy before hitting the road HSL provided a WYSIWYG computer so Carson could visualise, patch and programme the extensive extras supplied for the Brixton gig itself, which also became a DVD shoot.. This saved stress on the day and allowed a head start in integrating the additional gear for that gig into their show.

The Brixton extras included five 24 ft trussing 'fingers' installed over the stage, populated with over 60 moving lights, 12 Atomics, i-Pix BB16s and Martin EC20, used to line the underside of each finger.