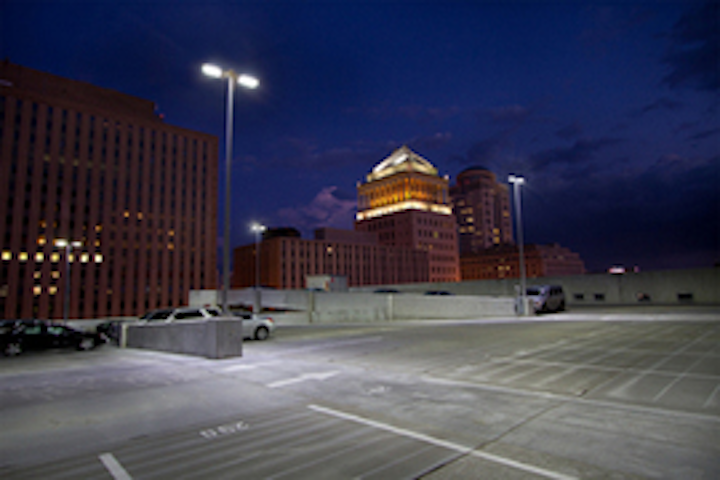 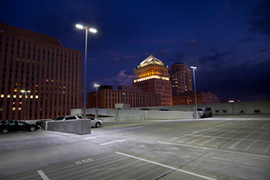 Downtown St. Louis is bustling with activity at Park Pacific. This project includes the renovation of the historical Missouri Pacific building plus a new seven-story structure to house office and retail space. One key to this sprawling 750,000 square foot redevelopment’s future success is a 7- story parking garage illuminated with LSI’s high performance LED lighting.

The parking structure was a contractor-driven design and build project. The original lighting plan was a traditional HID package; the perceived increase in initial cost of a LED lighting system precluded it from being considered initially. During a meeting, parties learned that the local utility had a new construction program that assists owners in offsetting the higher initial cost of a system that could lower energy usage.

With this information, a redesign using LSI’s XPG and XPG3 LED parking garage and XAM3 LED area light fixtures was evaluated. Funding amounts for the program are based on an energy reduction calculation – 10% below the baseline of 0.3 watts per square foot as defined in ASHRE 90.1 2001 or .27 watts/sq ft. The program provides some funding under a “Late Involvement Track” for redesign costs to incentivize owners to consider evolving technology after initial plans are finalized. New lighting layouts and energy calculations proved it was possible to achieve .07 watts per square foot utilizing LSI’s LED lighting.

By using the utility incentives, the owner was able to offset the initial higher cost of LED fixtures. Beyond the annual savings of over $14,000.00 in utility costs, substantial maintenance savings and greatly improved lighting quality were also achieved.