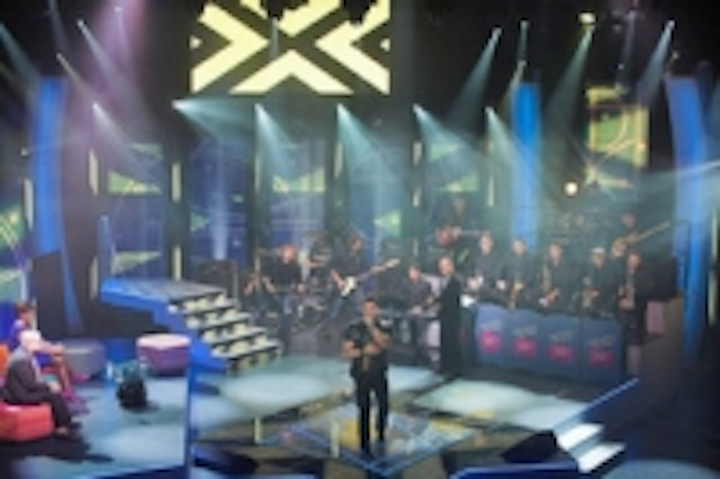 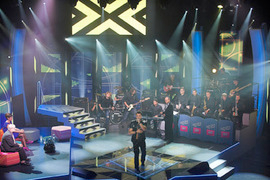 Two of the Czech and Slovak Republic's most talented visual creators - director of photography Philip Havelka and lighting designer Martin Kubanka are collaborating closely to produce a dynamic visuality for Barrendov TV's newest popular live music production, "To Je Nas Hit" (What is My Hit).

Robe moving lights are the main fixtures being utilized - including ROBIN 600 LEDWash units - which along with over 100 other new Robe fixtures are among the latest Robe investment by Bratislava, Slovakia based rental company Q-99, which is supplying all the show's lighting, scenic LED and video elements.

The show is broadcast live every Monday night from Studio 2 of the Barrandov Complex in Prague. This is one of the largest film studios in Europe and also one of the oldest and most famous, dating back to 1933.

Each of seven weekly contestants - all popular current Czech artists - chooses a classic Czech hit from between the start of the 1950s to the end of the 1990s and then reinterprets it, adding their own style, flair and treatment. The public then vote, and the top 'new' hit from each week goes forward to the final.

Havelka and Kubanka have worked previously on joint projects, but not for some time, so this was a great chance for them to again engage in a process that they really enjoy and is aesthetically rewarding, with both bringing plenty of energy and ideas to the table.

Barrandov Studio 2 is an intimate space, and every millimeter of it is used - filled with set, performers and audience.

The lighting is hung on a series of overhead trusses, and also mounted within set pieces and rigged on top of others, so every corner of the studio is covered with a lighting instrument. The performance space has an area of LED floor, with LED battens and panels around its edges and a small walkway and stairs for entrances and exits. The picture is completed with a live band set up on stage left.

Apart from ensuring that everyone is well lit for camera, the design and lighting has plenty of scope and flexibility to make each of the seven acts look different and interesting. Each has its own look and feel as well as array of effects, which are integral parts of the show.

The rig contains over 70 moving lights in total including 18 of Q-99's new ROBIN 600 LEDWashes, which are arranged in two rows (top and middle) along in the set at the back of stage, and also embedded into the stage right LED side set panels. These are used for general stage washing and lighting the band which are directly opposite on stage left, which works beautifully. “The LEDWash 600s are excellent and easily the best LEDWash light that I have ever seen and used to date," enthuses Havelka, who produced the initial lighting spec, which was handed to Kubanka who selected the appropriate fixtures.

Television makes up a large proportion of Kubanka and Q-99's high profile work, and with over 400 Robe fixtures already in rental stock, has been wanting to buy the LEDWashes for some time. This autumn, winning contracts to supply three major new shows including this one and, together with all their other regular work, it was the right time to spend some money!

Kubanka also loves the LEDWashes/ One of the many functions he appreciates is having individual control over all three LED rings, which means you can have one ring strobing and the others emitting constant light and other such effects which are particularly camera friendly.

Other Robe lighting on the "To Je Nas Hit" rig include 24 x ColorSpot 1200E ATs, eight ColorWash 1200E ATs, six ColorSpot 250E ATs and 18 x ColorSpot 575E ATs. These are hung all over the place, and used for anything from functional stage washes to lively, funky colour, gobo and movement effects.

There are three different areas of control. All the moving lights are operated by Pavel Jelinek using an Avolites Pearl Expert; white light fixtures by Ivos Viktora using a LightCommander and Marek Krasnan feeds content stored on a grandMA VPU media server to all the LED panels and battens.

"To Je Nas Hit" is directed by Roman Petrenko and produced by Zuzanna Horova for Barrandov TV.