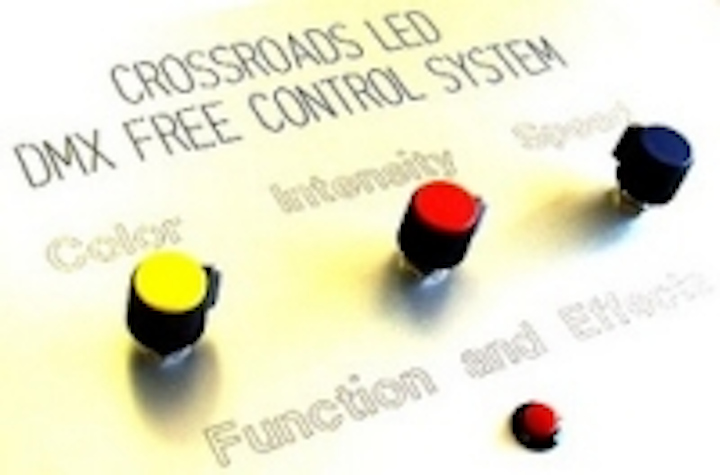 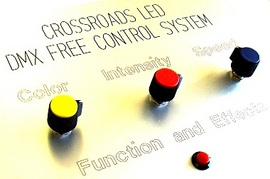 Collinsville, Oklahoma – Debuting this November at the International Association of Amusement Parks and Attractions (IAAPA) Expo in Orlando, Florida, the new DMX FREE™ control system was recognized as a major advance in LED lighting and control for the amusement and attractions industry and was awarded a Brass Ring Award by the Association. The award recognizes new products and technologies that are developed specifically for the industry.

The IAAPA Expo provided an excellent opportunity for Crossroads LED to demonstrate the revolutionary nature of the DMX FREE™ control system in a market that has had to rely on an inefficient technology. Currently, amusement parks and entertainment venues have had to use the DMX system originally created in 1986 and designed to control stage lighting. This control protocol is complicated and requires the cumbersome assignment of physical addresses for each LED segment. This has been a frustration in the amusement industry that has had to deal with sometimes 1000’s of feet of lighting at a time. In addition, the use of DMX and PWM technologies for LED control is encumbered by numerous patents held by several corporations, thus adding to the cost of this technology.

After observing that several lighting companies within the amusement industry were not finding products that solve their issues with the limitations associated with DMX lighting controls, Crossroads LED chose to take a completely different approach and develop a new system that would eliminate the frustrations found in current DMX-based systems. Demonstrated at the IAAPA Expo, this new “plug-and-play” system provides high-speed, advanced lighting effects and features without the need for physical addressing or PWM control. This DMX FREE™ controller utilizes a full authority, computer control interface – a first of its kind in the industry – and is designed to drive high-output, multi-watt RGB LEDs at efficiencies approaching 96%.

Also highlighted at the show was Crossroads LED’s premier LED array system which partners with their new DMX FREE™ controller: the INFINITY Series. This system employs industrial-rated, high-output, tri-color LEDs mounted to standard fiberglass circuit boards and interconnected into customer selected linear arrays. Utilizing Crossroads LED’s proprietary thermal management system and ultra-efficient high-output drivers, the INFINITY Series is able to drive the LEDs at full output without having to resort in the use of expensive metal clad circuit boards or heat sinks. The entire system runs at just a few degrees above ambient and is barely warm to the touch.

Additionally, the new DMX FREE™ technology has broad reaching applications beyond amusement lighting. Crossroads LED is also applying this technology to its line of multicolor and white interior and exterior commercial and architectural lighting products. The ability to control hundreds or even thousands of individual LED fixtures within a building with a simple and easy-to-use control interface has been long sought after. And with this new system, Crossroads LED has found a solution to this challenge as well.

For more information on Crossroads LED and its variety of LED lighting products, visit www.crossroadsled.com.