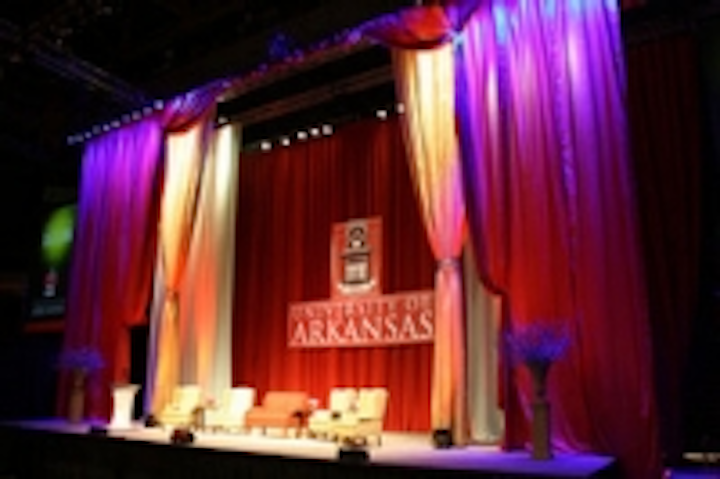 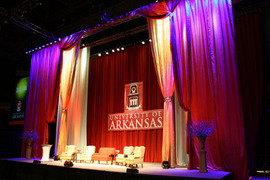 Robe ROBIN 600 LEDWashes were central to the lighting rig designed by Aaron Brown of TES Productions for a special visit by His Holiness the Dalai Lama to the University of Arkansas' Bud Walton Arena in Fayetteville, Arkansas, USA.

More than 10.000 people packed the venue to capacity for the high profile event, seizing the once-in-a-lifetime opportunity to experience and hear the Dalai Lama 'live'.

TES Productions is based in Tulsa, Oklahoma, and the University of Arkansas is one of their regular shows and event clients, for which they supply full technical production - including sound, lighting, AV and staging. TES recently invested in the purchase of new Robe ROBIN LEDWash 600s, eight of which were used on the Dalai Lama event.

Brown was asked to factor audience lighting into his design - as the arena only had basketball lights. Apart from that, he was left to his own creative devices to come up with a scheme that looked great on the stage and set (designed by Megan Stevens), in addition to ensuring that everyone in the arena had a clear view of all the action.

A set of special red and white drapes, custom made by Rose Brand, were a major part of the set look, and also provided a starting point for the lighting design. Brown wanted to accentuate their simple beauty and the dramatic impact they had on the space by highlighting and texturing, using a combination of conventional and LEDsources to change the colour of the fabric throughout the show.

"One great thing about the ROBIN LEDWash 600s is that you can dial in the exact colour temperature you want," he explains. This enabled him to blend LED and conventional lightsources completely harmoniously, so it was undetectable that two radically different types of lightsource were being used.

All of the LEDWashes were places on the deck up-lighting the different sections of drapes.

On the downstage truss, four Robe ColorSpot 1200E ATs were used with breakup gobos for the pre-show set look, together with Source Four PARnels for front light and two Lekos for podium specials. On the proscenium truss LED PARs down-lit the draping, together with two Robe CitySkape 48s. The four leg drapes were down-lit with narrow lensed Source Four PARs - and these were the same elements being up-lit by the LEDWashes.

Brown programmed and controlled all lighting on an ETC Ion desk, and was "Delighted" with the results produced by the LEDWashes.

TES Productions chose LEDWashes for their very low power consumption and because they would be ideal for illuminating sets with their highly tuned colour temperature control, and also, reliability was a key factor.

Says Brown, "I also like the quick movement and the near-silent operation of the units as well as the incredible zoom!" He adds that the touch-display panel is also very user friendly.

They already knew that Robe products are reliable and well engineered as their ColorSpot 1200E ATs purchased 4 years ago have needed virtually no maintenance over the time. "They have been great fixtures," he elucidates, which is why they stuck with Robe and bought the LEDWash 600s. Apart from that, Robe Lighting Inc "Has really excellent customer support - they are always quick to respond - and nothing is ever too much trouble".

Brown says he will happily "Recommend LEDWash 600s to anyone for set and concert lighting, and for producing very smooth, even front light with the fabulous colour temperature control".

The Dalai Lama show was produced by Scott Turner. Video was directed by Jamie Wright and engineered by Kevin Frankenburger and the event was stage managed by Don Worley.