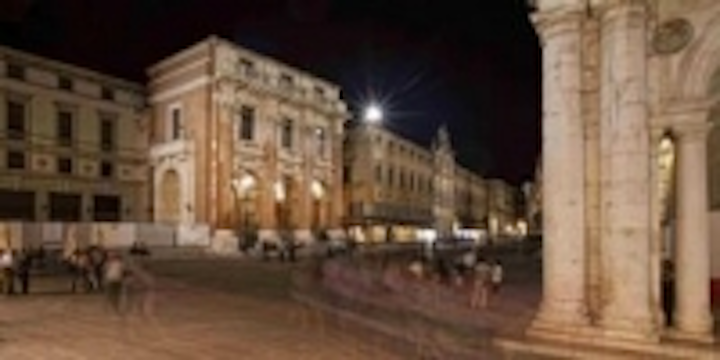 Arcugnano, Vicenza, Italy - At 9 pm on September 18 the magnificent setting of the Piazza dei Signori, Vicenza's pulsing heart, will be bathed in a beautiful white light that will enhance the jewels of Palladian architecture, the Basilica and the Loggia del Capitaniato, as well as the Torre Bissara, the Monte di Pietà palace and the adjacent squares.

Elegant lighting designed to illuminate the square and the surrounding buildings, but also to amplify their distinctive charm and beauty. A sober and environmentally-friendly light which illuminates history but also has an eye for innovation and energy saving. These are the distinguishing features of Gemmo’s work and gift to its home town, where the company has been based for more than 90 years.

“We wanted to bring light into the heart of the town, where centuries of history are reflected in the beauty of age-old lines, forms and spaces. We hope this initiative will restore the splendour of Piazza dei Signori as a vibrant centre of public life, a space for friends to meet and spend time, and a place which conveys to visitors and tourists the identity of Vicenza, a town steeped in a love of beauty and things well made,” said Irene Gemmo, President and Managing Director of Gemmo Spa.

“This is a fine example of entrepreneurial excellence set alongside our outstanding architectural heritage, soon to be returned to the public in contemporary garb,” commented the Mayor of Vicenza, Achille Variati. “I wish to thank Gemmo for this wonderfully intelligent act of patronage which gives us a stunning setting that few squares in Europe can rival. This lighting project will help turn Vicenza into a prominent European cultural centre under the banner of innovation and creativity.”

The project, which has the twin aim of making the area safer and more available to the general public while highlighting the architectural value of the monumental historical façades of the Piazza dei Signori, adopts a discreet and non-invasive lighting technology that works by reflection without dazzling the surrounding areas.

The system envisages floodlights positioned on the roofs of the buildings around the Basilica, with most beams directed from top to bottom so as to minimize light pollution and reduce night time intensity. Meanwhile the green of the Basilica's copper dome, visible from the surrounding hills, will be picked off by a cooler light.

At 9 p.m. on Sunday September 18 the illumination of Piazza dei Signori and the adjacent squares will be accompanied by a free open-air concert of famous pieces by Ennio Morricone performed by the Orchestra Roma Sinfonietta, conducted by the maestro himself, the soprano Susanna Rigacci and the Nuovo Coro Lirico Sinfonico Romano of Tor Vergata University of Rome.