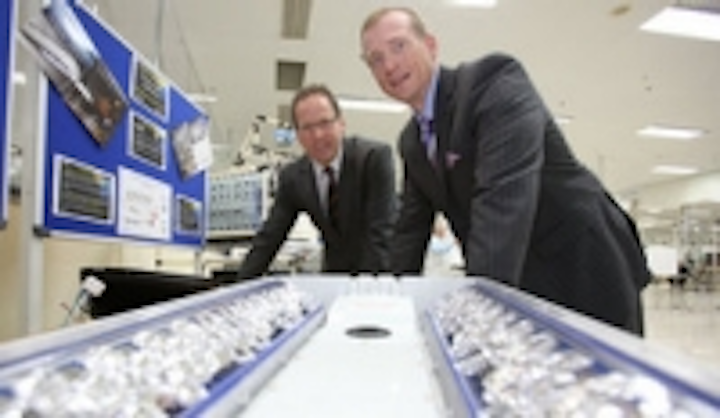 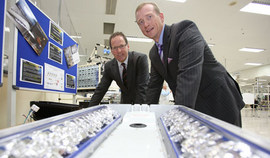 LED Roadway Lighting Ltd has selected Sony's Pencoed facility as its manufacturing line for an order of 2000 fittings, to begin production in October.

The Nova Scotia-based company is working with a UK infrastructure consultant, Capita Symonds, to develop a street lighting conversion program in the UK. The initial order of 2000 fittings is the beginning of the project, which will lead to a complete relighting of the City of Salford over the next two years. The city will eventually require a total of 27,000 fittings.

As a result of this project, 30 to 50 jobs will be created at the Sony manufacturing facility in Pencoed. There is potential for more significant growth down the road, as well.

LED Roadway Lighting's most recent project included an LED street light installation in Easthampton, MA. The company, however, is targeting the UK, which it sees as a massive potential market.

Sony UK has been working with LRL teams from Canada to set up a manufacturing line and has received an initial order for 2000 fittings with production starting in early October.

LRL is working with UK infrastructure consultant, Capita Symonds to develop an LED streetlighting conversion program in the UK, LRL won the tender to partner with Capita Symonds. The intial order is 2000 fittings through an Invest to Save program. This project will lead to a complete relighting of the City of Salford over the next 2 years requiring a total of 27,000 fittings.

It is anticipated that in the order of 30 to 50 jobs will be created at the Sony facility in Pencoed with further potential for significant growth when this technology is rolled out to other councils throughout the UK.

LRL's products, which can be retrofitted, are free of lead and mercury, provide energy savings of 50-80% compared to conventional road lighting systems while also providing significantly reduced maintenance costs.

Using high performance LEDs (light emitting diodes), the company has developed a range of low carbon, energy efficient and environmentally friendly lighting systems. The systems are used by more than 270 clients in 22 countries worldwide – from the Caribbean to the Canadian arctic.

The company is now targeting the UK and Europe, which it sees as a massive potential market. The UK alone has six million street and road lighting units, 130,000 of which are on the highways and the highest energy users.

Steve Dalton OBE, Managing Director of Sony UK Technology Centre, said he was delighted they had been selected as LRL’s manufacturing partner. He described it as great news and a significant win for Wales and for Sony team at Pencoed.

“We are always keen to expand our capability and third party manufacturing offers a great opportunity to diversify into new markets and new technology. We are delighted to be working with LRL, which has a great product and great potential.

“As they make inroads into the UK market it presents new job creating opportunities and also supports our work in the low carbon and renewable energy sectors.”

Edwina Hart, Minister for Business, Enterprise, Technology and Science, who visited Sony earlier this year, welcomed the news.
“The Welsh Government has worked with LRL to encourage the company to consider Wales as its UK and European manufacturing base and I am delighted they have formed this partnership with Sony which is one of our strategically important anchor companies.

“The technology has the potential to create cost savings while helping reduce carbon emissions and also open up new green job opportunities.”

Darren Zwicker, Executive Vice President of LRL said they had looked at a number of potential manufacturing partners but selected Sony for its expertise.

“It is a centre of excellence and surpassed every other manufacturer in terms of quality which is an area that we cannot afford to compromise on. Its location on the M4 corridor is perfect and it also has a fantastic distribution network.”

He added there was significant interest in their lighting systems from local authorities around the UK and a number of contracts in the pipeline.
LRL has established
a sales base in Swansea and been running a series of trials around the UK, including several sites in Wales.