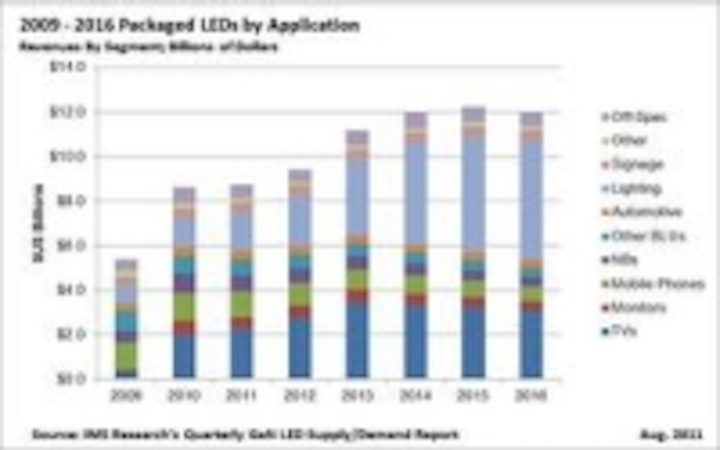 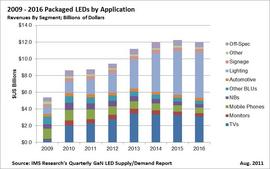 A new report from IMS Research shows that the gallium nitride (GaN) LED market is expected to rise only 1% in 2011, to $8.7B. This represents a significant slowdown in growth in a market that grew 60% in 2010.

Several factors have contributed to this decline in growth. The backlighting market, which represents over 60% of GaN LED revenue, has not grown as quickly as expected, the supply is growing twice as fast as demand, and costs are not falling, despite the over-supply.

Austin, Texas – After 60% growth in 2010, the gallium nitride (GaN) LED market is expected to pause in 2011, rising just 1% to $8.7B as shown in the figure below and reported in IMS Research’s latest Quarterly GaN LED Supply/Demand Report which tracks and forecasts the LED market quarterly. The slowdown can be attributed to:

• Slower than expected growth in backlighting which accounts for over 60% of GaN LED revenues. Backlighting is now expected to fall 3% in 2011 to $5.4B, after 80% growth in 2010, despite a 36% increase in units due to aggressive price reductions.
• Supply growing more than 2X faster than demand as both existing players and many new entrants significantly expanded capacity in a disappointing year for demand putting pressure on prices. Unyielded 2” equivalent wafer capacity is expected to rise 67% in 2011 vs. a 29% increase in LED demand to 75B die causing the 2H’10 surplus to widen in 2011.
• The growing over supply has led to ASP declines of up to 44% for 2011 depending on the segment and a blended ASP decline of 21%. With costs falling slower than expected on underutilization, margins have worsened for most LED manufacturers.

According to IMS Research SVP Ross Young, “All the LED backlighting segments are expected to fall in revenues in 2011 except for TVs which are now expected to rise 13%. However, the growth in TVs is not sufficient to offset the weakness in other segments. In addition, the LED TV market is growing below expectations in 2011 on overall TV market weakness in developed countries which are most able to afford LED TVs and price sensitivity in the developing countries which are enjoying the fastest growth. As a result, we have revised downward our LED penetration into TVs from 45% to 43% in 2011, up from 23% in 2010, and from 73% to 68% in 2012.”

Other highlights of the report include:
• Extension of all forecasts to 2016 with the lighting market forecasted to 2020.
• LED lamp and luminaire revenues are expected to rise to $74B in 2020, reaching a 42% unit share and 73% revenue share of the lighting market as costs and prices fall and incandescent bans take place worldwide. However, LED growth is expected to slow on increased penetration and long lifetimes by the end of our forecast with LED lamp revenues falling from 2018, limiting the window for companies to take advantage of the growth in LED lighting.
• LED TV panel shipments rose 22% Q/Q and 82% Y/Y, but were 10% below suppliers’ targets. LG Display remained #1 in TV panel and LED TV panel share, while Samsung led in LED consumption for TVs at 1.2B 20x40 mil equivalents. The average number of 20x40 mil LED equivalents per LED TV fell 6% Q/Q o 165 on product mix changes.
• LED monitor panels were up 5% Q/Q and 115% Y/Y to earn a 43% share, up from 41%. Q2’11 LED monitor panel shipments were 13% below target on weakness in the monitor market. LG Display led in monitor panels, LED panels and LED consumption.
• Notebooks displays were 100% penetrated by LEDs for the first time in Q2’11. <10” notebook panels are expected to overtake 14.x” panels as the 2nd most popular size in Q3’11 on the strength of the tablet market. LG overtook Samsung in notebook panels, LED panels and LED consumption.
• A deeper dive into the automotive market looking at multiple die sizes in each automotive application as well as forecasts for # of LEDs per vehicle.