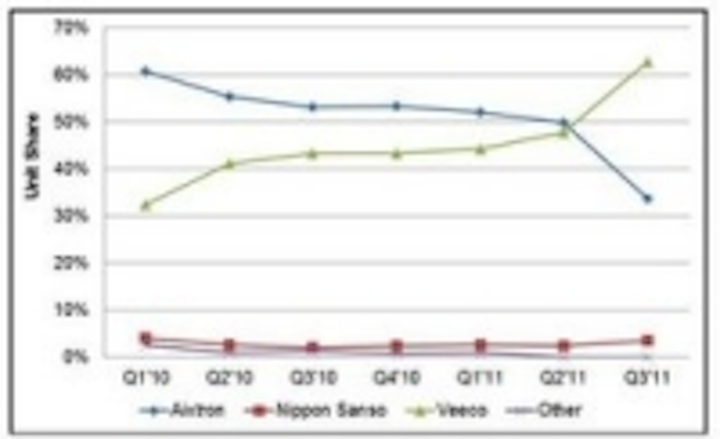 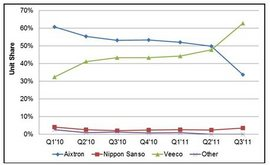 · MOCVD shipments for all applications fell Q/Q and Y/Y to 170 units. It was the first Y/Y decline in at least 2.5 years. The decline can be attributed to depressed utilization in the GaN LED space along with a growing oversupply in LEDs, tight credit, facility readiness and expiring subsidies in China. A bright spot was rising shipments of MOCVD systems for GaN on silicon.

· MOCVD revenues were down sequentially for the 3rd consecutive quarter and Y/Y for the first quarter in at least 2 years, falling to $340M.

· Veeco led in total MOCVD unit and revenues for the first time, earning a 63% share of tool shipped, shown in Figure 1, and 65% share of revenues. Aixtron’s share fell from 50% to 34% in units and 52% to 32% of revenues. Veeco did benefit from the recognition of previously shipped MaxBright reactors to the GaN LED market. However, if those were excluded, Veeco still would have enjoyed a commanding 56% to 40% unit share advantage indicative of the acceptance of this new platform and Aixtron’s customer delays.

GaN is the dominant application for MOCVD tools which are used to produce blue/green LEDs. Highlights include:

· In Q3’11, GaN MOCVD tools accounted for 90% of the total MOCVD market with shipments of 152 units, down 18% Q/Q and 34% Y/Y. It was the lowest total since Q1’10. If previously shipped but unrecognized reactors from Veeco weren’t included, shipments would have been the lowest since Q4’09.

· China earned its highest share to data at 82% of unit shipments. No other region had a double-digit share. India took its first MOCVD system for GaN in at least 3 years.

· Veeco’s unit share surged from 48% to 70% while Aixtron’s share fell from 49% to 26%. If previously shipped, but unrecognized Maxbright reactors were excluded, Veeco would have still had a commanding share advantage over Aixtron at 63% vs. 32%. Veeco’s share advantage was even larger on a revenue basis.

· Veeco had the two best-selling models in Q3’11 with the MaxBright and the K465i each enjoying more than a 30% share. They were followed by the CRIUS I, CRIUS II and G4.

· By region, Veeco led in China for the 4th consecutive quarter and also led in Taiwan for the first time.

· 2” systems once again dominated due to China’s dominance, earning an 87% share of tools installed in Q3’11.

· Including all of Epistar’s majority owned subsidiaries in China, Epistar had the highest number of merchant MOCVD systems installed followed by Samsung LED and San’an tied for #2.

· As a result of the Q3’11 weakness, reduced guidance from MOCVD manufacturers and discussions with LED manufacturers, we have reduced our 2011 forecast to <700 tools, a 9% reduction vs. the most recent forecast.

· This quarter, we provided LED manufacturers’ optimistic, base and pessimistic forecasts for 2012 GaN MOCVD installations, producing an interesting range. The base forecast is now less than 400 tools, a 43% reduction from 2011. However, we still see 2012 as the 3rd best year ever for GaN MOCVD installations due to additional players entering from China, the existence of multi-year MOCVD subsidy agreements between certain Chinese provinces and local MOCVD suppliers and existing players buying new, more cost effective tools with wider process windows to go after new markets.

· MOCVD supplier share is forecasted for 2012 based on interviews with LED manufacturers.

· We also expect to see 4” and 6” installations surge as companies prepare for the growth in lighting market demand.

According to IMS Research SVP Ross Young, “The remainder of the Q4’11 issue of our Quarterly GaN LED Supply and Demand Report will be distributed shortly and will include updated forecasts for lighting demand given China’s recent incandescent ban announcement and the latest backlighting results and forecasts factoring in new, low cost direct LED backlights introduced into developing markets. We will also be updating our forecasts through 2016 for packaged LED revenues, LED supply, LED and MOCVD supply/demand and sapphire supply, demand and pricing. As we have heard from many of our subscribers, this report continues to be the most comprehensive and valuable quarterly report on the LED industry.”

For more information on this report, please visit www.ledmarketresearch.com or contact ross.young@imsresearch.com.