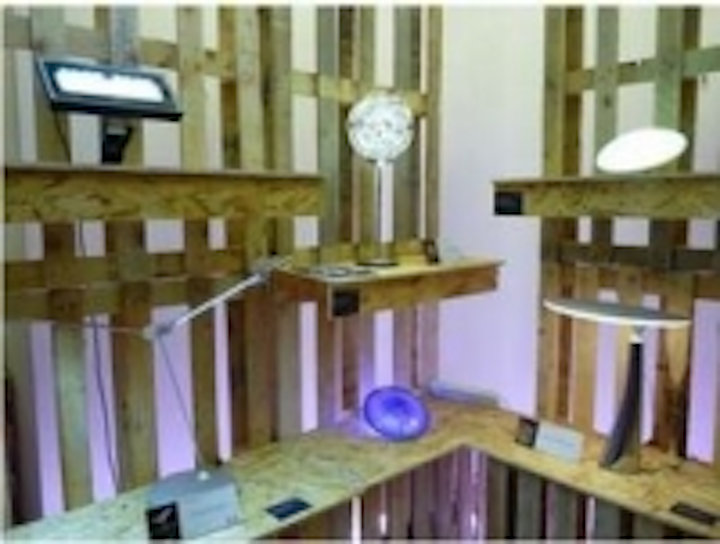 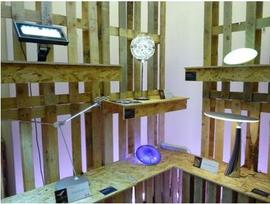 Taiwan Trade Centre’s “Taiwan LED Lighting Exhibition,” which held its opening ceremony at the Gusu Gallery last Thursday, the 27th of October, was greatly successful in fulfilling its purpose of introducing the UK market to the wealth of high-end LED lighting products that Taiwan has to offer, along with creative Taiwanese home ware, snacks and ornamental orchids.

The event opened with an exclusive lighting up ceremony in which 5 special VIPs helped switch on the links between Taiwan and the UK; another step towards bringing the UK lighting market into the LED age. Mr Donald Lu, Managing Director of the Taiwan Trade Centre and organiser of the event, was joined by Ambassador Chang of the Taipei Representative Office, Mr Peter Hunt, CEO of The Lighting Association, Mr Martin Phelan, Director of Investment, UKTI and Mr Craig Harrison, Head of Business Growth, London & Partners, to each press a switch and ceremoniously light up the spectacle of multi-coloured LED wall washers, T8’s, decorative home lighting and street lighting exhibited.

In view of the increasingly environmentally friendly trend of the UK lighting market, the exhibition aimed to emphasise to the UK the usage of Taiwanese LED lighting as an integral part of green energy by showcasing the high-quality of the island’s LED lighting products and their ability to suit UK based demands. The stylish wooden pallets that decked out the venue complimented the energy saving nature of the LED lighting products on display, recalling both the vibrancy and green nature of Taiwanese culture and the importance of renewable energy.

A total of 61 people attended the event, including buyers from John Lewis, VIP’s from The Lighting Association and journalists from Lux Magazine. Upstairs, guests were given the chance to talk to representatives from 3 outstanding UK-based Taiwanese LED lighting suppliers, Navitas, Lumineco and G-LED, and to browse the creative domestic LED lighting of Taiwan-based companies Qisda and Yantouch, creating excellent networking and business opportunities. Downstairs, a wealth of innovative Taiwanese home ware was showcased from companies such as “TOAST,” “Lin’s Ceramics Studio”, “think if design,” and “The One Images”, all represented by the 100% Design exhibition which took place this September.

Peter Hunt, Chief Executive Officer of The Lighting Association in the U.K said at the show that as competition in the U.K. LED lighting market has grown fiercer, consumers there pay most of their attention to quality, energy efficiency and pricing. There is no doubt, he remarked, that LED lighting has overtaken other traditional forms to be the lighting of the future, and it is for this precise reason that it has received such support from the British Government and lighting industries in the U.K. After visiting the exhibition, Hunt said Taiwanese firms were heading in the right direction, and he believed they had a good opportunity to penetrate the U.K. market. Martin Phelan, Director of Investment, UKTI, said he believed that the low-energy consumption lighting products exhibited at the show would be the future of common use products, with increasing numbers of households, offices and companies bound to put them in use. To have the chance to witness Taiwan’s advances in science and technology, he commented, was extremely important to the U.K. Noel Saunders, Managing Director of John Lewis Stratford also remarked upon the show’s success in putting forth the appeal of the high-quality of Taiwanese products, of which he felt too few people were aware. “Taiwan LED Lighting Exhibition,” he believed, gave people the chance to understand the attraction of Taiwanese products, from lighting to food.

Guests also nibbled on Taiwanese snacks sponsored by Taipec and revelled in the beauty of ornamental Taiwanese orchids sponsored by V-Flora, which were sparkling in the light of the LED products on display. A prize draw marked the end of the event, in which 12 lucky guests won a selection of fantastic prizes which included LED lighting products, orchids and Taiwanese food boxes.

The combination of original Taiwanese elements present at the venue, from decorative home ware, to food and orchids all rendered a special atmosphere which cast a bright light on the multi-faceted installation and application of Taiwanese LED lighting in different contexts. Moreover, by giving guests a unique glimpse into the charm of the culture in which Taiwanese LED lighting was fostered, the event highlighted the importance of the island’s contribution to energy saving lighting both in the UK and worldwide. “Taiwan LED Lighting Exhibition” was an encapsulation of its slogan: “Lighting up the UK, Switch On to a Brighter Future!”