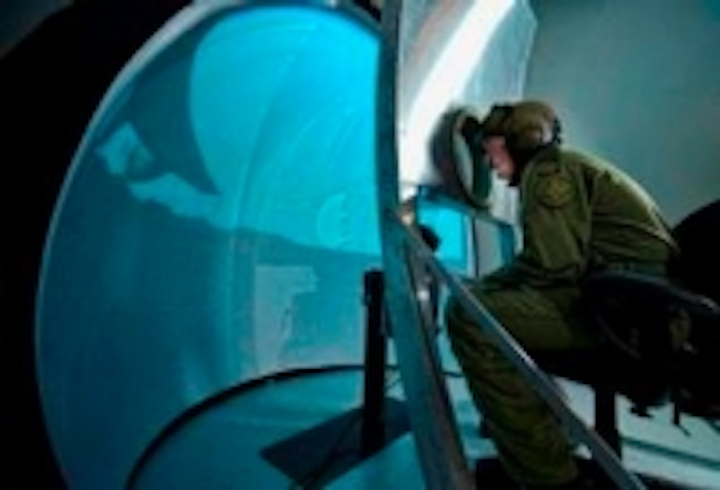 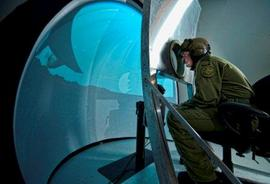 The Royal Canadian Air Force uses the revolutionary HOT simulator to train loadmasters in “true-to-life” scenarios. HOT simulates combat and search and rescue scenarios, training military personnel to become faster and more accurate in detecting threats and search targets. This increases the speed of their adaptive responses so that a quick assessment of imminent threat is communicated and defensive actions initiated. Equally impressive, the HOT can network with other flight simulators, allowing entire crews and even multiple aircrew to train together as a team.

Christie worked with the DRDC and industry partners during the design phase to ensure that the projection system met the program requirements. With the upgrade, its visual system is now powered by two dual-input Christie Matrix StIM™ projectors that provide a higher resolution image and wider field of view from the aircraft for a more realistic training experience. Employing their headset and countermeasure dispenser, students train for day and night missions, stimulating their night vision goggles (NVG) with the Christie Matrix StIMs, something that couldn’t be achieved with a single projector with the first version of HOT. Results of data showed that with the HOT, trainees made 79 percent fewer errors and reduced their response time by 11 percent.

“We have worked with Christie before and their products and expertise are both reliable,” said Stuart Grant, Defense Scientist, DRDC. “When we were looking for the latest-generation visual systems with Infra-red capabilities, the Christie solution was the most mature system available. The Christie Matrix StIM has the means for delivering the features we needed for NVG stimulation, as well as blending, warping and other capabilities. We also selected it for its low heat emission due to its LEDs, an important consideration for our trainees who were often subject to uncomfortable heat levels.”

According to Jeff Clark, President of Renaissance Sciences Corporation, and NVG visual system integrator on the HOT project, “We recommended the Christie technology for its ability to provide four color NVG scenes, instead of the three-color industry standard. Our software is capable of deploying six different wavebands of simulation on one video card, so working with the Christie Matrix StIMs led to an impressive convergence of NVG stimulation technology."

The award-winning Christie Matrix StIM is the world’s first true solid state LED-based simulation projection system and the first to provide simultaneous and independent control over both the visible and near-IR spectrum using LED illumination. It utilizes Christie TrueIMAGE™ integration tools for geometry, image blending and warping, color and brightness uniformity, low-latency and overall reliability and sustainability. Built with no consumables for a virtually maintenance-free system, the StIM features extraordinarily long life, image quality and ease of service.

Visit Christie at Booth #2049 at I/Itsec 2011, in Orlando, Fla., Nov 28 to Dec.1, to see a broad spectrum of industry-leading integrated simulation solutions.

DRDC is an agency of the Canadian Department of National Defence (DND) responding to the scientific and technological needs of the Canadian Forces. The agency is made up of eight research centres located across Canada with a corporate office in Ottawa. DRDC has an annual budget of $350 million and employs over 1600 people. With a broad scientific program, DRDC actively collaborates with industry, international allies, academia, other government departments and the public security community. For more information, visit www.drdc-rddc.gc.ca.