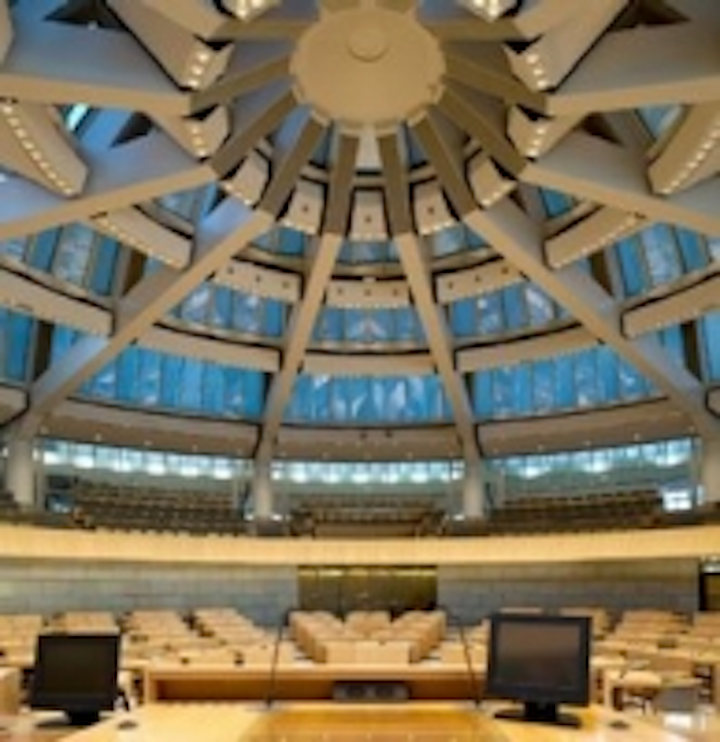 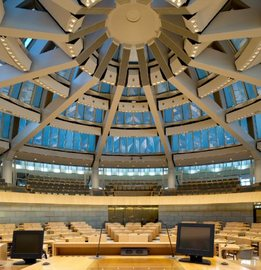 While this modern building has lost nothing of its futuristic atmosphere after over twenty years, the same could not be said of the lighting in the assembly chamber.

“It was harsh and unfriendly, and the lamp ballasts constantly produced a quiet but annoying sound. They also emitted heat, which was not pleasant for those using the chamber. Enhancing the parliament members’ well-being was, therefore, a pressing need.”

That was the conclusion reached by the lighting designers at Buro Peter Andres Lichtplanung in Hamburg. This firm was given the job of improving the working conditions by means of a new lighting concept, and at the same time minimizing the environmental impact and energy. The energy expenditures of EUR 50,000 a year were very high compared with those of today’s lighting options.

Buro Peter Andres developed a lighting concept in which different lighting components were geared precisely to one another and to the requirements of the chamber and its users. For general lighting, the handsome Hoffmeister 170 un.limited LED downlights were installed in four concentric circles, unobtrusively following the chamber’s floor plan.

These downlights are fitted with the Philips Fortimo LED Downlight Module (DLM) 2000lm, which produces the same light as the original halogen lighting, but with much greater energy-efficiency. The indirect light from the linear floodlights, which have been fitted around the slanting dome, creates a very pleasant atmosphere at night. LED spotlights provide dramatic illumination of the rostrum.

Thanks to the new lighting, the annual energy costs of EUR 50,000 have been reduced to just EUR 5,000, while creating the most comfortable light possible. In order to obtain the highest energy efficiency, fins that move with the sun have been fitted on the exterior of the roof. The use of daylight regulation means that daylight and artificial light are constantly in balance with one another reducing cooling costs.

With this innovative lighting solution, the NRW parliament has also come a considerable way towards achieving its CO2 reduction targets – 20% lower in 2010.