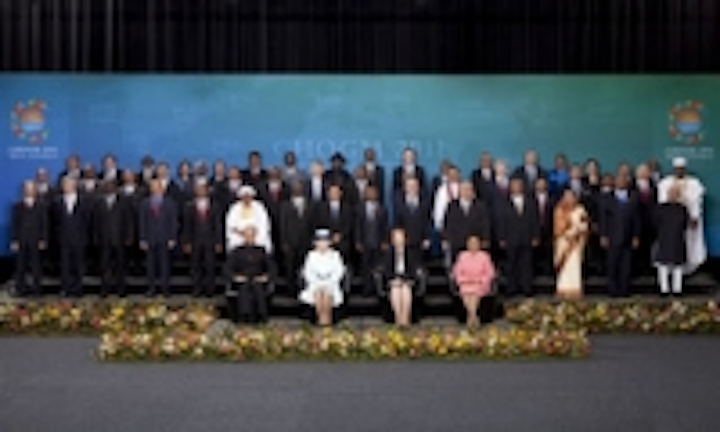 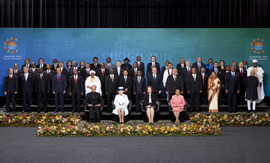 The photo session for the 22nd CHOGM event, the largest gathering of world leaders ever in Australia, was staged in Pavilion 1 at the Perth Convention & Exhibition Centre. Official photographer Andrew Taylor and a host of national and international media and TV crews needed an even and consistent 4500 Lux level right across the podium on which the 50 world leaders - including Head of the Commonwealth, Queen Elizabeth II - were posed for the photo.

Clifton's Martin McKinney was the lighting director for the shoot and he specified the 12 LEDWash 600s, which were rigged on three trusses, flown at two, five and eight metre distances from the stage.

Using LED units also offered the massive advantage of keeping the temperatures comfortable, so the amassed Heads of State did not need to endure high heat levels that would have been output by using conventional fixtures for the task.

Cliftons - which has the largest inventory of Robe fixtures in Australia - won the contract to supply the lighting for the official photo shoot partly because they are a 'preferred supplier' to PCEC, and also based on their performance and reputation for excellence.
Matthews continues, "The LEDWash 600s worked absolutely perfectly for the official photograph and Andrew Taylor was really happy with the results.” He goes on to say that in all environments in which Cliftons have been using their LEDWashes, they are proving a "Real hit" with LDs, crew and promoters with their light weight, fabulously smooth colour mixing properties and low power consumption.