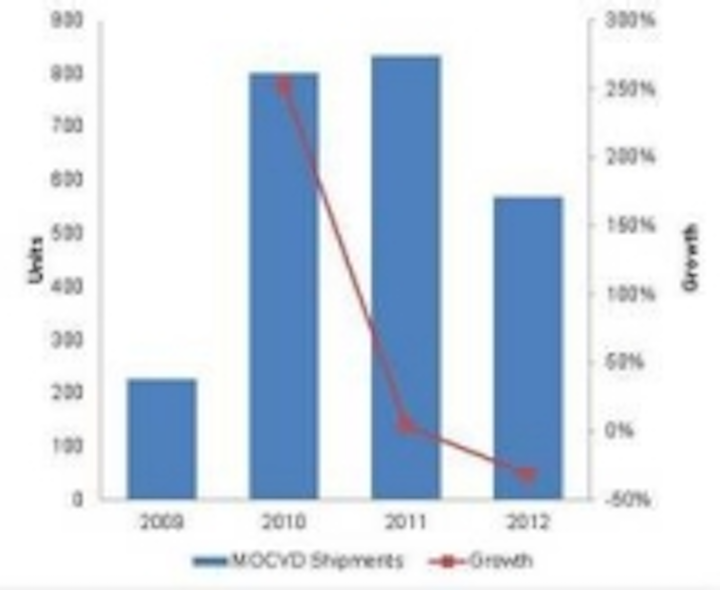 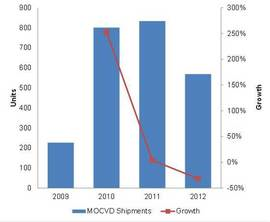 In June, the previous quarter’s report lowered the annual GaN LED revenue growth forecast to just 4% to $8.7B on rapid 1H’11 ASP reductions from a rising surplus, slower LCD and LED panel growth and the lighting market not yet cost competitive. With growth slowing, margins shrinking, the oversupply worsening and credit in China tighter than expected, LED manufacturers have pushed out a significant number of installations in 2011 resulting in a surprisingly large MOCVD shipment downgrade.

IMS Research has lowered its 2011 GaN MOCVD forecast by 24% to 833 reactors, which still represents 4% growth over 2011. Smaller capacity growth should slow down the LED oversupply and stabilize pricing which will benefit near term LED manufacturer profitability and eventually lead to more tool sales resulting in an upgrade to the 2012 outlook.

Looking to 2012, the 2011 delays along with 13 new entrants in China taking tools should result in a healthy 2012 GaN MOCVD market of 569 tools, down 36% vs. 2011, but higher than previously expected. Tool shipments are forecasted quarterly and identified by customer and wafer size. These new entrants are a key reason for the growth with these companies accounting for 110 tools in 2012. Slower price reductions from a smaller surplus should boost the 2012 GaN LED market to $10B, up 15% with packaged LEDs for lighting up 35% to $2.3B.

China is expected to continue to dominate the market for GaN MOCVD tools, market, but shrink to 61% in Q4’12 as Taiwan and Korea rebound.

Epistar is expected to be the #1 MOCVD customer in 2012 followed by San’an, GCL Opto, SemiLEDs and Genesis Photonics. The report also identifies two new MOCVD manufacturers who are expected to win business from 2H’11.

• Shipments were down Y/Y for the first time since at least 2008, falling 14% if Veeco’s MaxBright reactors were excluded as Veeco has not yet recognized revenues for this new tool in according with GAAP.

• Including MaxBright reactor shipments, installations were still down 2%.

• Excluding MaxBright shipments, China continued to dominate the market, accounting for 70% of installations with Korea and Taiwan at 11% each.

• Lextar was the top customer in Q2’11 and 9 of the top 10 customers had operations in China.

• Aixtron remained #1 in GaN MOCVD shipments, gaining 4 points of market share to 57% excluding MaxBright with Veeco losing 3 points to 41%. Including MaxBright reactors, Aixtron’s advantage slips to 49% vs. 48% for Veeco, the closest it has ever been between the two competitors.

• By region excluding MaxBright, Veeco led in China, USA and Europe while Aixtron led in Korea and Taiwan. Veeco’s K465i remained the industry’s most popular tool, but Aixtron’s CRIUS II and G5 each gained share and rose to the #2 and #3 positions.

• The 4-in shipment share rose more than 50% while the 6-in share more than doubled as companies move to larger wafer sizes to boost their output and lower their costs.