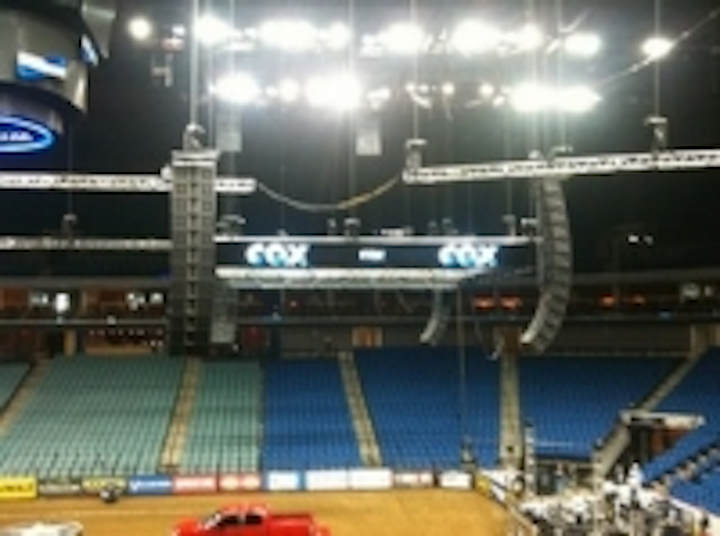 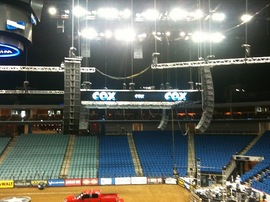 Broadcast nationally on Versus, The Express Classic Presented By American Hoggers on A&E became the first PBR event to feature the specially designed televised digital signage. Tulsa was be the 22nd stop on the BFTS, which features the Top 40 bull riders in the world and makes 29 stops in 23 states.

The signage was hung 25 feet above the floor in a horseshoe format capable of displaying full motion graphics and sponsor acknowledgements. The system included twenty-four (24) LED modules suspended in the air, opposing the event’s bucking chutes. All of the modules will be connected, creating seamless visuals across approximately 325 square feet of LED signage.

“ANC’s event digital signage enables our corporate partners a greater flexibility to promote their brands both inside the venue and for viewers watching on television,” said Bob Funk Jr., chief executive officer of Express Lazy E Sports Production, the event’s co-producer. “We look forward to working with ANC to integrate the technology into other customized positions which generate visibility for our partners in the future.”

Through the agreement with Express Lazy E Sports Production, ANC Sports created all the still acknowledgements and full motion animations for the bull riding event’s partners, as well as PBR graphics and crowd prompts. Additionally, two ANC technicians were on-site throughout the event to ensure the signage delivered the highest impact visuals.

Driven by ANC Sports’ patent-pending VisionSOFT™ operating system, the signage system provides new televised branding and entertainment opportunities to bull riding, such as congratulating winners. In addition, the signage is capable of synchronizing to feature one dynamic full motion visual which can provide moments of exclusivity or segmenting into individual images for various sponsors.

The 2011 BFTS season began at world-famous Madison Square Garden, and culminates Oct. 26-30 in Las Vegas at the richest bull riding event in the world, the PBR Built Ford Tough World Finals. The Finals is where the 2011 PBR World Champion will be crowned and awarded the $1 million Built Ford Tough bonus.

About the Professional Bull Riders, Inc. (PBR)
The PBR is the world’s premier bull riding organization. More than 100 million viewers annually watch over 400 hours of primetime PBR programming on VERSUS, NBC, CBS and networks around the world. The PBR has awarded over $100 million in prize money and 20 riders have earned over $1 million, including Justin McBride with $5.5 million -- the most of any western-sports athlete in history. The PBR was nominated as 2010 Sports League of the Year at the Sports Business Journal Sports Business Awards, alongside the National Football League, National Basketball Association and Major League Baseball. Nearly 2 million fans attend Built Ford Tough Series and Touring Pro Division events each year. For more information on the PBR, go to www.pbr.com, or follow on Facebook at www.facebook.com/TeamPBR and http://twitter.com/TEAMPBR.