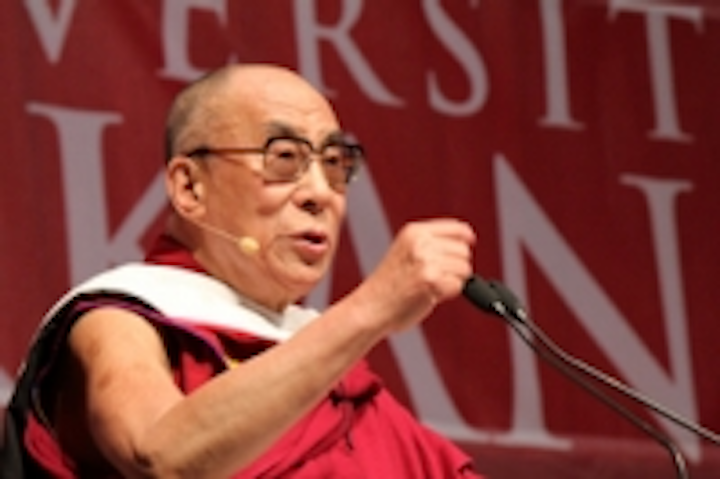 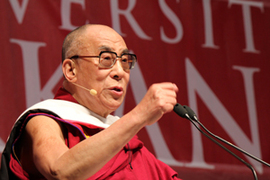 Fayetteville, Ark. – Chauvet, a leading manufacturer of professional lighting, announces the main stage of Bud Walton Arena, on the campus of University of Arkansas [link: http://www.uark.edu/home/], was lit by 20 COLORado™ 1 Tri Tour wash lights for a special event featuring the Dalai Lama [link: http://www.dalailama.uark.edu/]. The fixtures were specified and installed by TES Productions [link: http://www.tesproductions.com/], based in Tulsa, Okla.

The stage was swathed in red curtains accented by two gold curtains elegantly gathered with gold rope. These flanked the minimal seating needed for the lecture series: two sets of two gold armchairs placed on either side of a red loveseat accented by small wooden tables. A lectern was perched stage right. All of these elements were downlit by the 20 COLORado™ 1 Tri Tour wash lights from a proscenium truss.

The Dalai Lama appeared in two forums when he visited the university. There was a morning panel discussion entitled Turning Swords into Ploughshares: The Many Paths of Non-Violence. He also delivered a keynote address entitled Non-Violence in the New Century: The Way Forward.

The Dalai Lama was joined by two other iconic figures of non-violence: Sister Helen Prejean, the death-row activist whose opposition to the death penalty inspired her book, Dead Man Walking: An Eyewitness Account of the Death Penalty in the United States; and Vincent Harding, whose career in the African-American freedom movement began in 1958, working alongside Martin Luther King, Jr., which included writing King's speech against the Vietnam War, Beyond Vietnam: A Time to Break Silence.