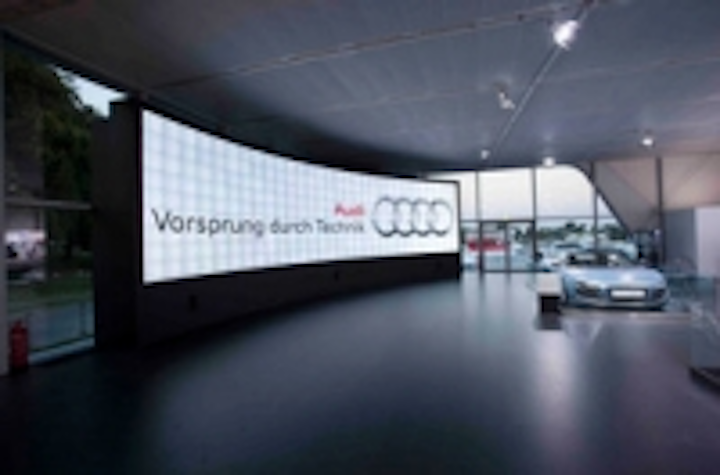 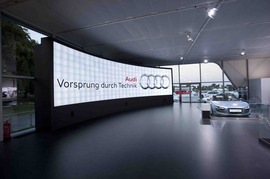 CPL Builds Largest Christie MicroTile Wall in Europe
UK AV specialists Central Presentations Ltd (CPL) created a new record at the 2011 Goodwood Festival of Speed, by building the largest Christie MicroTile video wall yet for a temporary installation in Europe.
The Wall measured 12.25 metres wide by 2.754 metres high and was created using 270 MicroTiles. It was a major element in the indoor exhibition pavilion area of the high-profile Audi stand.
The Festival of Speed, held in the beguiling grounds of Goodwood House in Sussex and often dubbed a "motoring garden party", is a premium event celebrating the culture and worlds of motor sport and all things automotive.
CPL - with bases in the West Midlands and Bristol - was asked by leading digital brand agency Twofour to create a solution for their client in the exposition area of the event. They wanted a prominent and bright wall curving around one corner of the stand on which to show rolling video footage and graphics relating to a whole range of cars. A number of new Audi models were also on display on the stand, which was in a glass pavilion, so the screen had to be clearly visible in daylight. The brief also specifically stated that the screen or wall should not distract from the cars, which is a challenge for any large hi-impact surface area.
CPL's team of Scott Pearson from the Kenilworth office and Nick Diacre from the Bristol office combined imaginations, experiences and considered all the options.
LED was bright enough for the application, but a really high resolution was needed as some of the content was running in full HD, and needed to be clearly visible to visitors even when they were very close up to the screen. Plasmas would not give the curvature. They also needed something that could look extremely neat and tidy with the technical elements easily conceal-able, so projection was out.
However ...... Christie MicroTiles ticked all the boxes!
Based on proven DLP technology, MicroTiles are specifically designed for giving maximum image quality in demanding, high ambient light level environments.
The wall's 13 metre arc fitted snugly around the corner of the stand. CPL had a special plinth fabricated which stood a metre off the floor and formed the base of the installation. It was painted in a specific matt dark gun metal RAL colour to match other elements of Audi's branding and blend in with the MicroTile wall.
All the video footage was stored in a Pandora's Box media server, and output to the screen via a Christie Spyder x20 screen management system programmed by Diacre. They ran 6 video outputs to the wall, which was split into 6 sections, all edge-butted together in the Pandora's Box. Both static and Moving PiPs also appeared on the Wall during the looped video show, all controlled and time aligned via the Spyder, which ran everything automatically and continuously from 8 a.m. to 6 p.m. each day of the event.
Audio was an important part of the whole Audi AV experience, so CPL supplied a high quality d&b 3.1 surround sound audio system which was integrated into the base of the MicroTiles Wall. The speakers were d&b E6s with E15 subs, and the actual track was also run through the Pandora's Box.
The 'hot' backup was 6 x MacBook Pros running Payback Pro.
Pearson and Diacre worked with a crew of 6 other technicians plus locals for the build and get-out, with three CPL techs looking after the system day-to-day while the event was live.
The biggest challenge was the physical task of amassing that many MicroTiles during one of the busiest weekends of the summer event and festival season!