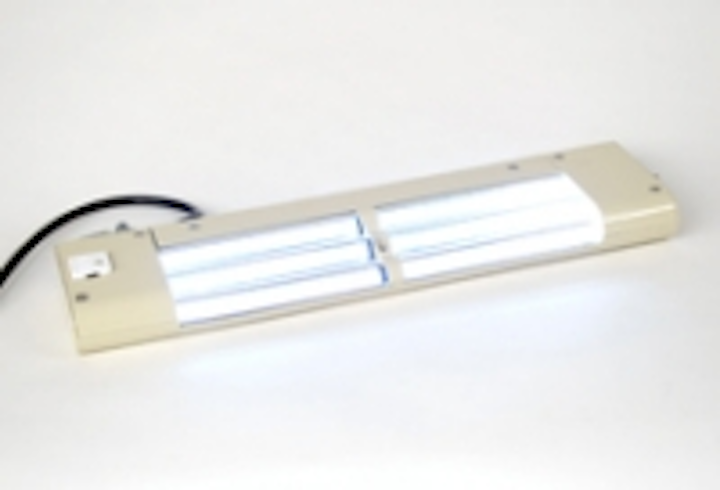 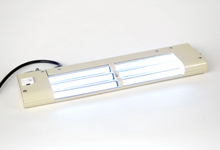 ARLINGTON, Va. – One Sailor’s request to replace humming fluorescent bulbs with a quiet alternative inspired the Office of Naval Research (ONR) to create the Solid State Lighting (SSL) project, being tested aboard USS New Hampshire (SSN 778), which got underway Feb. 28.

A product of ONR’s TechSolutions program, SSL is being installed aboard several ships and submarines across the U.S. Navy, and is one of several rapid-response technologies created using recommendations and suggestions from Navy and Marine Corps personnel.

TechSolutions funded development and certification of a suite of LED fixtures that are direct form-fit-function replacements for all the T8W5 light fixtures currently used by the Navy. The request to replace noisy fluorescent bunk lights with LEDs was submitted by a sonar technician at Commander, Submarine Force, Atlantic Fleet, Norfolk, Va.

Naval Sea Systems Command (NAVSEA) has installed 33 fixtures on New Hampshire. The Navy is also hoping to install SSL onto USS New Mexico (SSN 779) at a future date. The goal is to eventually retrofit the entire forward section of the New Hampshire with SSL to assess the benefits of the advanced lighting system and measure savings achieved.

Although the SSL is in its early stages, the LED fixtures are showing great promise. Not only are they a quality of life improvement, but compared with fluorescent lights, LED fixtures last longer. They are more efficient, reducing maintenance requirements, energy usage and costs associated with storage, handling and disposal. Long term, SSL usage fleetwide could add up to considerable savings and improved readiness.

“LED lights are an immediate way to improve efficiency across the fleet,” said Roger Buelow, chief technology officer at Energy Focus Inc. and principal investigator for the SSL project.

“Essentially, [SSL] lowers our workload and the amount of onboard spares that we are going to have to take on major deployments,” said Chief Petty Officer Scott Brand, an electrician’s mate on the New Hampshire. “That will significantly decrease the amount of space we have to consume with light bulbs.”

LEDs contain no hazardous materials, unlike fluorescents, which must be stored on board until warfighters can perform expensive and intensive disposal procedures.

TechSolutions worked with Energy Focus to produce patented LED fixtures that are direct replacements for fluorescents. The replacements produce the same light output, but use half the power.

“As an example, the fluorescent version of the berth light found in every Sailor’s sleeping area runs at over 10 watts and is a legendary maintenance headache due to starter and lamp failures,” Buelow said. “Because of TechSolutions, the fleet now has a qualified LED version that runs at five watts, delivers the same light output and will last for a decade without maintenance.”

While Energy Focus fixtures have had a good track record on Navy ships, TechSolutions’ products were the first to be fully qualified by the service. Those components met the most stringent electromagnetic interference standards, requiring innovative manufacturing methods. “Making any electrical appliance tough enough to pass Navy shock and vibration tests is a challenge,” Buelow said.

TechSolutions is a rapid-response program that accepts recommendations and suggestions from Navy and Marine Corps personnel on ways to improve mission effectiveness through the application of technology. TechSolutions works closely with customers to meet specific requirements that cannot be readily satisfied with commercial-off-the-shelf technologies. Typical turn-around time for a working prototype is 12-18 months.

About the Office of Naval Research

The Department of the Navy's Office of Naval Research (ONR) provides the science and technology necessary to maintain the Navy and Marine Corps' technological advantage. Through its affiliates, ONR is a leader in science and technology with engagement in 50 states, 70 countries, 1,035 institutions of higher learning and 914 industry partners. ONR employs approximately 1,400 people, comprising uniformed, civilian and contract personnel, with additional employees at the Naval Research Lab in Washington, D.C.