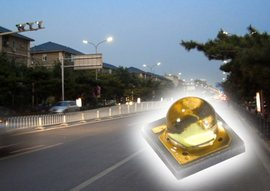 LED technology in street lighting is on the advance across the world. As part of the Chinese "10 cities 10,000 lights" project, three districts in the capital Beijing were equipped with LED street luminaires by the HBTechnology CAST Group, using OSLON SSL LED by OSRAM Opto Semiconductors. They ensure that the busy streets are brightly lit and save up to 50% in energy compared with conventional luminaires.

In some parts of Beijing, LED modules for street luminaires with an output of 120W or 180W now replace the conventional 250W or 400W sodium vapour lamps. As a result, these urban districts achieve energy savings in street lighting of up to 50%. For the metropolis of Beijing with its high energy consumption, this is of great importance.

In addition to energy efficiency, light quality also played a major role in the decision for conversion. Dong Cheng, Chao Yang and Da Xing are urban districts bustling with life. For that reason, excellent illumination was required to increase safety for both drivers and pedestrians.

The city planners decided in favour of the powerful OSLON SSL LED by OSRAM Opto Semiconductors. They are part of the 1-W class; with their compact size of only 3 x 3 millimetres, they are currently the smallest LED in their class and luminous efficacy on the market. Even at higher flux rates, they work reliably and efficiently. Their good color rendering index with natural appearance of colors and clearly contoured rendition of contrasts provides additional safety on Beijing's streets.

OSLON SSL LED have a beam angle of 80 degrees and are thus ideally suited for street lighting; the ideal beam angle for this application is 120 x 80 degrees.

"In this way, the LEDs meet all of our technical requirements and we have no problems integrating them into the external lenses. The result is homogeneous and powerful illumination of the streets without liht pollution", explains Bing Hu, Managing Director of the HBTechnology CAST Group. The long lifespan of OSLON SSL LED also results in lower maintenance requirements, which might otherwise have obstructed the flow of traffic and generated additional costs.

"This allows us to realize lighting applications requiring a lot of light by using fewer LEDs. If, as planned, Beijing converts all of its street lighting to LED, the savings potential is enormous", states Kai-chong Cheng, Marketing Director at OSRAM Opto Semiconductors in Asia.

China is the leading market in LED street lighting, representing approx. 50% of applications worldwide. The pilot project in the capital is to be followed by other cities.

OSRAM is part of the Industry sector of Siemens and one of the two leading lighting manufacturers in the world. Its subsidiary, OSRAM Opto Semiconductors GmbH in Regensburg (Germany), offers its customers solutions based on semiconductor technology for lighting, sensor and visualization applications. OSRAM Opto Semiconductors has production sites in Regensburg (Germany) and Penang (Malaysia). Its headquarters for North America is in Sunnyvale (USA), and for Asia in Hong Kong. OSRAM Opto Semiconductors also has sales offices throughout the world. For more information go to www.osram-os.com. OSRAM, the parent company, offers its customers a complete supply chain in the LED sector including components, modules and solutions. More than 50% of annual outlay on research and development is devoted to these technologies.