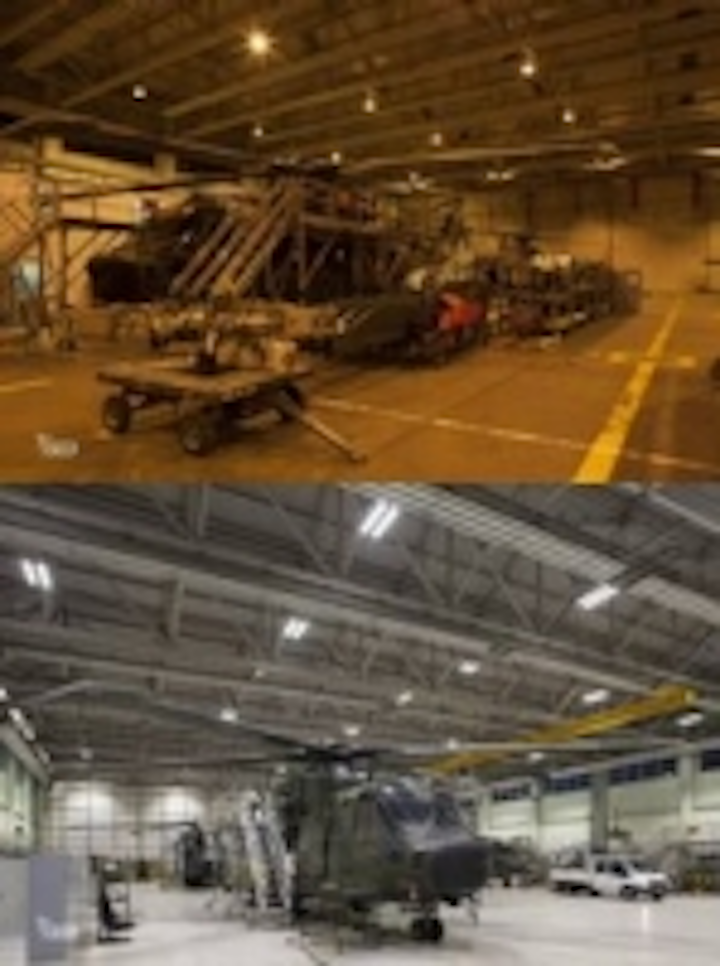 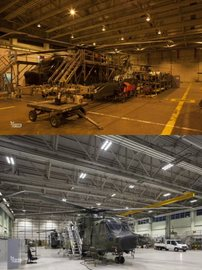 Maintenance staff at a frontline RAF helicopter base in the UK are enjoying a better working environment, thanks to new lighting that not only brightens their working day but also saves energy and money.

The Defence Infrastructure Organisation (DIO) has worked with its regional industry partner PriDE to improve lighting in hangars at RAF Benson, in Oxfordshire, as part of DIO’s three-year investment initiative, known as the Energy Spend to Save Programme.

RAF Benson is home to two-thirds of the RAF’s support helicopter force and a good example of what can be achieved under DIO’s programme, which will see £105 million invested in energy efficiency initiatives.

This investment should secure some £110 million worth of energy savings by 2014 with an ongoing saving of £70 million each year afterwards.

Matt Foley, DIO Head of Utilities, said: "DIO’s priority is to support our Armed Forces as they prepare for operations, but the MOD has a duty to balance delivery of this support with measures that help to achieve Government targets that will help combat the threat of climate change.

"The new lighting at RAF Benson is a winner for all concerned. RAF staff get better working conditions, whilst the MOD takes another step in ‘greening’ our operations and supporting important environmental goals set by the Government."

It is reviewing the lighting requirements of the MoD to reduce costs and enhance operational activity and efficiency in line with this programme.

Peter Smith, Energy and Sustainability Director at PriDE, said: "RAF Benson is one of the busiest stations in the RAF, with its four hangars experiencing a high volume of traffic due to day-to-day operations. Achieving the right level of lighting in this area is critical as high visibility is paramount.

"By introducing a tailored LED lighting scheme sensitive to the operational needs of these particular buildings, PriDE is able to offer not only large-scale savings, but noticeably improved operational lighting."

One hangar has been converted already and, as a result of the lighting success, the remaining hangars will be updated over the next 12 months.

Senior engineering officer Sqr Ldr Steve Rowley said: "We’re extremely pleased with the effect of the new lighting system in the hangar. Much of the engineering work undertaken on the Merlin helicopter is comparatively complex due to the high-tech systems the aircraft employs, thus maximum light conditions to enable attention to detail is extremely beneficial. In addition, the increase in light levels has given a better and safer overall working environment for our engineers, all of which contributes to successful operations."

The energy-efficient LED technology saves at least 30% on energy costs and reduces carbon emissions. The instant on/off feature means there is no need to wait for the lighting to ‘warm up’, which is a downside to conventional hangar lighting.

1. The Defence Infrastructure Organisation (DIO) is part of the MOD. It is responsible for managing and maintaining land and properties to meet the current and future needs of the MOD and personnel at home and abroad, and to support current operations.

2. Our work includes providing, supporting and improving: operational units; single living and service family accommodation; training areas and historic military sites. DIO actively manages these to ensure the needs of Defence are met, value for money is achieved, our heritage is protected and to achieve our environmental goals.

3. PriDE is a joint venture between Interserve Defence Ltd and Southern Electric Contracting, created specifically to manage DIO’s South East Regional Prime Contract (SE RPC). Valued at around £380m, the SE RPC is one of five regional prime contracts currently in place in the UK. As Prime Contractor, PriDE is responsible for estate management and construction services at almost 100 MOD sites throughout the south-east region, encompassing nearly 6,000 buildings and facilities'. These facilities include some of the MOD’s largest and most prestigious sites such as RMA Sandhurst, St James’ Palace, Cavalry Barracks and RAF High Wycombe.