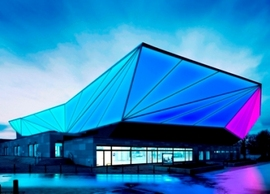 Osram Opto Semiconductors now offers the mid-power LED Duris P 5 in color. The five new versions have impressively high luminous efficacy from a compact form factor, already known from the white version. The LEDs are ideal for architecture lighting and for the hospitality sector, in other words hotels and restaurants.

The five color versions of Duris P 5 are “deep blue” (450 nm), “blue” (470 nm), “true green” (528 nm), “yellow” (590 nm) and “red” (615 to 625 nm). At the heart of the different colors are state-of-the-art chip technologies from Osram, based on either the InGaN (Indium Gallium Nitrite) material system or InGaAlP (Indium Gallium Aluminum Phosphite) depending on the wavelength. Low forward voltages and optimized light extraction result in high luminous efficacies for all types. The “deep blue” version, for example, delivers a light output of 140 mW (at 100 mA and 25 ºC), corresponding to a typical efficiency of 48 percent. Efficiency is defined as the ratio of the amount of light produced to the amount of power consumed.

As members of the mid-power class, the color versions of Duris P 5 are ideal for linear, area or omnidirectional lighting applications in which the light has to be distributed as uniformly as possible. Color mixing is also much easier in applications involving several colors.

More design options for professional lighting
“The color Duris P 5 versions will give our customers even greater freedom in designing luminaires. A good example is the combination of white and colored mid-power LEDs within a luminaire”, said Martin Wittmann, Product Manager Marketing SSL at Osram Opto Semiconductors, and added: “The use of the Duris power class also reduces system costs while at the same time improving the distribution of light and simplifying thermal management.”

Like the white versions in the P 5 family, the colored Duris versions are capable of withstanding extremely harsh conditions. The innovative package technology offers greater corrosion stability compared to conventional mid-power LEDs. The small component dimensions of only 2.6 by 2.2 mm also allow good optical control in connection with secondary optics.

Duris P 5: New areas of application
In addition to architectural lighting and signage applications, the new Duris color versions can be used in LED lamp and luminaire modules with “remote phosphor” technology. In this case, the converters needed to generate white light are not attached directly to the chip but are illuminated by “deep blue” LED from a certain distance, causing them to luminesce. This remote phosphor technology results in uniform distribution of light and high luminous efficacy. The color Duris P 5 versions will be premiered at the Osram booth 1001 at Lightfair 2013 (http://www.lightfair.com/lightfair/V40/) from April 23 to 25, 2013.