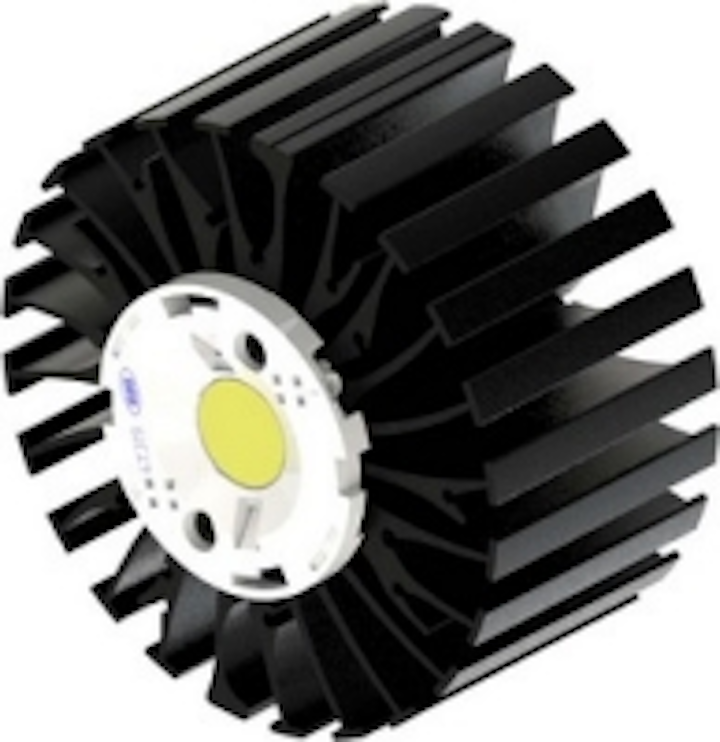 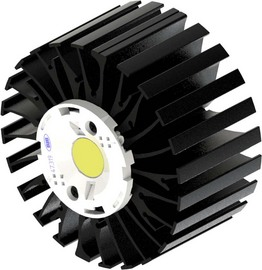 With the launch of the newest generation Philips Lumileds Luxeon Chip-On-Board (COB) LED modules there was an immediate need for a wide range of standard LED coolers.

In the cooperation with MechaTronix Philips Lumileds found a practical and easy way to launch a wide range of standard LED coolers fitting mechanically with the various dimensions of the Luxeon COBs and matching the cooling capacities needed for the whole series.

With this passive LED cooler range MechaTronix aimed at spot, track and down light designs from 600 lumen all the way up to 4.500 lumen in a small size extrusion profile.

The ModuLED Xtra LED coolers are developed in this way that there is an optimal balance between creating cooling surface and leaving enough intermediate space for free air convection.

In this way MechaTronix was able to reach a ModuLED Xtra cooling performance of 1.02°C/W in a package of only 99mm diameter and a height of 80mm, and keeps the Luxeon 1208 COB running at 4.800 lumen at an ambient temperature of 40° Celsius below a case temperature of 80° Celsius.

For those applications running at an extreme high ambient temperature, two active coolers packages where designed
The IceLED Xtra active LED coolers are developed in a package for indoor low bay use with an extremely low noise factor, this delivering a cooling performance of 0.46°C/W.

This makes them extremely suitable for spot, track and down light designs in office, shop environments and silent rooms where extra noise has to be avoided.

All ModuLED and IceLED coolers are foreseen from direct mounting patterns for the various Philips Lumileds Luxeon COB’s, but also offer Zhaga book 3 mounting holes so designers can use COB LED holders if they require solderless mounting of the COB’s on the coolers.

MechaTronix performs thermal compatibility tests on all combinations of the Luxeon LED COB’s with the various standard coolers.

A major point of improvement according Koen Vangorp, General Manager of MechaTronix, is the extreme low internal thermal resistance of the Luxeon COB’s.

“Philips Lumileds clearly understood the mission of developing high lumen packages in combination with a low thermal resistance. Maybe it is not so obvious to understand what this means because most LED manufacturers offer an external thermal measurement point and all publish similar numbers for these, but the consequences are enormous. With these low thermal resistances from junction to case Philips Lumileds is able to keep their junctions easily 10 to 15 degrees Kelvin lower than most chip-on-board modules on the market. And that immediately affects the life time of the LED dies in a very positive way. Either designers can take advantage of this by using smaller LED coolers, or just use the same LED coolers like they did before but gain on life time.”

About MechaTronix
MechaTronix was founded as a creative designer & manufacturer of high end mechanical plastic & metal parts. With its Asia-based headquarters in Kaohsiung Taiwan, MechaTronix became a powerhouse at designing and manufacturing heat sinks and thermal solutions for OEM and LED lighting applications. Strategic partnerships with major LED manufacturers and sharing our thermal knowledge with their luminaire designers are our core missions. Simple passive cooling, advanced heat pipe technology or active cooling solutions? MechaTronix offers of the shelf and tailored solutions to its worldwide professional customer base.
For more information about the company, please visit : www.mechatronix-asia.com