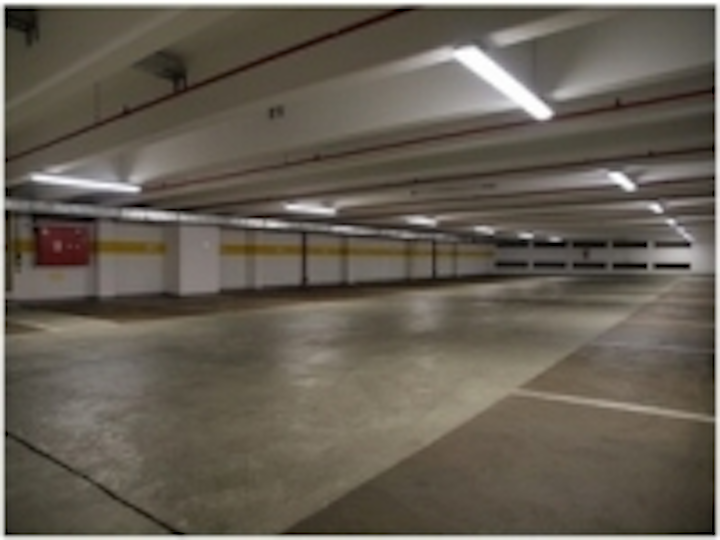 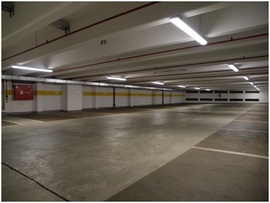 As part of a pilot project to reduce energy consumption, the fluorescent luminaires in the Nuremberg parking garage at Jakobsmarkt were exchanged for intelligent LED luminaires from SchahlLED Lighting. Equipped with Duris E 3 LEDs from Osram Opto Semiconductors, each luminaire has an integrated motion sensor that switches basic illumination to maximum output only where required. Combined with the energy efficiency of the LEDs, this function saves an impressive 70% on power consumption.

“The combination of the luminaires and our low-power LEDs has enabled the operator to slash energy consumption in the parking garage,” explained Andreas Vogler, product manager at Osram Opto Semiconductors. “One LED luminaire consuming 35 W or 15 W in basic illumination mode is needed in order to actively illuminate two parking spaces where one fluorescent lamp with a typical system power draw of 75W was formerly required to accomplish the same feat.”

Using a motion sensor, an intelligent control system within the luminaires activates the lighting in the building, whereas only selecting maximum output in the locations where it is required. Luminaires installed in the vicinity increase their brightness to the maximum output of 35W only if a vehicle is driving through the garage or a pedestrian is moving. If not activated by the motion sensor, they operate at a much lower basic illumination level, consuming only 15W, reducing energy consumption and operational costs. As a result, the activation period per parking deck is cut to a third (or less) of the former value.

“By the time the project had been under way for just a few months, we had already saved a great deal of energy and, therefore, costs – despite it being the busy winter months. We expect the activation period to sink further in the summer. The acquisition costs for the connected luminaires will be repaid within as little as three years,” explained Erich Obermeier, managing director of SchahlLED Lighting GmbH.

Light solution for the future

“After extensive comparative tests, replacing the fluorescent lamps in the parking garage with intelligent LED system luminaires was an easy decision to make, as we were looking for a future-oriented solution and found it in groundbreaking LED technology,” said Gerald Stuible, managing director of the parking garage company. “Above all, the good experience we had with the pilot program was what convinced me to opt for a lighting solution from Osram Opto Semiconductors and SchahlLED Lighting. With the luminaires that are now installed, we can implement a light solution for the future.”

Due to their high standard of quality, the Duris E 3 LEDs can be expected to last for over 50,000 hours in this application, even operating at full load, which further minimizes maintenance costs. With the IPL series luminaires, the LEDs will only be operated at maximum output for a fraction of the time, leading to an expected service life of over ten years. As an additional bonus, the uniform light emitted by the Osram LEDs illuminate the parking spaces are extremely effectively while also cutting costs.

The intelligent parking garage luminaire will be unveiled at the Parken 2013 tradeshow, June 19-20, 2013 in Wiesbaden, Germany. Visit SchahlLED Lighting GmbH's booth No. 1-D06 in Hall 1.