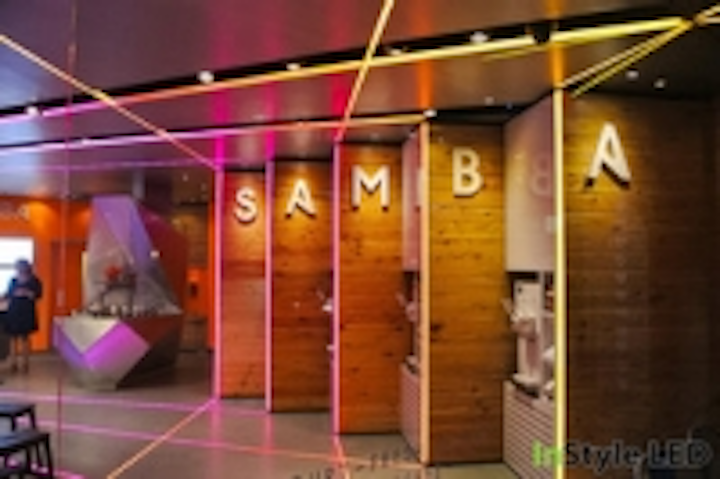 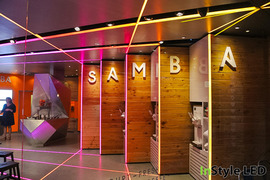 Samba Swirl has opened its 4th frozen yogurt store located on Jamestown road in Camden. The new store has undergone a complete rebrand and has been fully fitted with InStyle LED programmable LED Tape through the floor, celling, signage and around the yogurt machines to create amazing chasing, pulsing and colour changing patterns.

The LED lights flow from outside the store to the yogurt machines inside and then on to the counter.

The store was designed by Architect, Jonathan Mizzi from Mizzi Studios who contacted InStyle LED Ltd to create and program the unique lighting effect for the store. The InStyle lighting programmer worked with the Architect to create powerful combinations of colours and patterns to highlight the theme of the store. With the full control the LED tape and control gear offers, the lighting has the ability create and set any mood the owner requires. The LED tape has been fitted into frosted covered extrusion to diffuse the LED light to give a smooth effect when looked at as opposed to individual LED’s.

The programmable RGB DMX LED Tape can be controlled using the standard DMX512 protocol. Every 3 LED’s of the tape can be individually controlled to create any colour and dimming from 0-100%. This allowed the lighting programmer to create chasing and pulsing effects. The Samba Swirl store required a total of a 100m of the DMX RGB LED Tape.

InStyle LED also provided custom manufactured frosted extrusion for the ceiling and floor which needed to be strong enough to be walked on by the customers.

Samba Swirl provides a Californian style frozen yogurt in a wide range of delightful flavours. As a healthier alternative to ice cream Samba Swirl yogurt is zero to low fat, lower calories, low in cholesterol, low in sodium and is packed with live & active probiotic cultures.