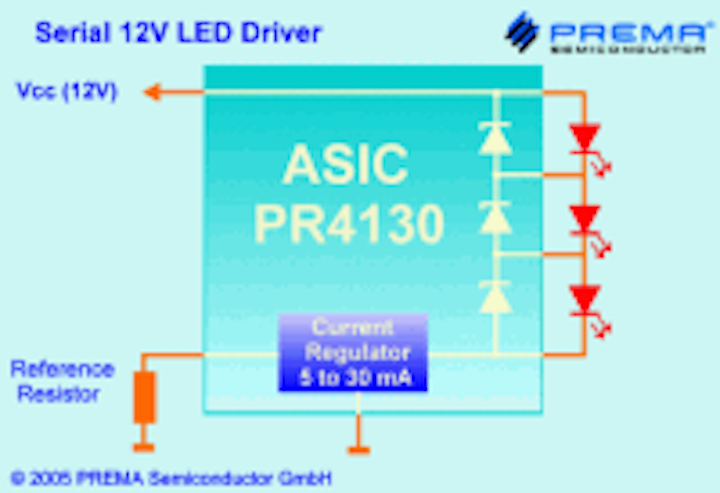 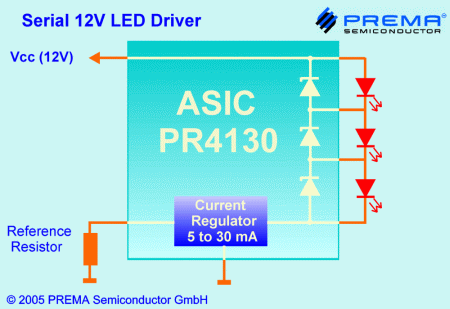 Standard light sources such as bulbs are replaced by LEDs or LED strings in more and more applications now. The ASIC manufacturer PREMA Semiconductor offers the new constant current driver PR4130 controlling up to three LEDs in series. Even if one or two LEDs are disconnected or short circuited, the current and the brightness remain constant, thus providing a high reliability.

The supply voltage of the PR4130 ranges from 10V up to 14.4V or a maximum voltage of 21V for short time. Necessary for operation is only one external resistor, which defines the LED current in a range from 5mA up to 30mA.
Due to the very accurate current control the brightness of the LEDs is very constant and almost independent of the supply voltage and the number of connected LEDs.

The PR4130 circuit is compensating the disadvantage of serial LED circuits, that a failure in one LED will lead to the disfunction of the whole string. A Zener diode circuit provides a current flow also with a break of one LED and together with the current control the brightness of all connected LEDs stays smooth and constant also with short circuit or break of one or two LEDs. The Zener diode circuit has been defined for forward voltages of the LEDs of up to 2.3V.

Due to the supply voltage of around 12V the PR4130 is well suited for automotive applications such as drivers for the third high mounted stop light (Center High Mount Stop Light) consisting of a string of more LEDs. In this case several PR4130 can be used in parallel, uniformly distributed current is guaranteed by the current control also at a failure of a single LED. Further applications are decoration light strings with 12V power supplies.

The PR4130 is offered as a standard cell for design of an analog ASIC. Production of a custom specific standard cell IC can be reasonable for annual amounts from several 10 k units. The NRE cost are comparatively low and adaptions, eventually necessary, will in most cases be implemented easily. Further information and a datasheet of the PR4130 are available on the web site www.prema.com/Application/pr4130_e.html.

General information about PREMA Semiconductor GmbH, Mainz
PREMA offers solutions for analog and mixed-signal ASICs
- with supply voltages from 0.9V up to 120V
- for the ultra low power range up to medium power
- development, design, production and test, all in one hand.