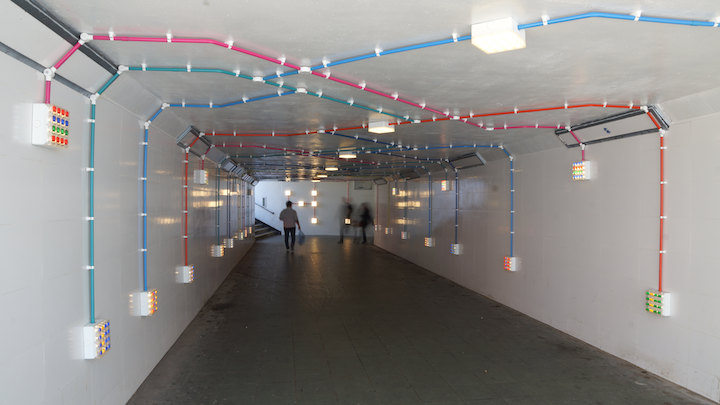 An innovative project with outdoor Cells luminaires, realised by artist and designer Jack Wates together with local young people

Wellington Street Weave art project has chosen Reggiani’s fixtures to transform the Wellington Street underpass in Luton, Bedfordshire. The project was conceived by artist and designer Jack Wates and developed through a series of workshops with local young people in Luton. The design takes the form of a weave of colourful conduit that wraps the tunnel to support an array of bespoke Reggiani light Cells. Gentle animation across these luminaires produces colourful shadows that shift from wall to wall while minimising fluctuation in the overall light intensity of the tunnel.

The workshops were programmed to allow participants to engage with a range of design methodologies throughout various stages of the project. They began with a session on site surveying the tunnel and developed into a series of drawing exercises that explored potential conduit patterns and lighting configurations. This then fed into the creation of the large, scaled model, which was devised to be magnetic to allow different schemes to be discussed and tested quickly as a group. The resulting design materialised as a sculptural weave of conduit, expressed as interlocking diagonals on the ceiling plane that became parallel vertical drops on the side walls.

The second set of workshops was about engaging participants with the practice of lighting design. By working with Reggiani’s versatile Cells luminaires, many different configurations of colour, optics and diffusers could be explored. Cells guarantees an IP66 rating thanks to the hard robust die-cast aluminium body for electronic components while the diffusers are IK10 shock resistant. Through the testing of all the different optics available for the Cells (narrow, medium, large, rectangular, asymmetric or double asymmetric), comparisons could be made between the lit effect that each would produce, as well as the issue of glare when mounted at different positions on the wall. This led to a final configuration in which fittings with asymmetric-beam distribution were used high up on the wall to light the soffit while fittings with a rectangular-beam distribution were placed low down, to light the opposite wall while minimising glare.

The participatory workshops were also about exploring light and colour. By affixing custom made coloured gels to the front of each of the 16 individual reflectors the concept of colour mixing was explored. The aim was to produce white light in the space while producing coloured shadows on the walls and ceiling. This was ultimately achieved using balanced combinations of blue and amber in some fittings and red, green and blue in others. As the tunnel fills up with people, the strength and saturation of the coloured shadows increases naturally due to more of the fixtures, which was out the shadows being blocked by people’s presence.

One element of the original brief questioned whether the underpass could be used to house events while maintaining access through it or whether it could become a backdrop to support other local creative projects. Since the opening in September, the underpass has featured in a music video by local artist Sadface Poet and Lavz.

The project was commissioned by Revolution Arts and supported by Luton Council and Volker Highways.

WE ARE REGGIANI, THE ILLUMINATION COLLECTIVE

Established in 1957, Reggiani is now an International benchmark in the lighting industry, a community of lighting experts that provides its customers with cutting-edge technological solutions with an open, collaborative and problem solving approach. The constant development of innovative products and the expertise gained in over 50 years of activity in the field has outlined an increasingly open exchange with the world of lighting designers and architects, with whom Reggiani has established a relationship founded on sharing ideas and best practices and to whom Reggiani provides solutions and support to meet any creative requirement. Reggiani has a widespread distribution in 80 Countries worldwide and its offices in Italy, USA, UK, China, France and Russia cover an area of 110,000 m2, including areas devoted to production, offices, showrooms and warehouses.