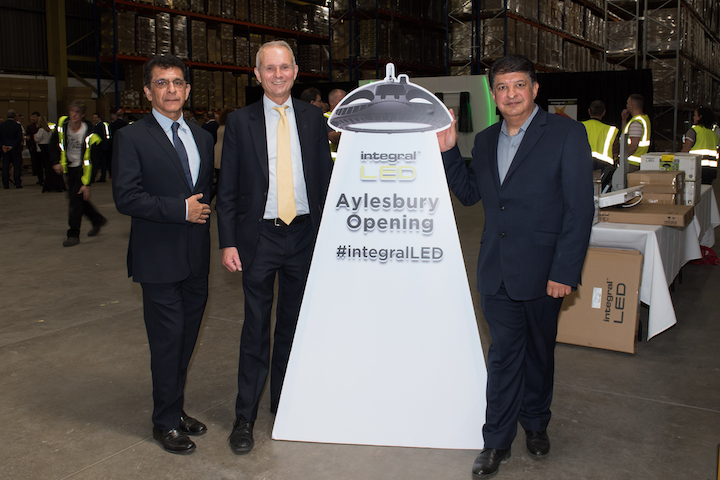 LED lighting manufacturer has relocated its European logistics and warehouse operations to Aylesbury. The new Rabans Lane site will be central to a network of supply links to the company’s resellers throughout the UK and to support their subsidiaries in France, Netherlands and Spain. At an official ceremony on Friday 13th September the management team were joined by Sir David Lidington, MP for Aylesbury, and the Town Mayor, Councillor Mike Smith, to celebrate the official opening of the new facility that marks a major step to accelerate European-wide trading despite the existing backdrop of confusion caused by Brexit.

“Whatever the outcome of the UK Government’s negotiation with the EU, we are committed to providing improved supply-side support to our customers throughout the domestic market and on the continent. Faster stock deliveries and ultimately more competitive product margins will provide a major benefit to trading partners ahead of challenging market conditions. Ultimately, we believe that British businesses have an exciting future in the European market if they are agile and remain responsive to the demands for disruptive technologies like LED lighting,” commented Sunil Kotecha, MD of Integral Memory plc.

“I welcome the vote of confidence Integral has given to the business future of Aylesbury”, noted The Rt Hon. David Lidington. “It is heartening that this company is doing what it needs to be successful in the 21st century – designing lighting that delivers better value for money for end customers."

“The need for innovation is never going to let up. There will always be opportunities for canny and innovative companies to increase their market share. Whatever happens with Brexit, the simple facts of geography are not going to change. The EU will remain the single most important trading market for companies in the UK."

"I wish every member of the team at Integral success.”

Since their arrival six years ago, Integral LED has built its LED lighting brand on a quality message at keen prices. A 25-year track record of managing technology and products in the semiconductor market shaped their approach to the lighting market. An in-house, fully-equipped lighting laboratory was operational one year before they sold a single lamp. In recognition of this vigilance, Integral LED earned a reputation for reliability and picked up a record-breaking eleven Which? Best Buy Awards along the way. Now they are a familiar choice at trade counters across the country and aim to become a well-known option throughout Europe.