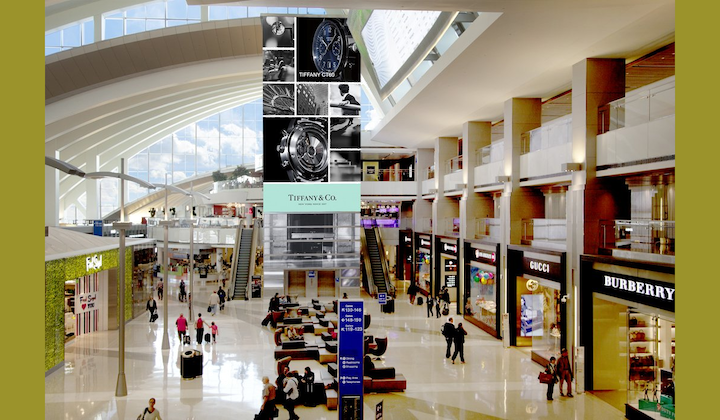 MONTREAL, QUEBEC, CANADA — Back in 2013, Los Angeles International Airport, the world’s fourth busiest airport, initiated a massive installation of digital displays and technologies in the Tom Bradley International Terminal, making it a trendsetter for the airport and the larger transportation industry it is a part of. One of the terminal’s signature attractions, a 72-foot-tall, 4-sided LED tower dubbed the “Time Tower”, has received a significant upgrade with the integration of a RealMotion™ server that enables generative and interactive content, while simplifying content management and creation.

According to Director of RealMotion Geoffrey Platt, the addition of the RealMotion™ server increases the fundamental value of the LED display by streamlining operation and adding flexibility.

“The LAX Time Tower quickly became a world-famous digital media project because, in some measure, it instigated the design currents we still see today. However, even the most high-profile installations can be improved as technologies evolve,” Platt said. “For this specific four-sided LED experience, the original head-end solution is where the field has evolved the most — and RealMotion embodies that evolution. Our product’s innate ability to use real time rendering capabilities is what increases flexibility, performance and creative possibilities. The footprint of our system alone gives a notion of how far we’ve come: less than 20% of the rack space with more than double the throughput. Combining these capabilities with the newest version of ISAAC, an integrated scheduling and automation control platform created by Smart Monkeys, gives this iconic installation many more years of delight to travelers.”

The nickname “Time Tower” comes from some of the original content pieces featuring evocative visuals inspired by a virtual clock tower, or clock face, shown near the top of the displays. While the content itself has remained the same, the RealMotion server has greatly increased what the operator can do with that content, in terms of making changes.

“The Time Tower is a complicated piece of visual technology, consisting of both 6mm and 10mm LED displays with non-traditional aspect ratios,” Platt added, “This contributes to the challenge for content creators. Through RealMotion’s visual rendering system, we’ve simplified the delivery format and made the whole process less obtrusive. This also brings benefits to advertisers, media companies and operators as these new tools will decrease the cost and effort to produce content in these non-traditional formats.”

Another benefit of the new server is simplifying transitions between content pieces. Previously, changing ‘interstitial content’, as transitions are called, required re-rendering the entire content piece with a new beginning or ending transition. Now, those interstitial pieces can be composited on the existing visuals, without any need to process or re-work the originals. It is a cost-effective solution for the operator who has to swap and reschedule content on a regular basis.

“Using the latest RealMotion servers to simplify content management is a big upgrade,” Platt said. “But we’re also bringing increased possibilities to future content contributors by supporting new creative tools such as Notch and RealMotion Creator which are used to create real-time visual content. We’re proud to be involved in this project and are excited to be part of the industry’s movement toward advanced digital content solutions.”

RealMotion™ began as the technology division of the award-winning multidisciplinary studio Float4, and now operates as an independent technology company, marketing its RealMotion product line to audiovisual professionals all over the world.

Headquartered in Montreal QC, Canada, RealMotion™ (www.realmotion.com) is the technology division of the award-winning experiential design studio Float4 (www.float4.com). RealMotion’s mission is to provide a superior real-time platform empowering ideation through the prototyping, execution and monitoring of next generation immersive and interactive environments. Designed for both AV integrators and creative minds, the RealMotion platform is built to serve as the backbone of digital media production pipelines.