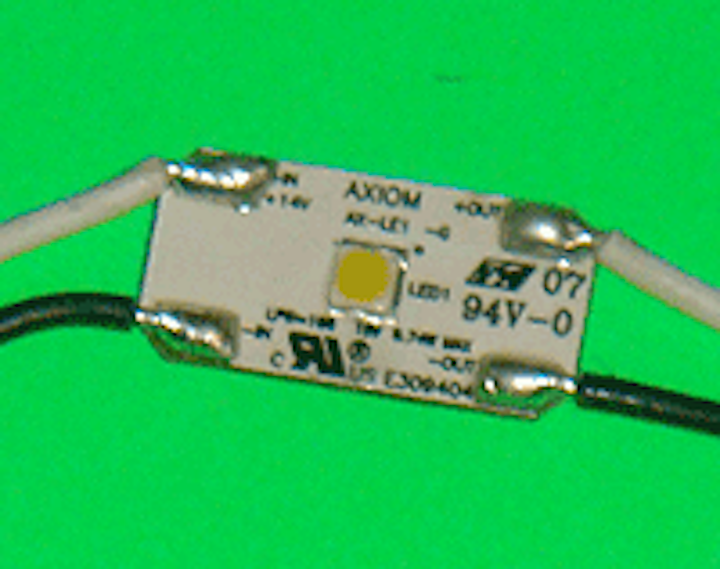 Axiom Power Corporation has introduced a white LED system for lighting channel letters that it claims has the highest lumen per watt rating and lowest cost per linear foot on the market.

The Las Vegas company says that its AX-LE1-WG line of LED modules have very high efficacy, and are equivalent brightness to designer white neon. The modules contain new, ultra-high efficiency Nichia LEDs from a single bin.

The Axiom AX-LE1-WG uses only 0.7 watts per module, and features a new modular architecture that does not use power-limiting resistors to control power to the product.

The AX-LE1-WG module measures 1 x 0.5 inch and is 1/8-inch high. It is pre-wired for two LED modules per linear foot (equivalent to 1.4 watts per linear foot). Axiom says that this is almost 3x lower power than competing LEDs.

“Our white AX-LE1-WG is the perfect product for channel letters as it is priced the same as the neon it replaces but is now one-third the power of other LED systems. This means the sign company now requires fewer power supplies,” said Manuel Lynch, one of the founders of Axiom Power Corporation.

Lynch told LEDs Magazine that the modules use new Gaia LEDs from Nichia that contain four chips in series and have a forward voltage of 14.7 V, so the drive current is in the 20-25 mA range. "The Nichia LED is rated for 100 lm/W at the current/voltage we are driving it at," says Lynch.

The product has already been specified, designed into, and used on major retail sign programs. "It introduces a solution that is now lower cost than neon and almost one-tenth the power,” continued Lynch.

Each UL Recognized Wet Location module is weather-coated for resistance to moisture. The modules come with VHB tape and due to the high efficiency of the single-bin Nichia LED technology they can be mounted to plastic, aluminum or steel letters without compromising the 50,000 hour lifetime.